Presentation on theme: "MOTION Standards Standards : S8P3 – Investigate the relationship between force, mass, and the motion of objects. S8P3a – Demonstrate the effect of balanced."— Presentation transcript:

1 MOTION Standards Standards : S8P3 – Investigate the relationship between force, mass, and the motion of objects. S8P3a – Demonstrate the effect of balanced and unbalanced forces on objects in terms of gravity, inertia, and friction. Essential Questions: How can you describe an object’s motion? What causes an object’s motion to change?

2 Motion An object is in motion if its distance from another object is changing.

3 Reference Point A place or object used for comparison to determine if something is in motion.

5 Speed The speed of an object is the distance the object travels per unit of time. Speed = Distance Time

7 Instantaneous Speed The rate at which an object is moving at a given instant in time.

8 Velocity Speed in a given direction.

9 Slope The steepness of a line on a graph. Slope = Rise Run

11 Wait for me to give you your assigned seat. Once you are seated, open your textbook to p.320 and open your composition book. Have a pencil/pen ready.

13 Warm-Up: In your composition book, solve the following: If a snowflake is falling at 1m/s, and 4 seconds later, it is falling at 5m/s, what is its rate of acceleration?

14 Force NEWTON A force is a push or a pull, described by its strength and the direction in which it acts, measured in SI unit called the NEWTON.

15 Net Force The combination of all forces acting on an object; it determines whether an object moves and also in which direction it moves.

16 Unbalanced Forces Cause an object to start moving, stop moving, or change direction. Result in a net force and cause a change in the object’s motion.

17 Balanced Forces Equal forces acting on one object in opposite directions. Do not change the object’s motion.

19 Warm-UP If I were to drop a golf ball and a ping-pong (table tennis) ball from the same height at the same time, which would reach the ground first? Explain your answer.

20 Friction The force that two surfaces exert on each other. Strength depends on how hard the surfaces push together and the types of surfaces involved.

21 Static Friction The friction that acts on objects that are not moving. Ex: your desk sitting on the floor.

22 Sliding Friction The friction that occurs when two solid surfaces slide over each other. Ex: sticky ballet shoe powder to prevent slipping

23 Rolling Friction The friction that occurs when an object rolls across a surface. Ex: wheels on skateboards

24 Fluid Friction The friction that occurs when a solid object moves through a fluid. Ex: cyclists’ streamlined helmets

28 Weight and Mass MASS MASS – a measure of the amount of matter in an object (kg). WEIGHT WEIGHT– The force of gravity on a person or object at the surface of a planet..

29 Free Fall When the only force acting on an object is gravity, it is in free fall. The force of gravity is unbalanced, which causes an object to accelerate. Acceleration is 9.8m/s 2

31 Terminal Velocity The greatest velocity a falling object reaches when the force of air resistance equals the weight of the object.

32 Projectile Motion projectile An object that is thrown is a projectile. A projectile will fall at the same rate as any dropped object.

35 Inertia depends on mass. The more mass an object has, the harder it is to change the rate of acceleration.

38 Momentum A characteristic of a moving object that is related to the mass and velocity of the object. Momentum = Mass x Velocity

39 Law of Conservation of Momentum The total momentum of any group of objects remains the same, or is conserved, unless outside forces act on the objects.

40 Centripetal force Any force that causes an object to move in a circular path.

41 Pressure A force exerted over an area on the surface of an object.

42 Pressure decreases as the area over which a force is distributed increases. It is measured in Newtons/square meter (N/m 2 ) …aka the PASCAL Write this ------------ 

43 Fluid Pressure All of the forces exerted by the individual particles in a fluid combine to make up the pressure exerted by the fluid. Air pressure is an example of fluid pressure.

44 Balanced Pressure In a stationary fluid, pressure at a given point is exerted equally in all directions.

48 Buoyancy The ability to float. The buoyant force acts in the direction opposite to the force of gravity, so it makes an object feel lighter.

49 Archimedes’ Principle The buoyant force acting on a submerged object is equal to the weight of the fluid the object displaces.

50 Pascal’s Principle When force is applied to a confined fluid, the change in pressure is transmitted equally to all parts of the fluid. HYDRAULIC SYSTEM A HYDRAULIC SYSTEM multiplies force by applying the force to a small surface area; the increase in pressure is then transmitted to another part of the confined fluid, which pushes on a larger surface area.

51 Bernoulli’s Principle As the speed of a moving fluid increases, the pressure within the fluid decreases. LIFT LIFT = an upward force

Download ppt "MOTION Standards Standards : S8P3 – Investigate the relationship between force, mass, and the motion of objects. S8P3a – Demonstrate the effect of balanced." 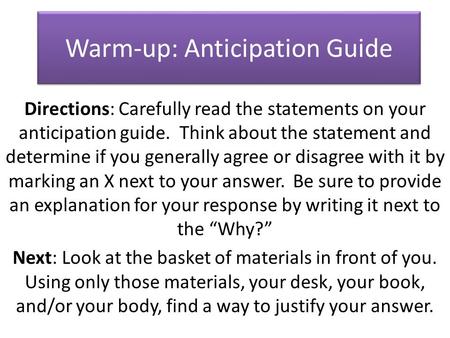 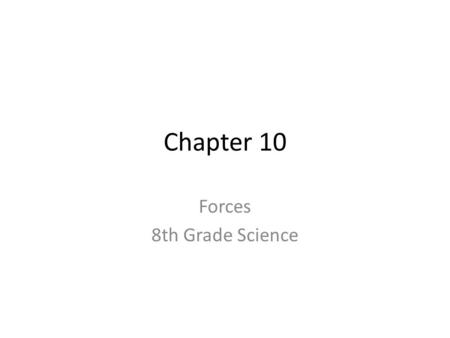 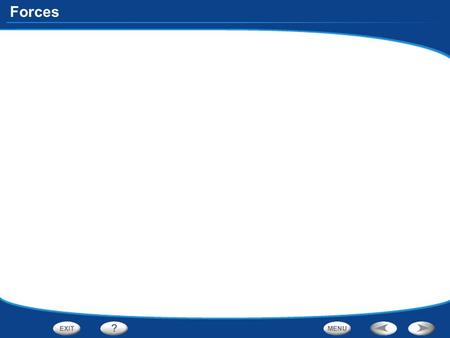 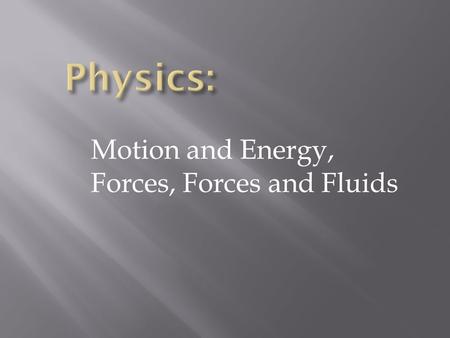 Motion and Energy, Forces, Forces and Fluids. Motion and Speed.