Presentation on theme: "Jewish prophets predicted a savior or Messiah, would arrive & lead the Jews to freedom Many believed that the Messiah was a Jew from Nazareth named Jesus."— Presentation transcript:

2 Jewish prophets predicted a savior or Messiah, would arrive & lead the Jews to freedom Many believed that the Messiah was a Jew from Nazareth named Jesus

3 Not born in 1 CE! Born 6-4 BCE Died 30-36 CE Story of his birth to Mary and Joseph in Bethlehem is basis of Christmas tradition Little known of early life. Most writings focus on the last few years of his life

4 Gospels: Much of what we know about Jesus’ life comes from the Gospels. Of many books written after his death, 4 Gospels were chosen as the accepted stories of his life and work.

5 About age 30, he began teaching in Judea Teachings included many ideas from Judaism monotheism Ten Commandments laws of Moses belief in the prophets

6 Messiah (Savior) Called himself the Son of God & the promised Messiah (Savior) who would rescue the Jews He preached about: personal relationship w/ God for all people love of friends/enemies forgiveness of sins eternal life after death for those who repent their sins

8 Jewish leaders felt challenged Romans were afraid he could lead a rebellion Visited Jerusalem in 29 CE and greeted by some as a King who would rescue the Jews He was betrayed by a Disciple and arrested by Roman soldiers Pontius Pilate, Roman governor of Judea, sentenced him to death by crucifixion for treason against the Roman Empire.

9 Gospels say he died, was reborn after 3 days, ascended to heaven to be with God. The disciples became even more convinced that Jesus was the Messiah They called him Jesus Christ From Greek word Christos, meaning ‘savior’ New religion formed, called Christianity The cross becomes the symbol of Christianity

10 Christians would not worship the Emperor as a God Suspected of disloyalty to the Empire, evil practices Blamed for the troubles of the Empire 1st Christians are executed if caught, killed in arenas for sport- crucified, burned, or fed to animals Christians became Martyrs- those who have lost their lives for a cause

14 Formal Church structure created Church influenced by Roman hierarchy Priests – led small groups at local level Bishop – supervised several local churches Pope – eventually the Bishop of Rome became the head of the Church Apostle Peter, the first Bishop of Rome, “the rock” on which the Church would be built

15 The Bible combined: Old Testament: Jewish Torah and other writings And New Testament: 4 Gospels, letters of Paul and other books about life and teaching of Jesus

Download ppt "Jewish prophets predicted a savior or Messiah, would arrive & lead the Jews to freedom Many believed that the Messiah was a Jew from Nazareth named Jesus." 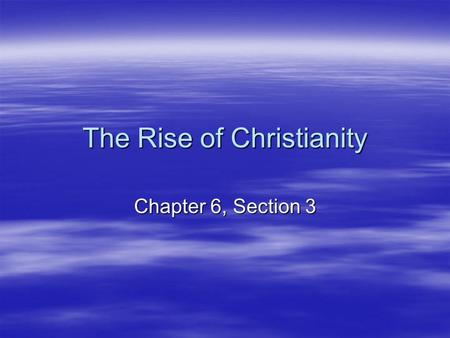