5 Names and Boiling points of alkanes
The name of the alkane varies according to the number of C atoms present in the chain.

7 Alkanes We can make a table of members of a homologous series of straight-chain alkanes. Successive members differ by one CH2 unit. The names each end in -ane. The prefix assigned indicates the number of carbon atoms. Example: CH4 is the alkane with a single carbon atom; it is called methane. The next member of the series is C2H6, with two carbon atoms; it is called ethane. The formulas for alkanes may be written in a notation called condensed structural formula. This notation shows which atoms are bonded to one another but does not require that we draw in all of the bonds. Notice that each carbon in an alkane has four single bonds.

8 Structures of alkanes VSEPR theory predicts each C atom is tetrahedral. Rotation about the C–C bond in alkanes is relatively easy.

11 Nomenclature of Alkanes
Organic compounds are named according to rules established by the International Union for Pure and Applied Chemistry (IUPAC). To name alkanes: Find the longest chain and use it as the base name of the compound. Groups attached to the main chain are called substituents. 2. Number the carbon atoms in the longest chain starting with the end closest to a substituent. The preferred numbering will give substituents the lowest numbers.

12 3. Name and give the location of each substituent.
A substituent group formed by removing a H atom from an alkane is called an alkyl group. Alkyl groups are named by replacing the –ane ending with -yl. Example: CH4 is methane, and a –CH3 group is a methyl group. Similarly, CH3CH3 is ethane, and a –CH2CH3 group is an ethyl group. And CH3CH2CH3 is propane, and therefore a –CH2CH2CH3 is a propyl group. 4. When two or more substituents are present, list them in alphabetical order. When there are two or more of the same substituent, the number of that type of substituent is indicated by a prefix: (i.e., “dimethyl” indicates two methyl group substituents).

13 Cycloalkanes Alkanes that form rings are called cycloalkanes.
Note that the general formula of cycloalkane is CnH2n and not CnH2n+2. Cyclopropane and cyclobutane are strained because the C–C–C bond angles in the ring are less than the 109.5 required for a tetrahedral geometry. Because of the strain in the ring, cyclopropane is very reactive.

14 Unsaturated Hydrocarbons (Alkenes)
Alkenes are unsaturated hydrocarbons that contain C and H atoms and at least one C-C double bond. Alkenes are named in the same way as alkanes with the suffix -ene replacing the -ane in alkanes. The first six alkenes in the homologous series where the double bond is between the first and the second are H2C=CH2 ethene CH3CH=CH2 propene CH3CH2CH=CH butene (or but-1-ene or 1-butene) CH3CH2CH2CH=CH pentene (or pent-1-ene or 1-pentene) CH3CH2CH2CH2CH=CH2 hexene etc.

15 Unsaturated Hydrocarbons (Alkenes)
If the double bond is located anywhere other than the first carbon, then its location is indicated by a number. CH3CH=CHCH3 but-2-ene or 2-butene CH3CH2CH=CHCH pent-2-ene or 2-pentene CH3CH2CH=CHCH2CH3 hex-3-ene or 3-hexene If a substance has two or more double bonds, the number of double bonds is indicated with a prefix . CH2=CHCH=CHCH ,3-pentadiene or 1,3-dipentene (and not 2, 4-dipentaene) CH2=CHCH=CHCH=CH ,3,5-trihexene or 1,3,5-hextriene

16 Alkynes Alkynes are hydrocarbons with one or more CC bond.
Ethyne (acetylene) is the simplest alkyne: HCCH. Alkynes are named in the same way as alkenes with the suffix -yne replacing the -ene for alkenes. 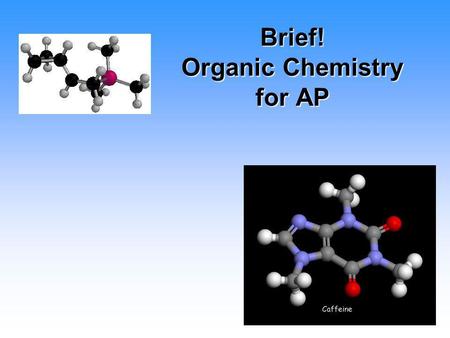 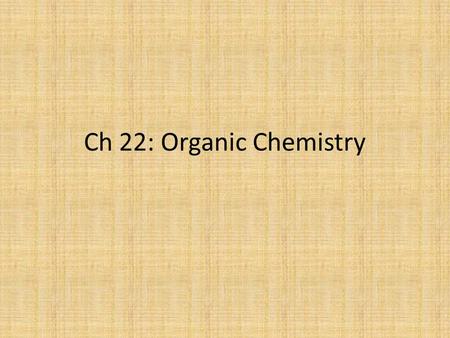 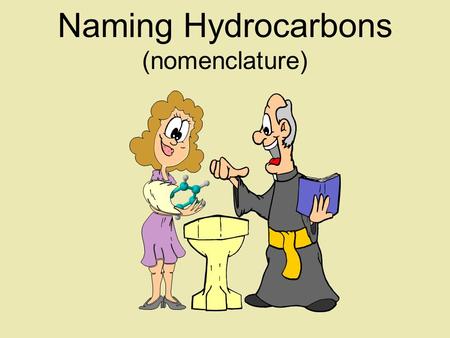 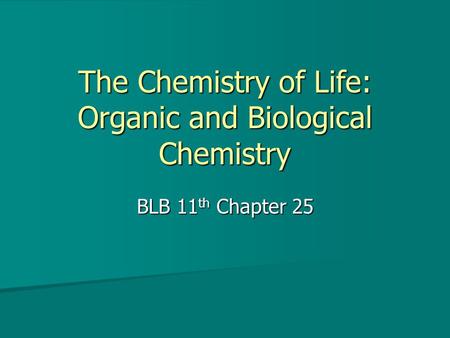 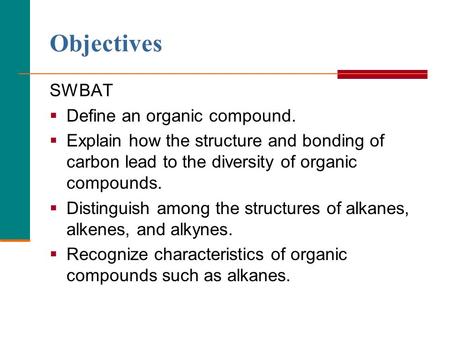 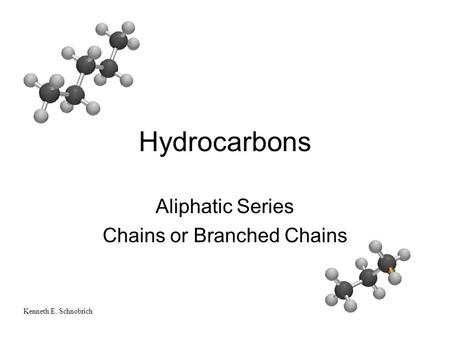 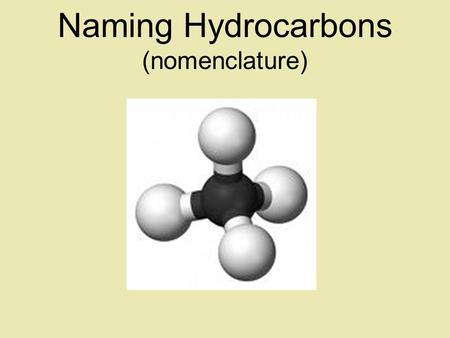 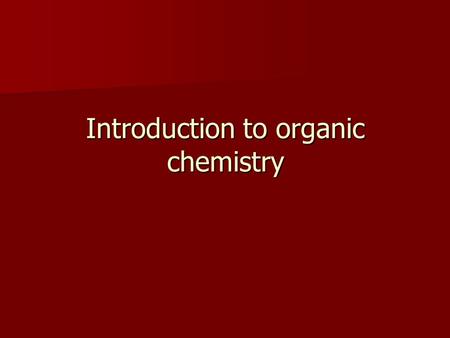 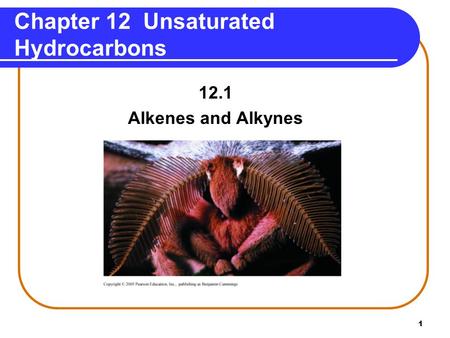 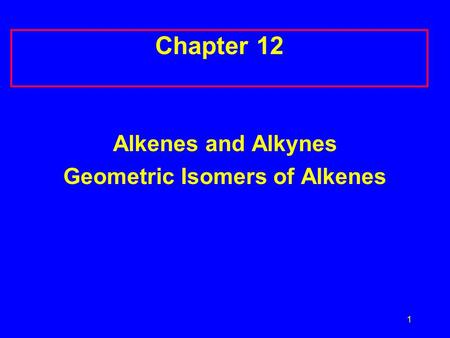 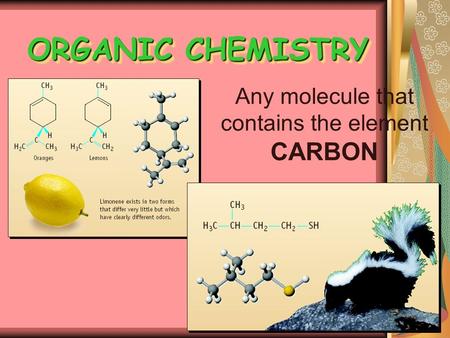 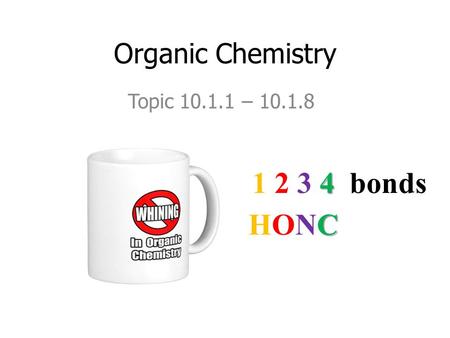 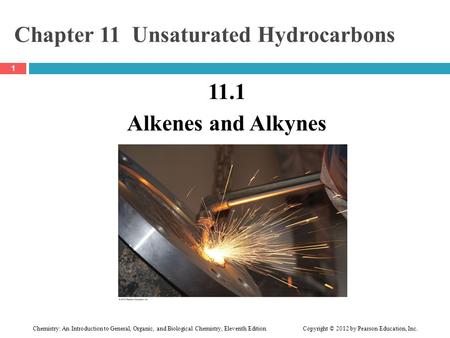