Presentation on theme: "How the Nervous System Works Responding to Stimuli"— Presentation transcript:

2 The Nervous System 1 Homeostasis The regulation of steady, life-maintaining conditions inside an organism, despite changes in its environment, is called homeostasis. Your nervous system is one of several control systems used by your body to maintain homeostasis.

8 The Nervous System 1 Synapses To move from one neuron to the next, an impulse crosses a small space called a synapse (SIH naps).

9 The Nervous System 1 Synapses When an impulse reaches the end of an axon, the axon releases a chemical. This chemical flows across the synapse and stimulates the impulse in the dendrite of the next neuron. Your neurons are adapted in such a way that impulses move in only one direction. Click image to view movie.

12 The Nervous System 1 The Brain The brain is divided into three major parts, the brain stem, the cerebellum (ser uh BE lum), and the cerebrum (suh REE brum).

13 The Nervous System 1 Cerebrum Thinking takes place in the cerebrum, which is the largest part of the brain. This also is where impulses from the senses are interpreted, memory is stored, and movements are controlled.

14 The Nervous System 1 Cerebellum Stimuli from the eyes and ears and from muscles and tendons, which are the tissues that connect muscles to bones, are interpreted in the cerebellum.

15 The Nervous System 1 Cerebellum With this information, the cerebellum is able to coordinate voluntary muscle movements, maintain muscle tone, and help maintain balance.

17 The Nervous System 1 Brain Stem The midbrain and pons act as pathways connecting various parts of the brain with each other. The medulla controls involuntary actions such as heartbeat, breathing, and blood pressure.

18 The Nervous System 1 The Spinal Cord Your spinal cord is made up of bundle of neurons that carry impulses from all parts of the body to the brain and from the brain to all parts of your body.

19 The Nervous System 1 The Spinal Cord A column of vertebrae, or bones, protects the spinal cord.

21 Somatic and Autonomic Systems
The Nervous System 1 Somatic and Autonomic Systems The somatic system controls voluntary actions. It is made up of the cranial and spinal nerves that go from the central nervous system to your skeletal muscles. The autonomic system controls involuntary actions, those not under conscious control, such as your heart rate, breathing, digestion, and glandular functions.

22 Safety and the Nervous System
1 Safety and the Nervous System Any injury to the brain or the spinal cord can be serious. A severe blow to the head can bruise the brain and cause temporary or permanent loss of mental and physical abilities. Spinal cord injuries can be just as dangerous as a brain injury. Injury to the spine can cause damage to nerve pathways and result in paralysis (puh RA luh suhs), which is the loss of muscle movement.

24 The Nervous System 1 Reflexes A reflex is an involuntary, automatic response to a stimulus. You can’t control reflexes because they occur before you know what has happened.

26 The Nervous System 1 Reflexes A reflex allows the body to respond without having to think about what action to take. Reflex responses are controlled in your spinal cord, not in your brain. Your brain acts after the reflex to help you figure out what to do to make the pain stop.

27 Drugs and the Nervous System
1 Drugs and the Nervous System Many drugs, such as alcohol and caffeine, directly affect your nervous system. When swallowed, alcohol passes directly through the walls of the stomach and small intestine into the circulatory system. This drug slows the activities of the central nervous system and is classified as a depressant. Heavy alcohol use destroys brain and liver cells.

Download ppt "How the Nervous System Works Responding to Stimuli" 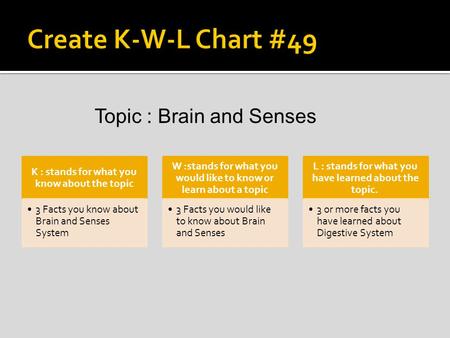 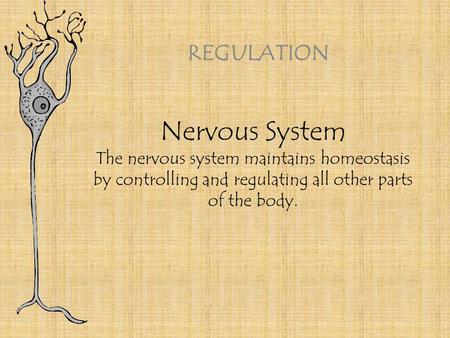 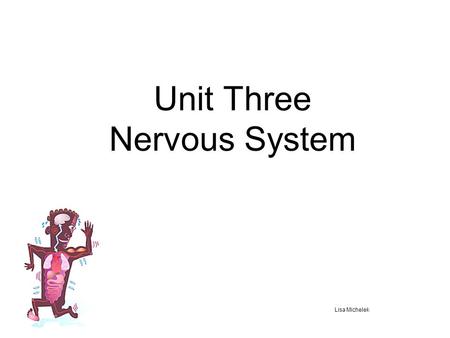 Unit Three Nervous System Lisa Michelek. Regulation Regulation is the life process by which cells and organisms respond to changes in and around them. 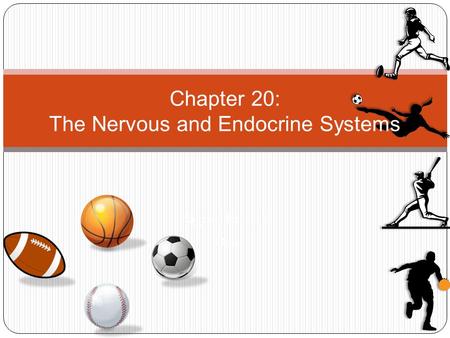 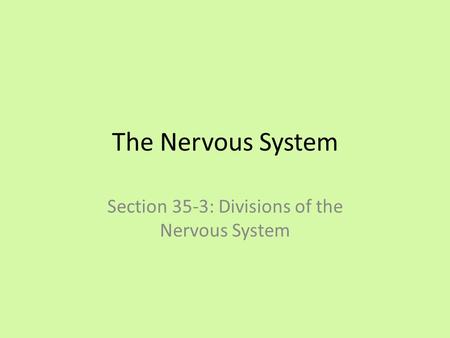 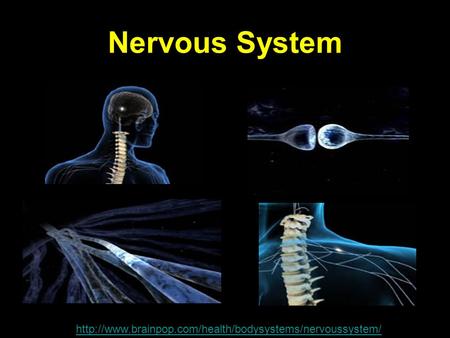 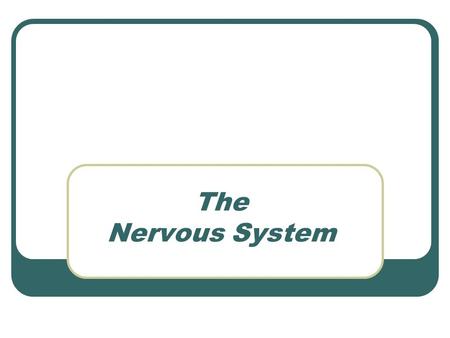