New Evidence That Quantum Mechanics Is Hard to Simulate on Classical Computers Scott Aaronson Parts based on joint work with Alex Arkhipov.

3 Shors algorithm was a hardness result for one of the central computational problems of modern science: Q UANTUM S IMULATION Shors Theorem: Q UANTUM S IMULATION is not in probabilistic polynomial time, unless F ACTORING is also Use of DoE supercomputers by area (from a talk by Alán Aspuru-Guzik)

4 Advantages of the new results: Based on generic complexity assumptions, rather than the classical hardness of F ACTORING Use only extremely weak kinds of quantum computing (e.g. nonadaptive linear optics) testable before Im dead? Give evidence that QCs have capabilities outside the entire polynomial hierarchy Today: A different kind of hardness result for simulating quantum mechanics Disadvantages: Apply to sampling problems (or to problems with many possible valid outputs), not decision problems Harder to convince a skeptic that your QC is solving the relevant hard problem Problems dont seem useful

5 First Problem Given a random Boolean function f:{0,1} n {-1,1} Find subsets S 1,…,S k [n] of the input bits, most of whose parities are slightly better correlated than chance with f E.g., sample a subset S with probability where Distribution of these Fourier coefficients for a random S Distribution for the Ss that youre being asked to output

6 This problem is trivial to solve using a quantum computer! H H H H H H f |0 Theorem 1: Any classical probabilistic algorithm to solve it (even approximately) must make exponentially many queries to f Theorem 2: This is true even if we imagine that P=NP, and that the classical algorithm can ask questions like Theorem 3: Even if we instantiate f by some explicit function (like 3SAT), any classical algorithm to solve the problem really accurately would imply P #P =BPP NP (meaning the polynomial hierarchy would collapse)

7 Ideally, we want a simple, explicit quantum system Q, such that any classical algorithm that even approximately simulates Q would have dramatic consequences for classical complexity theory We argue that this possible, using non-interacting bosons BOSONSFERMIONS There are two basic types of particle in the universe… Their transition amplitudes are given respectively by… All I can say is, the bosons got the harder job…

8 U Our Current Result Take a system of n photons with m=O(n 2 ) modes each. Put each photon in a known mode, then apply a random m m scattering matrix U: Let D be the distribution that results from measuring the photons. Suppose theres an efficient classical algorithm that samples any distribution even 1/n O(1) -close to D. Then in BPP NP, one can approximate the permanent of a matrix A of independent N(0,1) Gaussians, to additive error with high probability over A. Challenge: Prove the above problem is #P-complete

9 Experimental Prospects What would it take to implement this experiment with photonics? Reliable phase-shifters Reliable beamsplitters Reliable single-photon sources Reliable photodetector arrays But crucially, no nonlinear optics or postselected measurements! Our Proposal: Concentrate on (say) n=30 photons, so that classical simulation is difficult but not impossible

10 Summary Ive often said we have three choices: either (1)The Extended Church-Turing Thesis is false, (2)Textbook quantum mechanics is false, or (3)QCs can be efficiently simulated classically. For all intents and purposes? 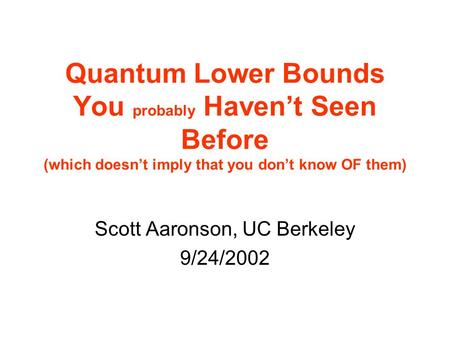 Quantum Lower Bounds You probably Havent Seen Before (which doesnt imply that you dont know OF them) Scott Aaronson, UC Berkeley 9/24/2002. 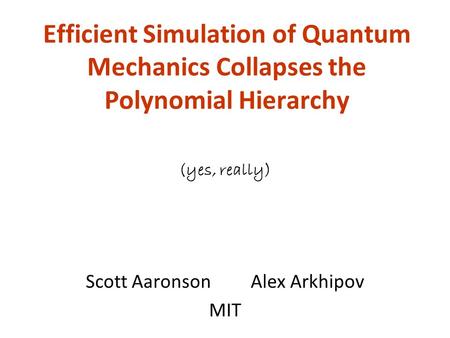 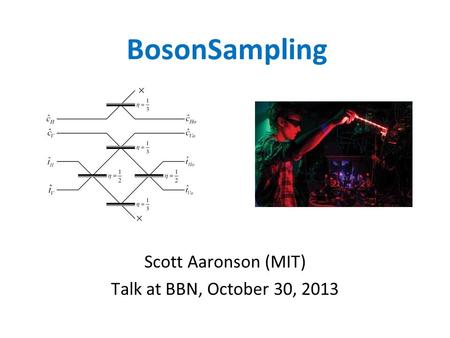 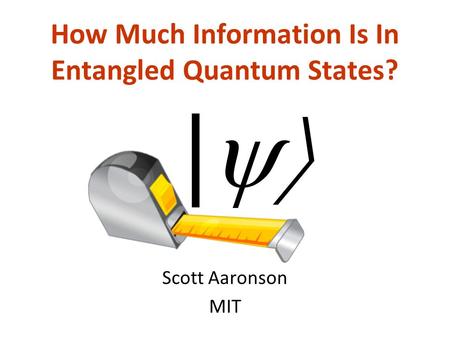 How Much Information Is In Entangled Quantum States? Scott Aaronson MIT | 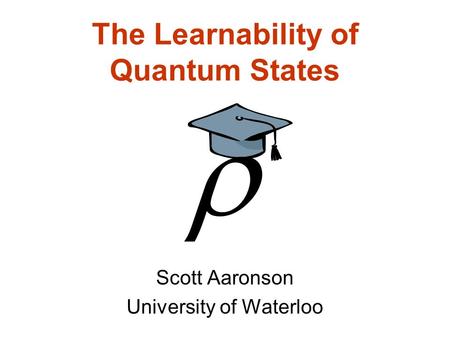 The Learnability of Quantum States Scott Aaronson University of Waterloo. 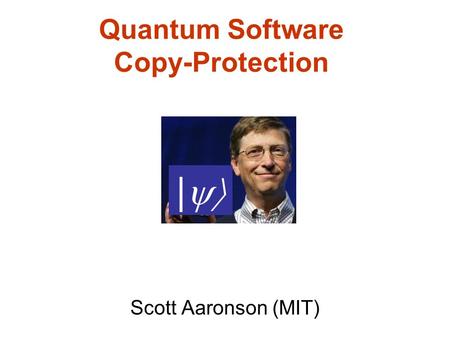 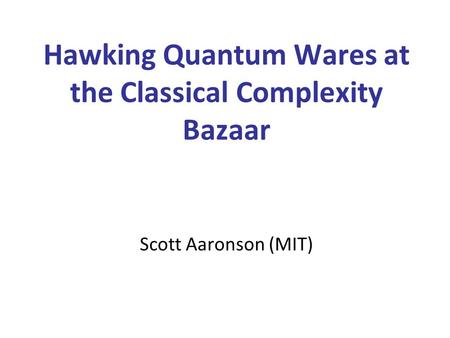 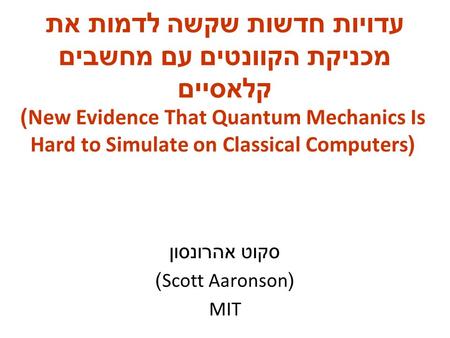 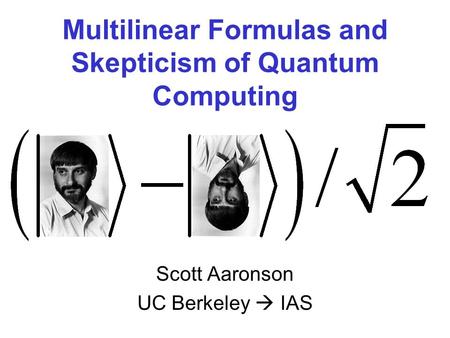 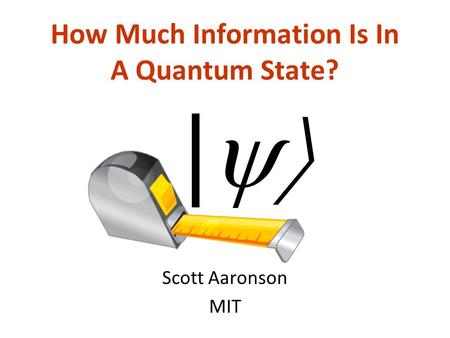 How Much Information Is In A Quantum State? Scott Aaronson MIT | 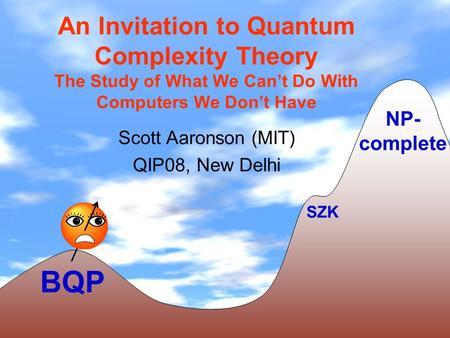 An Invitation to Quantum Complexity Theory The Study of What We Cant Do With Computers We Dont Have Scott Aaronson (MIT) QIP08, New Delhi BQP NP- complete. 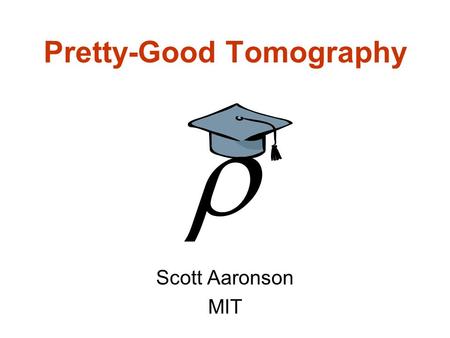 Pretty-Good Tomography Scott Aaronson MIT. Theres a problem… To do tomography on an entangled state of n qubits, we need exp(n) measurements Does this. 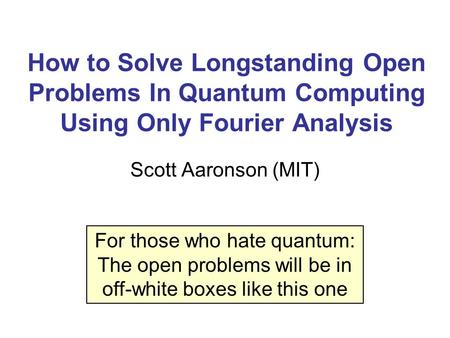 How to Solve Longstanding Open Problems In Quantum Computing Using Only Fourier Analysis Scott Aaronson (MIT) For those who hate quantum: The open problems. 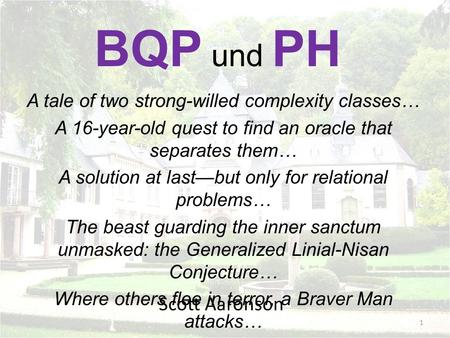 Scott Aaronson BQP und PH A tale of two strong-willed complexity classes… A 16-year-old quest to find an oracle that separates them… A solution at lastbut. 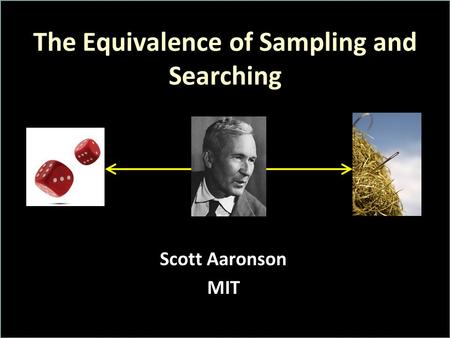 The Equivalence of Sampling and Searching Scott Aaronson MIT. 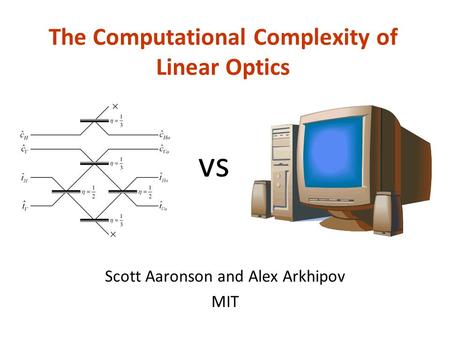 The Computational Complexity of Linear Optics Scott Aaronson and Alex Arkhipov MIT vs. 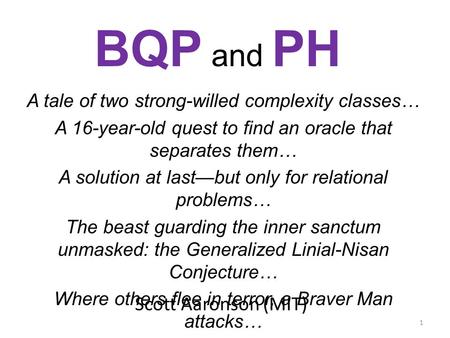 Scott Aaronson (MIT) BQP and PH A tale of two strong-willed complexity classes… A 16-year-old quest to find an oracle that separates them… A solution at. 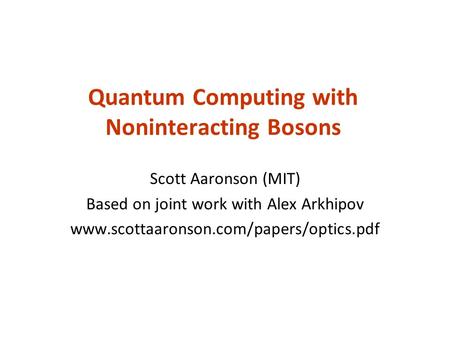 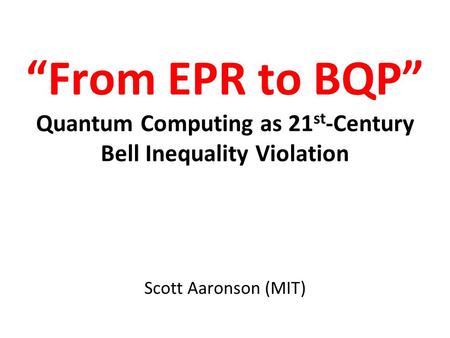 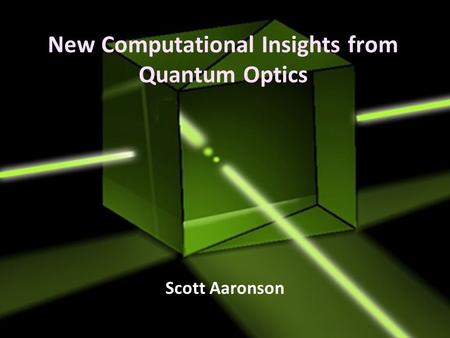