4 Society v. Culture People tend to use society and culture interchangeably, but they aren’t interchangeable. Society: A group of interdependent people who have organized in such a way as to share a common culture and feeling of unity. Society consists of people Culture consists of the material and nonmaterial products that people create.

5 The Components of Culture
Technology: Knowledge and tools people use for practical reasons. Sociologists are not only interested in skills, but also in the rules of acceptable behavior when using material culture. Ex. Computer hacking, illegal internet sites, texting, sexting, T.V chips, mod chips in video game consoles.

6 The Components of Culture
Symbols: Anything that represents something else. What are some symbols here at school? In the community? In the country?

7 The Components of Culture
Language: The organization of written or spoken symbols into a standardized system. We all speak the American form of English, but do we all speak it the same way?

8 The Components of Culture
Chevy Nova is not selling in Spanish speaking countries because No Va = It won’t go in Spanish… John F. Kennedy..Ich bin ein Berliner… Other examples?

9 The Components of Culture
Gestures- the way people use their bodies to communicate- hand, face, body language. Vary widely from culture to culture.

10 The Components of Culture
Values: Shared beliefs about what is good or bad, right or wrong, desirable or undesirable. The types of values held by a group help to determine the character of its people and the kinds of material and nonmaterial culture they create.

11 Cultural Comparison Yanomamo- Border of Brazil and Venezuela
Warfare and feats of male strength common. 30% of all deaths of males are from wounds sustained in battle. Farming villages can support 500 to 1,000 people, but the Yanomamo can only support 200 at a time. War splits the village into new settlements.

12 Cultural Comparison San- Society based on cooperation.
The San groups have their own territories and they don’t trespass on other land. All take part in search for food, except old, very young, sick. The game they hunt is shared throughout the group.

14 Norms Are all norms specific to all people and all locations across the country? Sociologists distinguish between two types of norms; Folkways Mores (MAWR-ayz)

15 Folkways Norms that describe socially acceptable behavior but do not have great moral significance attached to them. They outline the common customs of everyday life. Don’t put food in your mouth with a knife. Don’t let the American flag touch the ground when raising and lowering it. Shake hands when introduced to someone. Hold doors for women. Don’t spit Don’t burp after meals.

16 Mores Norms that have great moral significance attached to them.
Dishonesty, fraud, murder

19 Culture Traits An individual tool, act, or belief that is related to a particular situation or need. Using knives, forks, and spoons when eating. Greeting a friend by saying “Hi”, but being more formal when meeting a human-resource manager at a job interview.

23 Culture Variations Basic needs that all societies must develop to ensure fulfillment of basic needs. Cultures can be different, but people have basic needs that need to be met. Humans have the ability to meet those needs in a vast number of ways.

25 Ethnocentrism The tendency to view one’s own culture and group as superior. People in all societies are, at times, ethnocentric. The belief that the characteristics of one’s group or society are right and good helps build group unity.

26 Ethnocentrism At times, belief of the superiority of a society results from technological advances that make one group see others as inferior. When ethnocentrism, becomes extreme, culture can stagnate. By limiting the pool of acceptable members, groups and societies run the risk of excluding new influences that might prove beneficial.

27 Cultural Relativism The belief that cultures should be judged by their own standards rather than by applying the standards of another culture. In other words, people who practice cultural relativism attempt to understand cultural practices from the points of view of the members of the society being studied. Cultural relativism helps sociologists understand practices that seem strange or different from those of their own culture. Ex. Cows in India Cows play a vital role in feeding people in India, even though they are not eaten. Cows provide power for plowing, which prepares the land for planting. Cows provide milk, an important part of the Indian diet.

28 Variation Within Society
Cultural variations exist among societies and also within societies. Variation within a society come from different cultural subgroups. Subculture: A group with its own unique values, norms, and behaviors that exists within a larger culture. What are some examples of subcultures at NRHS? The United States?

30 Subcultures Most subcultures do not reject all of the values and practices of the larger society. Ex. Students who live in Chinatown in San Francisco still have many broad American cultural traits. Ex. going to public schools, playing with American toys, and working similar jobs. At the same time, they celebrate Chinese New Year and have different traditions and customs outside of American culture. 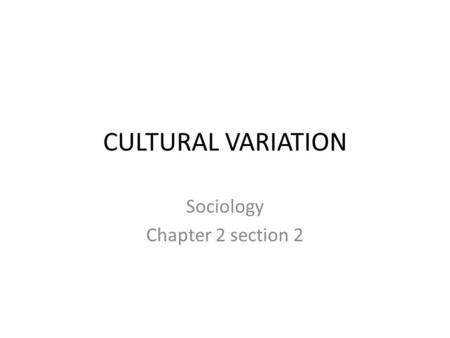 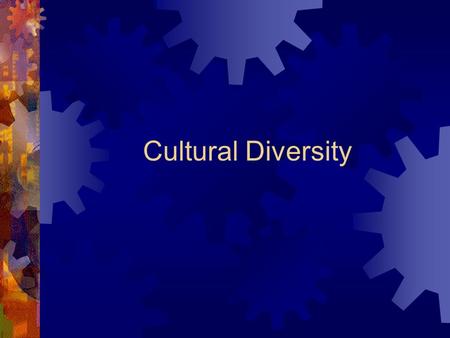 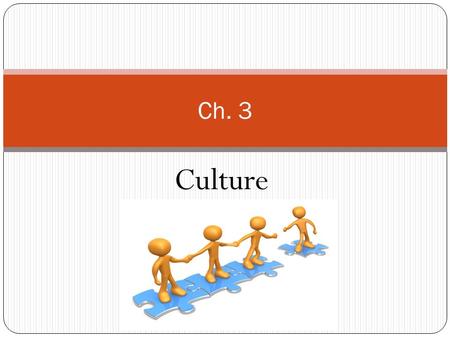 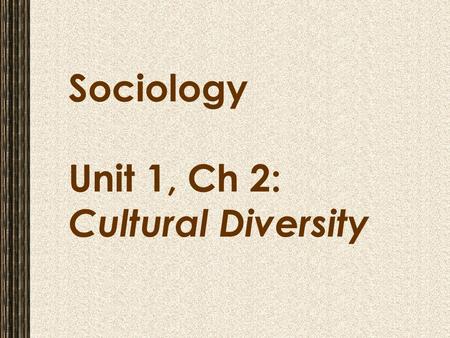 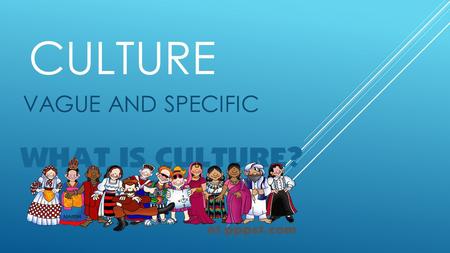