2 W HAT IS IT ? Sociology= studies human society and social behavior in a scientific manner. Look at two main aspects of society: Social interaction = how people relate to one another and influence one another’s behavior. Social phenomena = observable facts or events in human society.

3 W HY DO P EOPLE S TUDY S OCIOLOGY ? 1) Understand how behavior is influenced by social factors. 2) Learn how to view the world through others’ eyes Look beyond common beliefs and find hidden meanings = sociological perspective. 3) Attempt to balance one’s personal desires with their social environment. Connect the larger world with personal life = sociological imagination. 4) Find your ‘place’ both within society and history.

5 S OCIAL S CIENCES What do each of the other social sciences look at? (Be able to explain each in your own words) Anthropology– cultures of past, less-advanced societies. Psychology– focuses on individual behavior. Economics– study of choices people make; how people are affected by economic factors. Political science– organization and operation of government. History– study of past events; how past events affect current behaviors and attitudes.

7 H OW S OCIOLOGY S TARTED Sociology did not develop until the 1800s. Sociology developed in Europe, because of changes as a result of the Industrial Revolution. People left their homes in the countryside and came to cities. As cities became crowded, people began to interact on a closer scale than ever before. Social problems such as housing shortages, crime, and lack of jobs arose. The desire for individual rights amongst society led to the American and French Revolutions.

10 T HE E ARLY S OCIOLOGISTS ( CONT ’ D ) Karl Marx German (1818-1883) Structure of society is influenced by how its economy is organized. There are two classes, the bourgeoisie and the proletariat. The bourgeoisie own the means of production and the proletariat provides labor. The imbalance of power between the two classes would lead to rebellion.

11 T HE E ARLY S OCIOLOGISTS ( CONT ’ D ) Emile Durkheim French (1858-1917) First to apply scientific principles to study of society. Study directly observable features. Saw society as a series of interrelated parts, but the function(s) of these parts was his focus. Function= a consequence that an element of society produces in order to maintain the social system. Specifically looked at religion. 1897 study Suicide was the first of its kind

12 T HE E ARLY S OCIOLOGISTS ( CONT ’ D ) Max Weber Prussian (1864-1920) Focused on the groups within a society rather than society as a whole. What is the effect of society on the individual? Believed in the use of Verstehn to put yourself in someone’s place to study meanings behind an individual’s actions. Created the term ideal type to refer to the essential characteristics of a feature of society.

16 F UNCTIONALISM T ERMS Manifest functions of institutions are open, stated, conscious functions. They involve the intended, recognized, consequences of an aspect of society. Latent functions are unconscious or unintended functions and may reflect hidden purposes of an institution. A dysfunction is an element or a process of society that may actually disrupt a social system or lead to a decrease in stability.

22 R EVIEW : W HICH IS FUNCTIONALISM, CONFLICT PERSPECTIVE, OR SYMBOLIC INTERACTIONISM Societies are in relative balance F Power is the most important element in life C Religion helps hold together a society morally F Symbols are crucial to social life S Many element exist in society to benefit the powerful C Social change is constantly occurring C Conflict is harmful and disruptive to society F 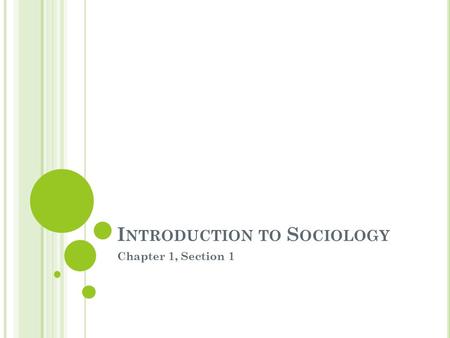