2 THINK ABOUT IT We generally think of plants as growing from seeds, but there are plenty of plants that don’t produce seeds at all. How do they manage to reproduce and grow without them?

3 Green Algae What are the characteristics of green algae?

4 Green Algae What are the characteristics of green algae?
Green algae are mostly aquatic. They are found in fresh and salt water, and in some moist areas on land.

5 Green Algae Algae are not a single group of organisms. “Algae” applies to any photosynthetic eukaryote other than a land plant. “Green algae” are classified with plants.

6 The First Plants Green algae are mostly aquatic. They are found in fresh and salt water, and in some moist areas on land. Ancient green algae shared the ocean floor with corals and sponges..

7 The First Plants Green algae absorb moisture and nutrients directly from their surroundings and do not contain the specialized tissues found in other plants.

8 Life Cycle Many green algae switch back and forth between haploid and diploid phases. However, some may not alternate with each and every generation. In the life cycle of Chlamydomonas, as long as living conditions are suitable, the haploid cell reproduces asexually by mitosis.

9 Life Cycle If conditions become unfavorable, Chlamydomonas can switch to a stage that reproduces sexually. Its cells release gametes that fuse into a diploid zygote (a sporophyte). The zygote has a thick protective wall, permitting survival in harsh conditions.

10 Life Cycle The zygote begins to grow once conditions become favorable.
It divides by meiosis to produce four haploid cells that swim away, mature, and reproduce asexually.

12 Multicellularity Volvox colonies consist of as few as 500 to as many as 50,000 cells arranged to form hollow spheres. Volvox shows some cell specialization and straddles the fence between colonial and multicellular life.

13 Mosses and Other Bryophytes
What factor limits the size of bryophytes?

14 Mosses and Other Bryophytes
What factor limits the size of bryophytes? Bryophytes are small because they lack vascular tissue.

15 Mosses and Other Bryophytes
Mosses have a waxy, protective coating that makes it possible for them to resist drying, and thin filaments known as rhizoids that anchor them to the soil. Rhizoids also absorb water and minerals from the soil.

16 Mosses and Other Bryophytes
Mosses, hornworts, and liverworts all belong to a group of plants known as bryophytes. Bryophytes have specialized reproductive organs enclosed by other, non-reproductive cells. Bryophytes show a higher degree of cell specialization than do the green algae and were among the first plants to become established on land.

17 Why Bryophytes Are Small
Bryophytes do not make lignin, a substance that hardens cell walls, and do not contain true vascular tissue. Because of this, bryophytes cannot support a tall plant body against the pull of gravity.

18 Life Cycle Bryophytes display alternation of generations.
The gametophyte is the dominant, recognizable stage of the life cycle and the stage that carries out most of the photosynthesis. The sporophyte is dependent on the gametophyte for its supply of water and nutrients.

19 Life Cycle Bryophytes produce sperm cells that swim using flagella.
For fertilization to occur, the sperm must swim to an egg. Because of this, bryophytes must live in habitats where open water is available at least part of the year.

23 Sporophyte The zygote marks the beginning of the sporophyte stage of the life cycle.

24 Sporophyte A sporophyte grows within the body of the gametophyte, depending on it for water and nutrients.

25 Sporophyte Eventually the sporophyte grows out of the gametophyte and develops a long stalk ending in a capsule called the sporangium.

26 Haploid spores are produced inside the capsule by meiosis and are released when the capsule ripens and opens.

28 Vascular Plants How is vascular tissue important?
Vascular tissue—xylem and phloem—make it possible for vascular plants to move fluids through their bodies against the force of gravity.

29 Vascular Plants About 420 million years ago, plants for the first time were able to grow high above the ground. Fossil evidence shows these plants were the first to have a transport system with true vascular tissue. Vascular tissue carries water and nutrients much more efficiently than does any tissue found in bryophytes.

30 Evolution of a Transport System
Vascular plants are known as tracheophytes, after a specialized type of water-conducting cell they contain. These cells, called tracheids, are hollow tubelike cells with thick cell walls strengthened by lignin. Tracheids are found in xylem, a tissue that carries water upward from the roots to every part of a plant.

31 Evolution of a Transport System
Tracheids are connected end to end like a series of tin cans, as shown in the figure. Openings between tracheids, known as pits, allow water to move through a plant more efficiently than by diffusion alone.

32 Evolution of a Transport System
Vascular plants also have a second transport tissue called phloem that transports solutions of nutrients and carbohydrates produced by photosynthesis.

33 Seedless Vascular Plants
Among the seedless vascular plants alive today are three phyla commonly known as club mosses, horsetails, and ferns. The most numerous of these are the ferns.

34 Seedless Vascular Plants
Ferns have true vascular tissues, strong roots, creeping or underground stems called rhizomes, and large leaves called fronds, shown in the figure. Ferns can thrive in areas with little light and are most abundant in wet habitats.

36 Life Cycle Sperm and eggs are produced on the gametophytes in antheridia and archegonia. Fertilization requires at least a thin film of water, so that the sperm can swim to the eggs.

37 Life Cycle The diploid zygote produced by fertilization develops into a new sporophyte plant. This is the dominant stage of the fern life cycle. Haploid spores develop on the undersides of the fronds in sporangia, and the cycle begins again 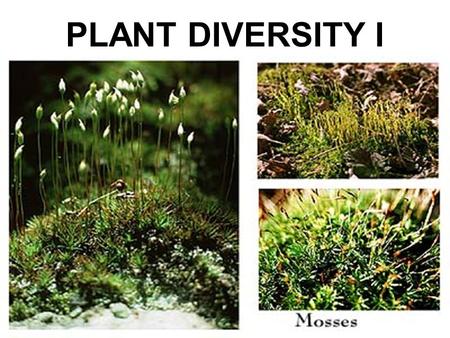 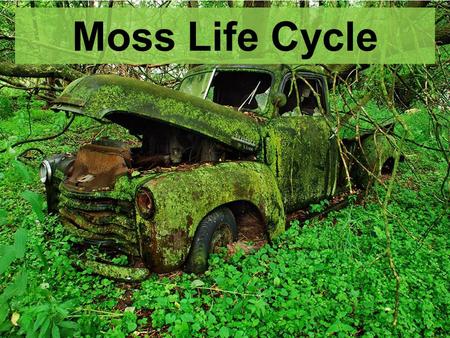 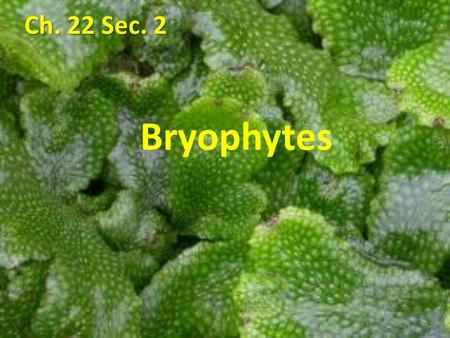 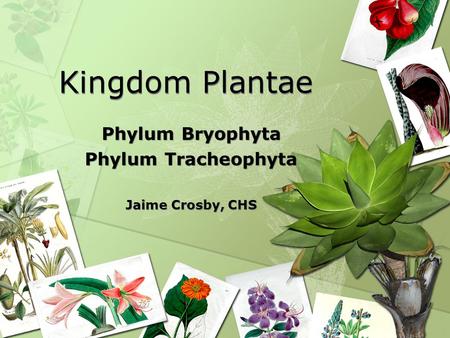 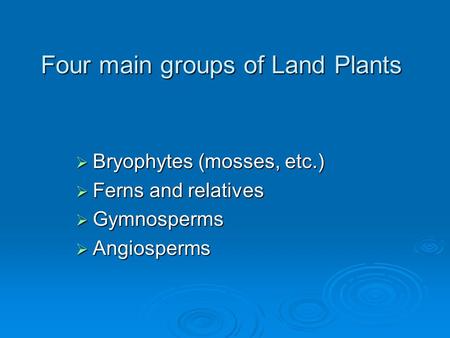 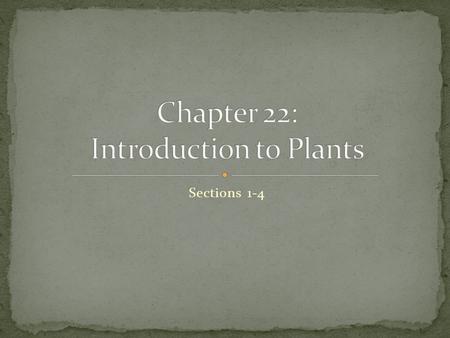 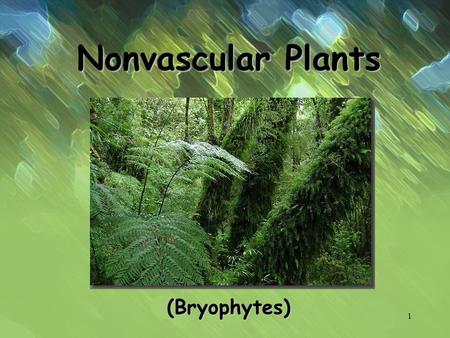 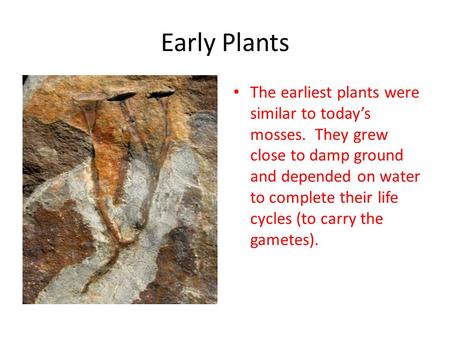 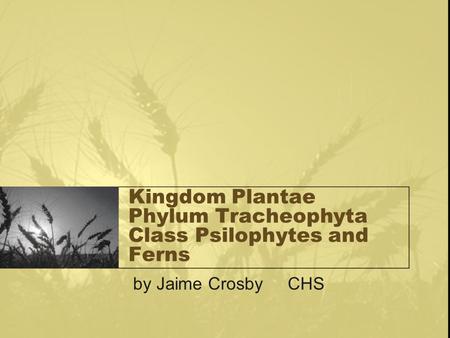