3 Electron Sharing Recall that the noble gases are not very reactive. In contrast, all other nonmetals, including hydrogen, can bond to other nonmetals by sharing electrons. Most nonmetals can even bond with another atom of the same element, as is the case with fluorine in Figure 22. When you count the electrons on each atom, count the shared pair each time. By sharing electrons, each atom has a stable set of eight. The force that holds atoms together in a covalent bond is the attraction of each atom’s nucleus for the shared pair of electrons. The two bonded fluorine atoms form a molecule. A molecule is a neutral group of atoms joined by covalent bonds.

4 Figure 22 Sharing Electrons By sharing electrons in a covalent bond, each fluorine atom has a stable set of eight valence electrons.

5 How Many Bonds? Look at the electron dot diagrams in Figure 23. Count the valence electrons around each atom. Except for hydrogen, the number of covalent bonds that nonmetal atoms can form equals the number of electrons needed to make a total of eight. In the case of hydrogen, only two electrons are needed.

7 For example, oxygen has six valence electrons, so it can form two covalent bonds. In a water molecule, oxygen forms one covalent bond with each of two hydrogen atoms. As a result, the oxygen atom has a stable set of eight valence electrons. Each hydrogen atom can form one bond because it needs only a total of two electrons to be stable. Do you see why water’s formula is H 2 O, instead of H 3 O, H 4 O, or just HO?

10 Low Melting Points and Boiling Points In molecular solids, forces hold the molecules close to one another. But, the forces between molecules are much weaker than the forces between ions in an ionic solid. Compared with ionic solids, less heat must be added to molecular solids to separate the molecules and change the solid to a liquid. That is why most familiar compounds that are liquids or gases at room temperature are molecular compounds.

11 Poor Conductivity Most molecular compounds do not conduct electricity. No charged particles are available to move, so electricity cannot flow. Materials such as plastic and rubber are used to insulate wires because these materials are composed of molecular substances. Even as liquids, molecular compounds are poor conductors. Pure water, for example, does not conduct electricity. Neither does table sugar or alcohol when they are dissolved in pure water.

12 Unequal Sharing of Electrons Have you ever played tug of war? If you have, you know that if both teams pull with equal force, the contest is a tie. But what if the teams pull on the rope with unequal force? Then the rope moves toward the side of the stronger team. The same is true of electrons in a covalent bond. Atoms of some elements pull more strongly on shared electrons than do atoms of other elements. As a result, the electrons are pulled more toward one atom, causing the bonded atoms to have slight electrical charges. These charges are not as strong as the charges on ions.

13 Polar Bonds and Nonpolar Bonds The unequal sharing of electrons is enough to make the atom with the stronger pull slightly negative and the atom with the weaker pull slightly positive. A covalent bond in which electrons are shared unequally is called a polar bond. Of course, if two atoms pull equally on the electrons, neither atom becomes charged. A covalent bond in which electrons are shared equally is a nonpolar bond. Compare the bond in fluorine (F2) with the bond in hydrogen fluoride (HF) in Figure 25.

14 Figure 25Nonpolar and Polar Bonds Fluorine forms a nonpolar bond with another fluorine atom. In hydrogen fluoride, fluorine attracts electrons more strongly than hydrogen does, so the bond formed is polar.

15 Polar Bonds in Molecules It makes sense that a molecule with nonpolar bonds will itself be nonpolar. But a molecule may contain polar bonds and still be nonpolar overall. In carbon dioxide, the oxygen atoms attract electrons much more strongly than carbon does. So, the bonds between the oxygen and carbon atoms are polar. But, as you can see in Figure 26, a carbon dioxide molecule has a shape like a straight line. So, the two oxygen atoms pull with equal strength in opposite directions. In a sense, the attractions cancel out, and the molecule is nonpolar.

20 If you did the Discover activity, you found that adding detergent helped oil and water to mix. This is because one end of a detergent molecule has nonpolar covalent bonds. The other end includes an ionic bond. The detergent’s nonpolar end mixes easily with the oil. Meanwhile, the charged ionic end is attracted to polar water molecules, so the detergent dissolves in water. 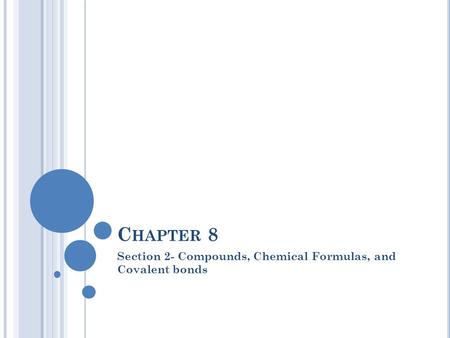 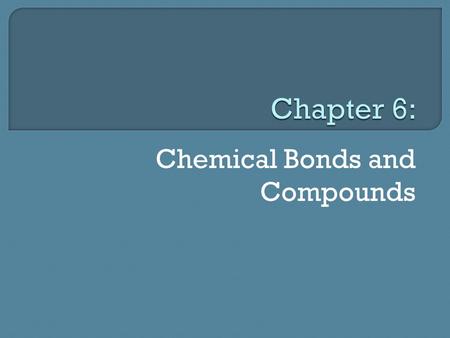