2 a simple element containing text attribute; attributes provide additional information about an element and consist of a name value pair; the value must be enclosed in a single (‘) or double quote (“) Well formed XML (reminder from Lecture 13) Joseph Michael Bloggs Joe Mr 2 Gloucester Road Bristol Avon BS2 4QS 0117 9541054 07710 234674 joe.bloggs@email.com xml declaration (optional) used by xml processor; this documents conforms to xml version 1 and uses the UTF-8 standard (Unicode optimized for ASCII) root element; every well formed xml document must be enclosed by exactly one root element. empty elements a complex element containing other elements and text a comment; comments must be delimited by the characters as in xhtml

4 Vocabularies and Validity - XML documents are not directly written; instead XML is used to create one or more vocabularies, specific custom markup languages (often referred to as XML applications), and it is these languages which are used to create documents. - such a language (a set of namespaces, elements, attributes etc. – a vocabulary) is defined using a set of rules which specify the set (potentially infinite) of complying documents. - such a set of rules is generically referred to as a schema. - for instance, in our example document, we may want to specify rules that state that the element must always contain exactly one each of the,,, & elements and that they must occur in this order. - additional rules we might want to specify are that the & elements must always contain alphanumeric values (not empty) and that they must never exceed 256 characters each.

6 XML schema systems - more formally, an XML schema language is a formalization of the constraints, expressed as rules or a model of structure, that apply to a class of XML documents. - an XML document constrained (described) by a schema is called an instance document and such a document is considered schema-valid. - schemas can serve as design tools, establishing a framework on which implementations can be built. - many schema languages are now available including DTD, W3C Schema, Microsoft XML-Data Reduced (XDR), Schematron, NG Relax, TREX, Examplotron and others. - the most widely used of these is W3C Schema but first we briefly consider the Document Type Definition (DTD) approach which originated in the days of SGML.

7 XML schema systems (0) The Document Type Definition (DTD) approach. - DTD’s are written in a formal notation (BNF) that specifies exactly which elements and entities may appear where in the document and what the elements’ contents and attributes are. - a DTD can make statements of the type such as “a ‘ul’ element can only contain ‘li’ elements” and every ‘student’ element must have a ‘student_number’ attribute” - hence a DTD lists all the elements, attributes and entities the document uses and the context in which it uses them. - a validating parser compares a document to its DTD and lists any places where the document differs from the DTD. - validity operates on the principal that everything not permitted is forbidden. - if an instance document satisfies the DTD it is said to be valid otherwise it is said to be invalid.

9 XML schema languages (2) So what’s the problem with DTD’s? - DTD’s work (to an extent) but there are many issues and limitations with this approach, for example DTD’s do not specify - what the root element of a document is - how many instances of each kind of element appear in a document - what the character data inside the element look like - the semantic meaning of the element; for instance, whether it contains a date or a person’s name. - DTD’s cannot specify anything about the length, structure, meaning, allowed values, or other aspects of the text content of an element. - DTD’s are not in themselves XML documents

10 XML schema languages (3) W3C XML Schema - XML Schemas (http://www.w3.org/XML/Schema) offers a much more powerful way of constraining XML documents than DTD’s.http://www.w3.org/XML/Schema - Advantages of Schemas over DTD’s include: - in additional to the traditional constraints, XML Schemas allow content model constraints for generic data formats to be built. - these defined constraints can be shared (using namespaces) and referenced from other schemas using XLink and XPointer. - it follows an object oriented approach, allowing for the definitions of types and inheritance which allows for better maintainability and can save a significant amount of design time.

11 XML schema languages (4) W3C XML Schema: simple example - consider the following simple document Joseph Bloggs - assuming that the studentName element can only contain a simple string value, the schema for this document would look like - Validatating an instance doc against its schema requires a validating parser such as the Xerces parsar from the Apache XML Project (http://xml.apache.org/xerces-j/)http://xml.apache.org/xerces-j/

13 XML schema systems (6) W3C XML Schema: local versus global declarations -Instance elements declared at the top level of the schema (immediate child of the xs:schema element) are considered global elements. According to the schema specification, any elements declared globally can act as the root element of the instance doc. - elements declared with another element declaration (i.e. within a complex type) are considered local. You can element declarations within a schema that have the same name but different semantics if they are declared locally. - the side effect of using global declarations may include: - naming conflicts when schemas are shared and/or merged - if more than one element is declared globally, a schema valid document may not contain the expected root element 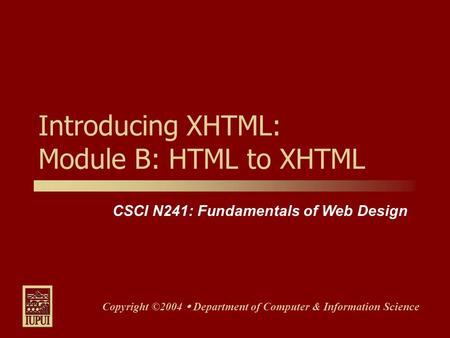 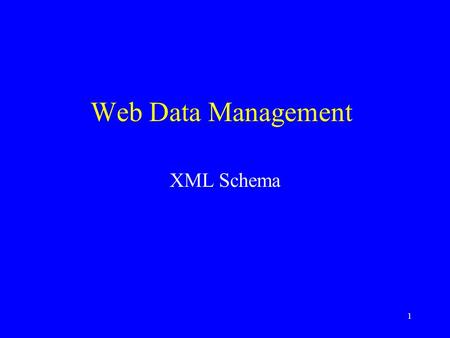 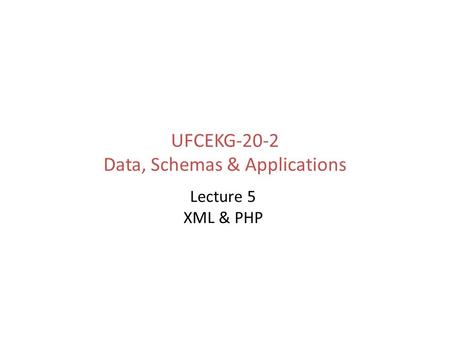 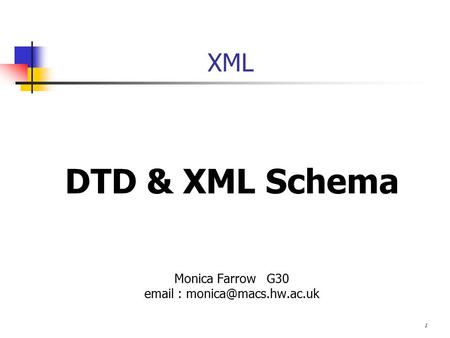 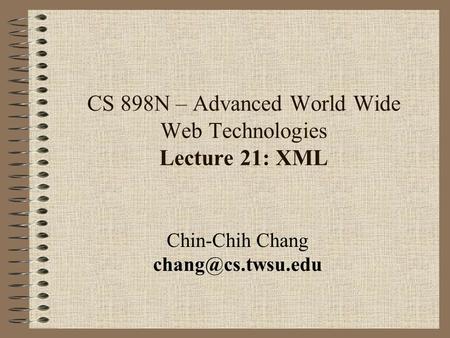 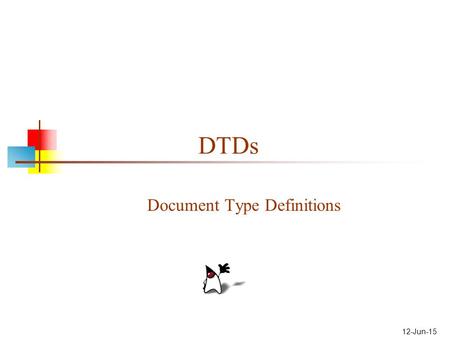 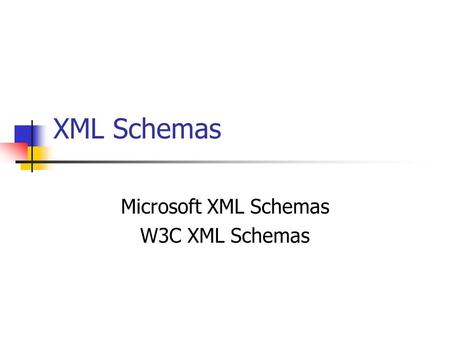 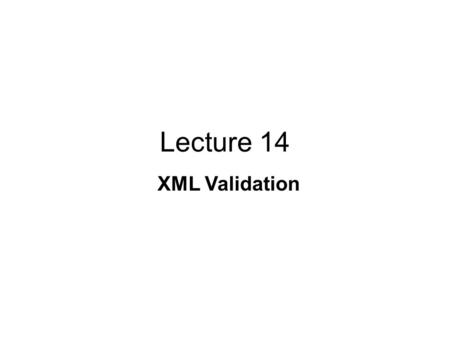 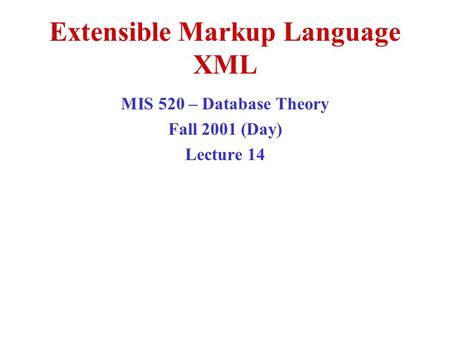 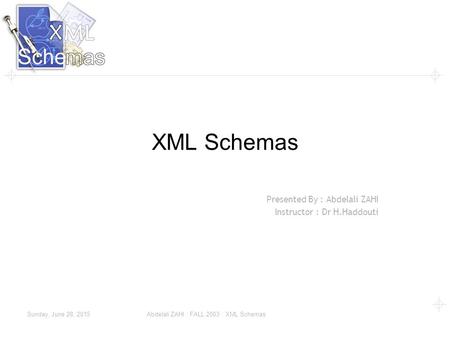 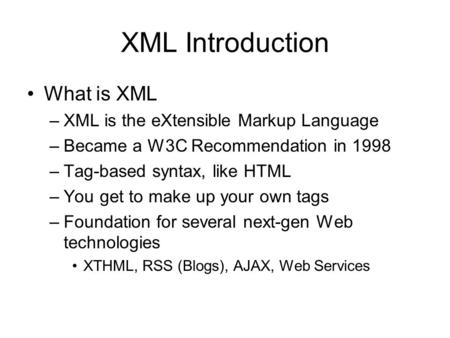 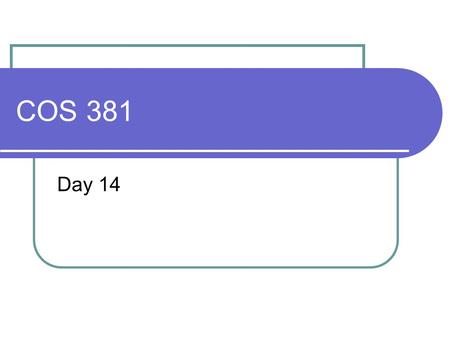 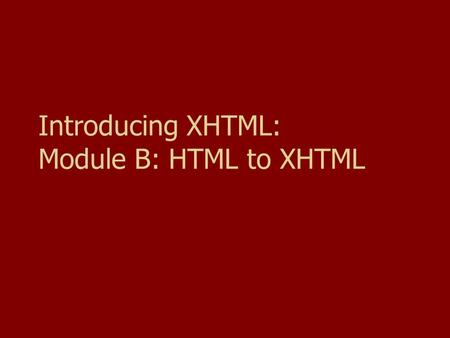 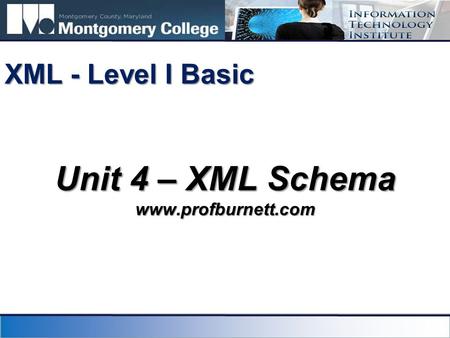 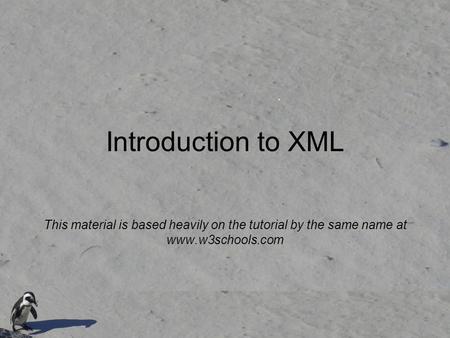 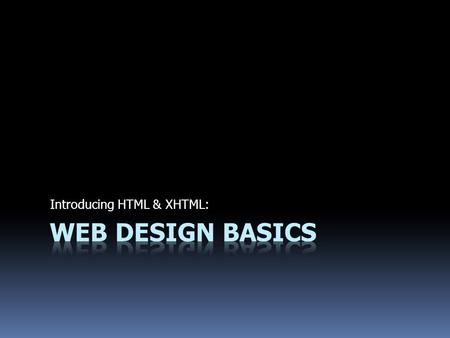 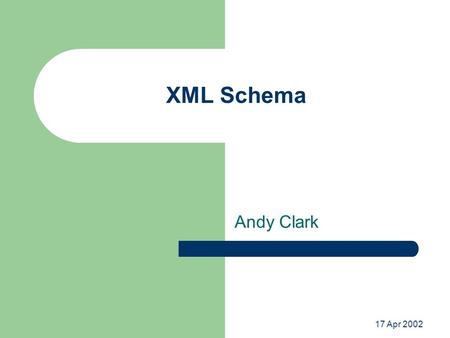 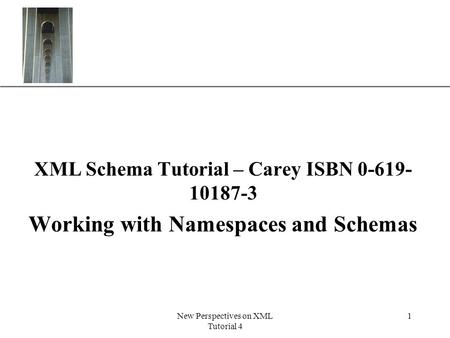 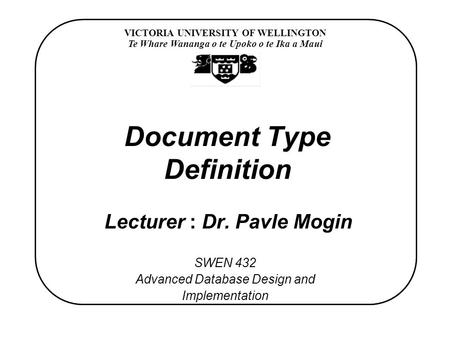 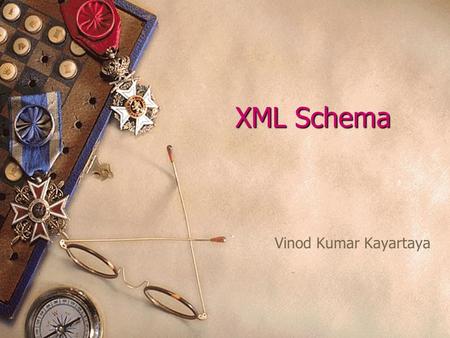 XML Schema Vinod Kumar Kayartaya. What is XML Schema?  XML Schema is an XML based alternative to DTD  An XML schema describes the structure of an XML.