Presentation on theme: " Climate is the condition of the atmosphere over a long period of time."— Presentation transcript:

2  Climate is the condition of the atmosphere over a long period of time.

4 Three characteristics of climate are: A. Temperature B. Precipitation C. Seasons

6 Four factors or elements that affect climate are: A. Latitude B. Wind Currents C. Proximity to Water D. Elevation

7  Temperature is hotter or colder at different latitudes because the earth is tilted on its axis at 23.5° in relation to the sun and it revolves around the sun.  The tilt of the earth causes different amounts of sunlight to hit the earth at different times so we have seasons.

8  The Tropic of Cancer and Capricorn mark the farthest points north and south that receive the direct rays of the sun. This is why the area near the equator is very warm all year.

10  Wind and ocean currents distribute the sun’s heat through convection, the transfer of heat in the atmosphere through upward motion of the air.

11  Areas near the ocean tend to have a milder winter and a cooler summer.  Ocean currents are like rivers in the ocean. Warm water flows away from the equator and cold water flows toward the equator.

12 Some important ocean currents are: A. The North Atlantic Current; this ocean current warms Western Europe. B. The East Australian Current C. The Gulf Stream

14  Elevation influences temperature. As you go up in elevation the temperature becomes colder because the atmosphere is thinner. Areas with very high elevations can have vegetation similar to the arctic.

15 Some areas with high elevations are: A. The Plateau of Tibet in Asia B. Countries in the Andes Mountains such as Bolivia, Chile, and Peru C. Switzerland in the Alps

16  Climate zones are classified by temperature and precipitation.  Biome refers to the climate of an area and the types of animals and vegetation that are found in that area.

19  The types of plants that grow in an area are dependent on three things: temperature, precipitation, and amount of sunlight.

20  Deserts are based on precipitation. There are hot and cold deserts. Some hot deserts are: The Sahara, The Namib, The Atacama, and The Gobi. Antarctica is actually a desert because it gets very little rainfall.

21  Grasslands are classified by temperature and precipitation. Grasslands don’t receive enough rain for trees to grow but they can vary in temperature.

29  Tundra - The Tundra is a flat treeless plain located in the far north on the coast of Alaska, Canada, and Russia. The Tundra has short grasses, a few shrubs, mosses, and some flowers. Underneath the tundra there is permafrost, permanently frozen subsoil.

31  Forests near the equator have more broadleaf trees and the leaves are larger because the area receives more sunlight.  Forests in the high latitudes have more coniferous trees because they grow better with less sunlight.

32 Rainforests are found in tropical wet climate zones in the low latitudes. What countries do you think have rainforests? A. Brazil - Amazon Rainforest B. Congo C. Indonesia D. Most of Central America

37  Middle latitude forests have a mix of coniferous trees and deciduous trees. Deciduous trees are broadleaf trees that lose their leaves in the winter time.

38  A climograph is a graphical representation of temperature and precipitation for a location. By comparing climographs we can understand differences in climate from one location to another.

Download ppt " Climate is the condition of the atmosphere over a long period of time." 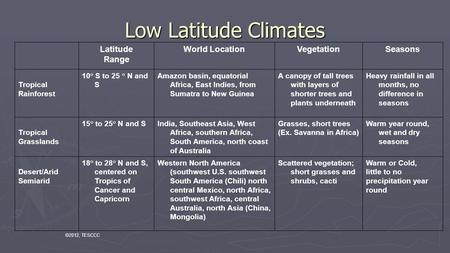