3 January 2002 NYSED New York State Learning Standards Learning standards outline what students should know, understand and be able to do in a specific subject area Learning standards contain content and performance standards –Content Standard The knowledge, skills, and understandings that individuals can habitually demonstrate over time as a consequence of instruction and experience –Performance Standards Levels of student achievement in domains of study

5 January 2002 NYSED State Assessments Provide a uniform measure of student achievement across all districts, all schools, all classrooms State tests assess the extent to which students have achieved the learning standards in a content area Are important indicators of student achievement of the learning standards Are used to understand individual student needs in conjunction with other appropriate measures Drive necessary changes in curriculum and classroom instruction

11 January 2002 NYSED Test Construction New York State teachers and content consultants, in coordination with Office of State Assessment and Curriculum and Instruction, determine test specifications A “test blueprint” determines the percentage of questions weighted for each standard and key ideas

13 January 2002 NYSED Pre-Tests Prospective test items are “pre-tested” by a diverse sample of students across the State Approximately 200 students for each item are tested Results from pre-tested items are statistically analyzed to determine question “item difficulty,” and fairness

14 January 2002 NYSED Field Tests Field test items are developed from pre-test questions and administered in “short forms” to a representative sample of students across the State; (800-1000) Field tests are comparable in difficulty from different test forms based on statistical analysis and student performance

15 January 2002 NYSED Field Tests Each field test form is “equated,” meaning two or more test forms are constructed to cover the same explicit content, conform to the same statistical specifications, and are administered under identical procedures Two or more essentially parallel tests are placed on a common scale -“ equating”

19 January 2002 NYSED Standard Setting…Three Performance Levels Example: Physical Setting /Earth Science Does Not Meet Learning Standards Meets Learning Standards Meets Learning Standards with Distinction – The student demonstrates, on demand, proficiency, in terms of Physical Setting /Earth Science content, concepts, science skills and basic science knowledge in any or most of the science learning standards and key ideas that are addressed for productive citizenship and has sufficient knowledge and skill for the demands of most work places or post secondary academic environments

20 January 2002 NYSED Setting the “cut score” The Board of Regents has determined “65” as passing a NY State Regents Examination and “85” as passing with distinction “Passing” =“Proficient”, the performance needed to achieve learning standards To determine the “passing score” or “65” a formal Standards Setting study is conducted based on the reasoned judgement of subject matter specialists and student performance data

21 January 2002 NYSED Scoring and Scaling Based on statistics from student pre-test and field test data, items are placed on a logarithmic scale according to item difficulty level and student ability The two points “passing/65” and “passing with distinction/85” are then algebraically mapped to scale, 0- 100 (not raw score but scale score

22 January 2002 NYSED Standards Setting Committee Committee members are: -knowledgeable in the learning standards for science -from public and nonpublic schools -are current and former classroom teachers -represent urban, suburban and rural schools -selected members from business and industry Each member makes individual judgements with respect to the item difficulty, scaling and equating of field tests, and professional expertise

23 January 2002 NYSED Standards Setting Process New York State Teachers and content experts use the “book marking” method in conjunction with professional judgement to set a “cut score” In the “bookmarking” procedure, multiple choice and constructed response items are ordered in terms of their item difficulty Test items corresponding to various points on the scale are presented as examples of test items at that difficulty level The purpose of the items is to illustrate the meaning of the difficulty scale at specific points

24 January 2002 NYSED Standard Setting Process Test items used come from an “anchor” form; a test form upon which all cut points are set and all later forms of the test will be equated Committee members apply their professional judgements to these ordered items A “cut-score”, or performance standard, is a specified point on a scale score, “65”, and is set such that scores at or above that point are acted upon differently from scores below that point

25 January 2002 NYSED Science Regents Scoring and Scaling The Conversion Chart provided for each test administration translates raw scores to scale scores (performance standards) and then maps to a 0-100 scale.

26 January 2002 NYSED Science Regents Examinations Scoring Test administration for each test form is “equated” so that the same “scale score”, represents the same level of achievement Test forms vary somewhat in the mix of easier and more difficult items, resulting in the relationship between the raw score and the scale score also varying from each test administration

28 January 2002 NYSED This item’s difficulty level, based on field test data, was the easiest question on the ES June 2001 exam.

29 January 2002 NYSED Test item 9 on the LE June 2001 exam has an item difficulty level at the passing performance level, “meets the standards”, based on field test data and the standards setting process.

30 January 2002 NYSED This item’s difficulty level, based on field test data, is an example of a test item at the designated passing performance level, “meets the standards”.

31 January 2002 NYSED Test item 30 on the LE June 2001 exam has an item difficulty level at the passing performance level, “meets the standards”, based on field test data and the standards setting process.

32 January 2002 NYSED This item’s difficulty level, based on field test data, is another example of a question on the ES June 2001exam that “meets the standards”.

33 January 2002 NYSED This item’s difficulty level, based on field test data, was one of the most difficult questions on the LE June 2001 exam.

34 January 2002 NYSED This item’s difficulty level, based on field test data, was the most difficult question on the ES June 2001 exam.

35 January 2002 NYSED Science Regents Examinations Old “65”/passing was determined by a “Raw Score” A students score was based on a maximum of 100 points. Test item difficulty varied from each test form New “65”/passing is determined by a “scale score” A student score is derived by converting a raw score to a scale score based on student field test data The item difficulty values represent the same level of difficulty from each test administration 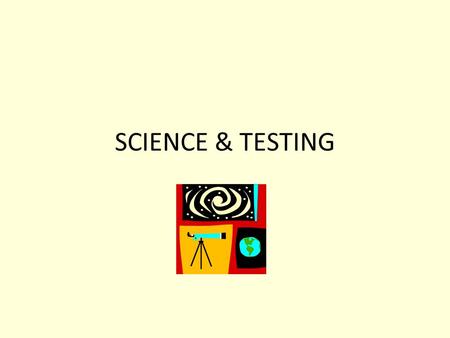 SCIENCE & TESTING. CMT-SCIENCE Given for the first time in Spring 2008 in grades 5 & 8 Consists of multiple choice and open ended questions Based on student. 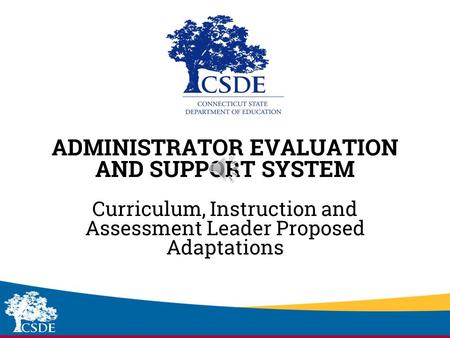 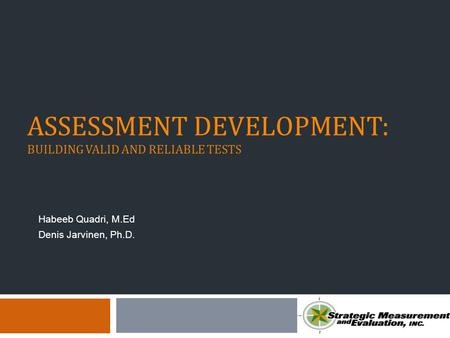 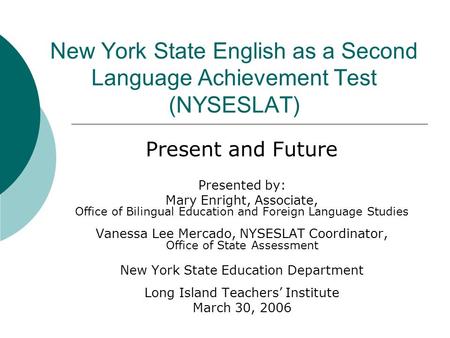 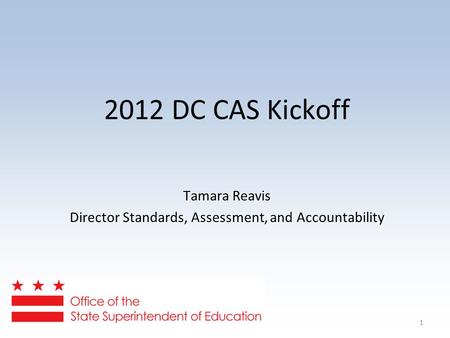 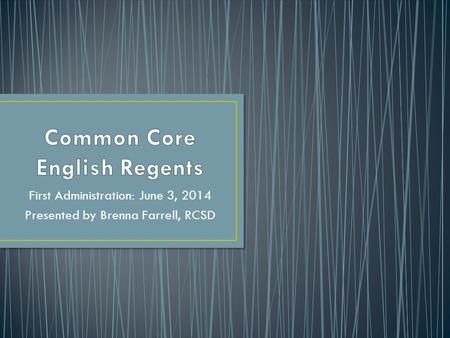 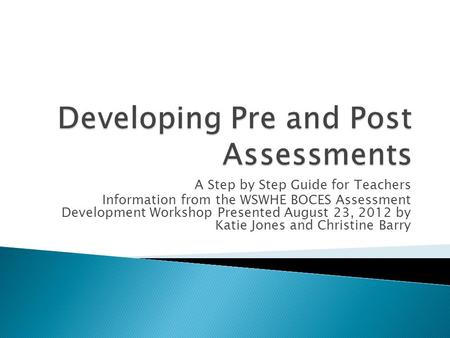 A Step by Step Guide for Teachers Information from the WSWHE BOCES Assessment Development Workshop Presented August 23, 2012 by Katie Jones and Christine. 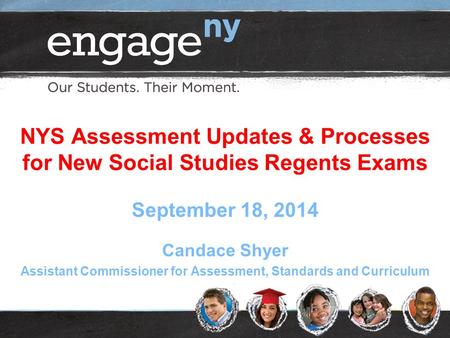 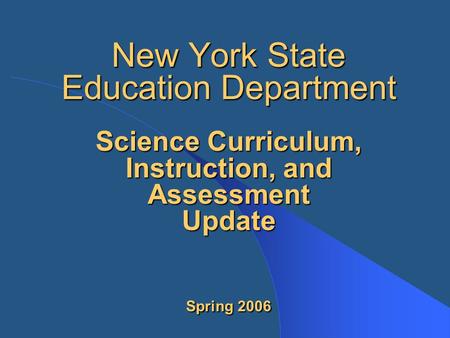 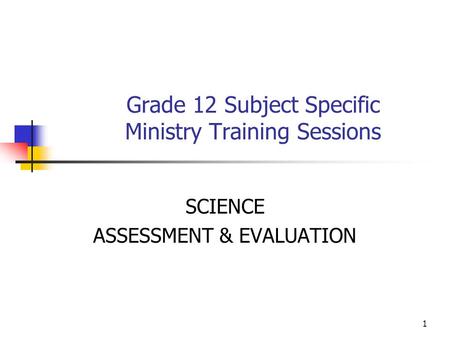 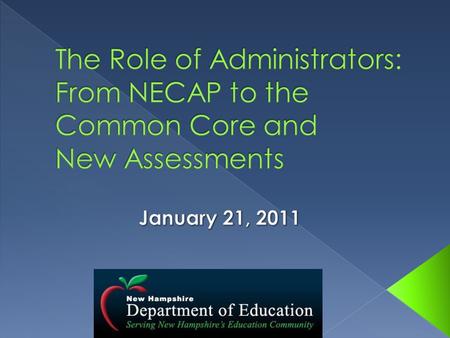  Here’s What... › The State Board of Education has adopted the Common Core State Standards (July 2010)  So what... › Implications and Impact in NH › 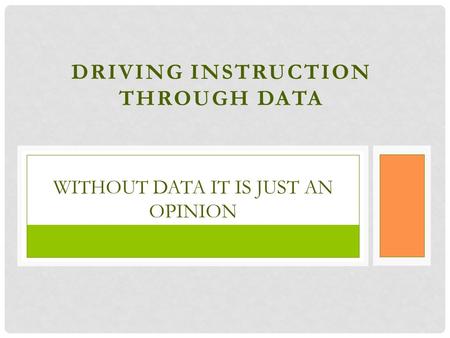 DRIVING INSTRUCTION THROUGH DATA WITHOUT DATA IT IS JUST AN OPINION. 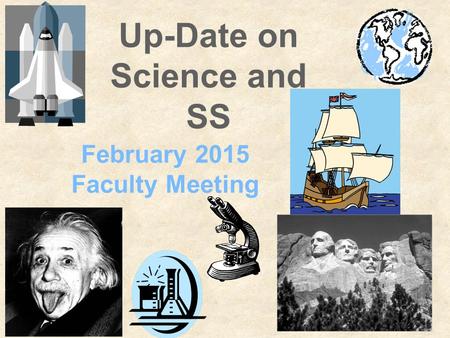 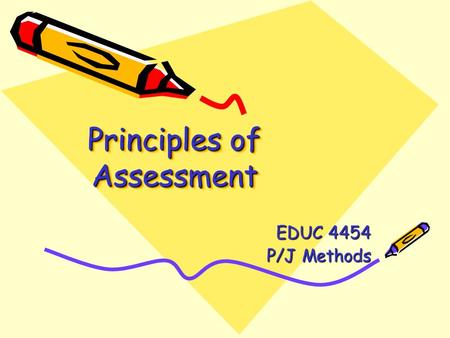 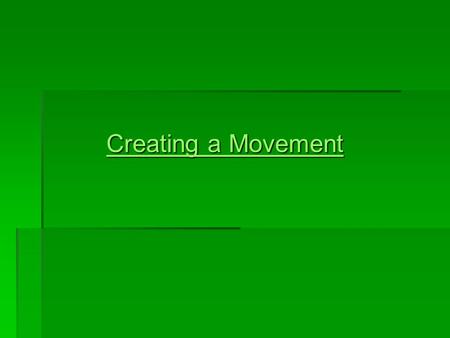 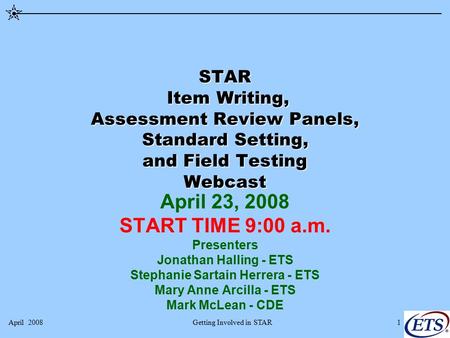 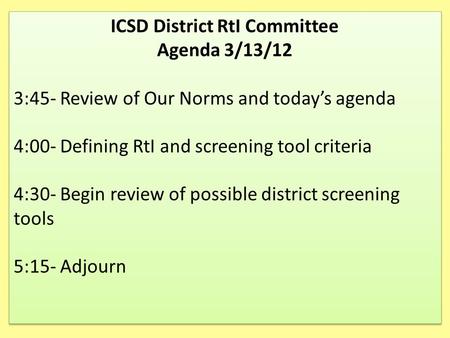 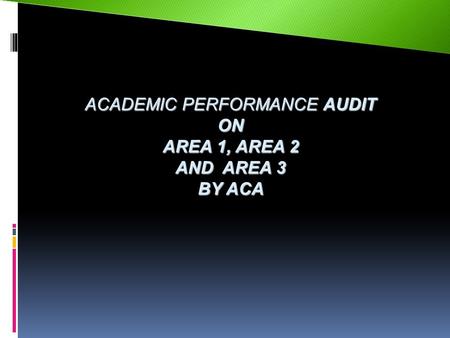 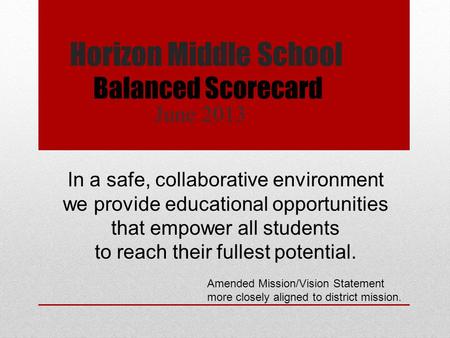 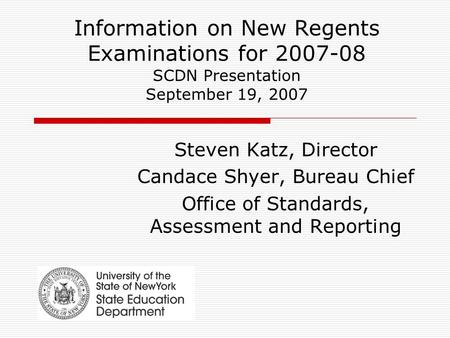