2 What were some of the major problems facing farmers during the Gilded Age ??

4 Farmer’s Organize The Grange The Southern Alliance The Coop

7 The Silver Issue “Crime of ’73”  demonetization of silver (govt. stopped coining silver). Bland-Allison Act (1878)  limited silver coinage to $2-$4 mil. per mo. (based on the 16:1 ratio of silver to gold). Sherman Silver Purchase Act (1890) The US Treasury must purchase $4.5 mil. oz. of silver a month. Govt. deposited most silver in the US Treasury rather than circulation.

16 “You shall not press down upon the brow of labor this crown of thorns, you shall not crucify mankind upon a cross of gold!”

20 The Seasoned Politician
vs. The “Young” Newcomer

21 Into Which Box Will the Voter of ’96 Place His Ballot?

26 Analyze the ways in which technology, government policy, and economic conditions changed American Agriculture in the period In your answer be sure to evaluate farmer’s responses to theses changes. 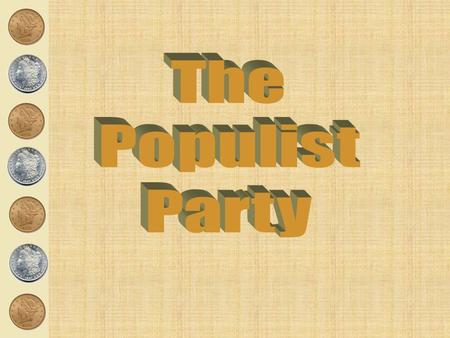