Presentation on theme: "The Phrase A phrase is a group of related words, used as a single part of speech, that never contains a verb and a subject. It does NOT create a sentence."— Presentation transcript:

1 The Phrase A phrase is a group of related words, used as a single part of speech, that never contains a verb and a subject. It does NOT create a sentence.

2 I. Verb Phrase Every word in a verb phrase is a verb. Examples: –A storm is approaching. –Thunder could be heard in the distance.

3 II. The Prepositional Phrase A prepositional phrase (P A N) –begins with a preposition, –it may have adjectives –it ends with a noun or pronoun (obj. of the prep.) Example: in that picture It acts like an adjective OR adverb.

4 Two kinds of prepositional phrases: –1. Adjective phrase - a prepositional phrase used as an adjective. It tells what kind or which one. It follows the noun or pronoun it modifies. Examples: A book of jokes might make a good gift. The girl in the blue shirt won the contest.

5 2.Adverb phrase - a prepositional phrase used as an adverb. It tells when, where, how, why. It modifies a verb, an adjective or another adverb. It comes anywhere in the sentence except after the subject. Examples: Later in the afternoon, the storm brought high winds and rain. We played for hours.

6 III. Verbal phrase A phrase that is centered around a verb form. This verb form is NOT used as a verb in the sentence. It is used as a noun, adj. Or adv.

8 A. Participles/Participial Phrases - Any verb forms used as adjectives - Can be taken out of the sentence - Have several forms Note: A participle is always used as an adjective, therefore it comes close to a noun. They can come BEFORE or AFTER the noun

10 Examples of Participles: The falling snow is beautiful. The bucking bronco… The running stream…

11 Examples of Participles: * The participial phrase usually needs commas. The snow, falling on the trees, is beautiful.

13 Examples of Participles: The boy, having fallen on the snow, slid into the teacher.

14 Caution: If a participle is not close to the noun it modifies, it can become misplaced. The boy slid into the teacher having fallen on the ice. **problem – so far from “boy” – did the boy fall or the teacher ??? Called a misplaced participle.

15 B. Gerund Phrase A gerund is a verbal, or verb form, that ends in -ing and is used as a noun. A gerund always ends in ing and is always used as a noun. Never surrounded by commas except for appositives Be careful of –ING verb forms that ARE used as verbs in a sentence (these are not gerunds) Positions: subject, direct object, predicate nominative, object of the preposition

16 Not all –ING words are Gerunds: Morning Evening Something Nothing Anything Everything She is driving to school today.

20 C. Infinitives/Infinitive Phrases An infinitive is a verbal, or verb form, that can be used as a noun, adjective, or an adverb. An infinitive usually begins with to + a plain verb form ( no endings; no -s, -ing) – Example: to walk, to talk, to go, to see –Don’t confuse with prep. phrase - a prep. phrase has no verb.

21 Infinitives as nouns: To succeed is my goal. (subj.) My ambition is to teach Spanish. (p.n.) She tried to win. (D.O.) Noun will appear in a noun position. Which two are not used????

22 Infinitives as adjectives: The place to meet tomorrow is the library. She is the one to call. Adjective will come directly after a noun and modify it by telling which or what kind.

23 Infinitives as adverbs: To get into Harvard, you must study. Tamara claims she was born to surf. This math problem will be hard to solve without a calculator. Adverb will come first with comma, or answer adv. question, or come after an adjective.

24 Some famous Infinitives: “To be or not to be, that is the question.” “To know me is to love me.” “You’ve got to live a little.” “I vant to drink your blooooooood.” “I wanna hold your hand.” “I’ve only just begun to fight.” “To boldly go where no man has gone before…” (split infinitive)

25 Note: To plus a noun or a pronoun (to Washington, to her) is a prepositional phrase, not an infinitive. –Prep. Phrase: I am going to the mall today. –Infinitive: I am going to shop for new shoes.

28 The Appositive Phrase… Will not begin with a pronoun like “who,” “which,” “that,” etc. + a verb The boy who sits next to me is Bob. –No appositive in the above sentence. May have a pronoun + verb later in the phrase

29 The Appositive Phrase… Will not begin with a verb form. The boy calling out my name is Bob.

Download ppt "The Phrase A phrase is a group of related words, used as a single part of speech, that never contains a verb and a subject. It does NOT create a sentence." 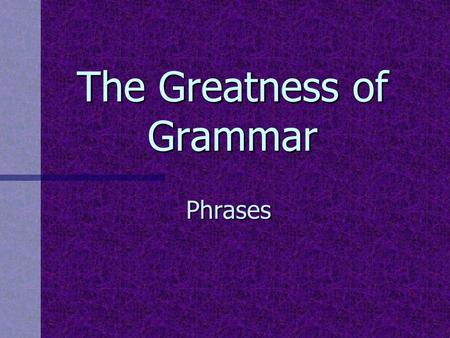 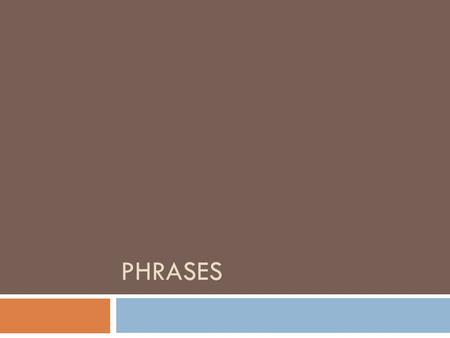 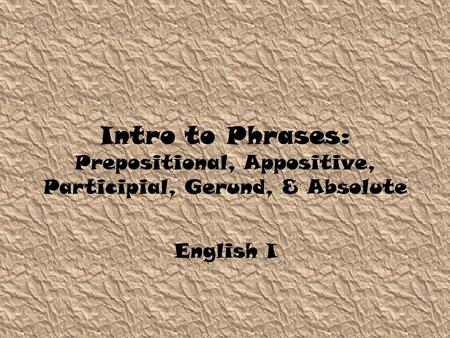 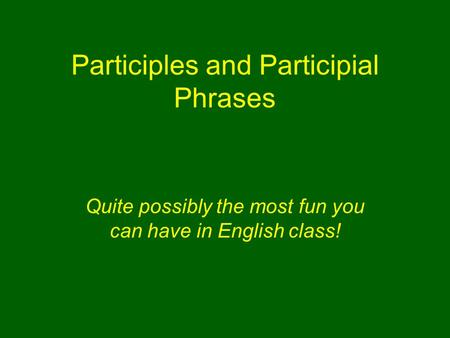 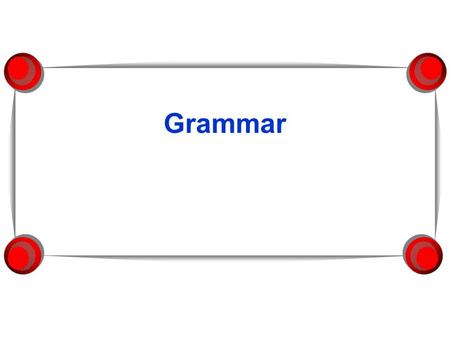 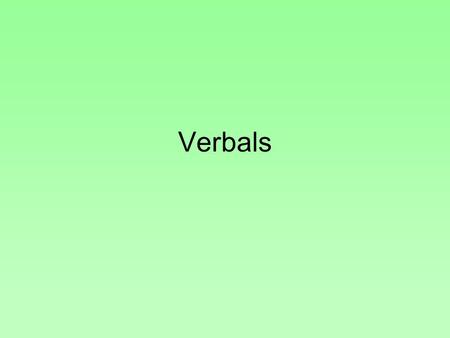