2 INTRODUCTION The Audio-Lingual Method was developed in the United States during World War II. At that time there was a need for people to learn foreign languages rapidly for military purposes. The Grammar-Translation Method did not prepare people to use the target language. While communication in the target language was the goal of the Direct Method, there were at the time exciting new ideas about language and learning.

4 1. The teacher introduces a new dialog
Language forms do not occur by themselves; they occur most naturally within a context.

6 3. The language teacher introduces the dialog by modeling it two times; she introduces the drills by modeling the correct answers; at other times, she corrects mispronunciation by modeling the proper sounds in the target language. One of the language teacher's major roles is that of a model of the target language. Teachers should provide students with a native-speaker-like model. By listening to how it is supposed to sound, students should be able to mimic the model.

7 4. The students repeat each line of the new dialog several times.
Language learning is a process of habit formation. The more often something is repeated, the stronger the habit and the greater the learning.

9 6. The teacher initiates a chain drill in which each student greets another.
The purpose of language learning is to learn how to use the language to communicate.

10 7. The teacher uses single-slot and multiple-slot substitution drills.
Particular parts of speech occupy particular "slots" in sentences. In order to create new sentences, students must learn which part of speech occupies which slot.

12 9. The teacher uses spoken cues and picture cues.
Students should learn to respond to both verbal and nonverbal stimuli.

13 10. The teacher conducts transformation and question-and answer drills.
Each language has a finite number of patterns. Pattern practice helps students to form habits which enable the students to use the patterns.

14 11. The teacher provides the students with cues; she calls on individuals; she smiles encouragement; she holds up pictures one after another. The teacher should be like an orchestra leader-conducting, guiding, and controlling the students' behavior in the target language.

15 12. New vocabulary is introduced through lines of the dialog; vocabulary is limited.
The major objective of language teaching should be for students to acquire the structural patterns; students will learn vocabulary afterward.

16 13. Students are given no grammar rules; grammatical points are taught through examples and drills.
The learning of a foreign language should be the same as the acquisition of the native language. We do not need to memorize rules in order to use our native language. The rules necessary to use the target language will be figured out or induced from examples.

20 3. What are some characteristics of the teaching/learning process?
New vocabulary and structures are presented through dialogs. The dialogs are learned through imitation and repetition. Students' successful responses are positively reinforced. Grammar is induced from the examples given; explicit grammar rules are not provided.

22 5. How are the feelings of the students dealt with?
There are no principles of the method that relate to this area.

23 6. How is language viewed? How is culture viewed?
Everyday speech is emphasized. The level of complexity of the speech is graded, however, so that beginning students are presented with only simple forms. Culture consists of the everyday behavior and lifestyle of the target language speakers.

26 9. How does the teacher respond to student errors?
Student errors are to be avoided if at all possible through the teacher's awareness of where the students will have difficulty and restriction of what they are taught to say.

28 Dialog Memorization Dialogs or short conversations between two people are often used to begin a new lesson. Ss memorize the dialog through mimicry ("mim-mem"); Ss usually take the role of one person in the dialog, and the T the other. After the Ss have learned the one person's lines, they switch roles and memorize the other person's part. Another way of practicing the two roles is for half of the class to take one role and the other half to take the other. After the dialog has been memorized, pairs of individual Ss might perform the dialog for the rest of the class.

29 Backward Build-up (Expansion) Drill
This drill is used when a long line of a dialog is giving Ss trouble. T breaks down the line into several parts. Ss repeat a part of the sentence, usually the last phrase of the line. Then, following the T’s cue, Ss expand what they are repeating part by part until they are able to repeat the entire line. T begins with the part at the end of the sentence and works backward from there. This also directs more student attention to the end of the sentence, where new information typically occurs.

30 Repetition Drill Students are asked to repeat the teacher's model as accurately and as quickly as possible. This drill is often used to teach the lines of the dialog.

31 Chain Drill A chain drill gets its name from the chain of conversation that forms around the room as Ss, one-by-one, ask and answer questions of each other. T begins the chain by greeting a particular S, or asking him a question. That S responds, then turns to the S sitting next to him. The first S greets or asks a question of the second S and the chain continues. A chain drill allows some controlled communication. A chain drill also gives the T an opportunity to check each S’s speech.

32 Single-slot Substitution Drill
T says a line, usually from the dialog. Next, T says a word or a phrase-called the cue. Ss repeat the line T has given them, substituting the cue into the line in its proper place. The major purpose of this drill is to give the Ss practice in finding and filling in the slots of a sentence.

33 Multiple-slot Substitution Drill
This drill is similar to the single-slot substitution drill. The difference is that T gives cue phrases, one at a time, that fit into different slots in the dialog line. Ss must recognize what part of speech each cue is, where it fits into the sentence, and make any other changes, such as subject-verb agreement. They then say the line, fitting the cue phrase into the line where it belongs.

34 Use of Minimal Pairs T works with pairs of words which differ in only one sound; for example, "ship/sheep.” Ss are first asked to perceive the difference between the two words and later to be able to say the two words. T selects the sounds to work on after she has done a contrastive analysis, a comparison between the Ss’ native language and the language they are studying.

35 Complete the Dialog Selected words are erased from a dialog students have learned. Ss complete the dialog by filling in the blanks with the missing words.

36 Grammar Game Games like the supermarket alphabet game described in this chapter are often used in the Audio-Lingual Method. The games are designed to get Ss to practice a grammar point within a context. Ss are able to express themselves although it is rather limited in this game. Notice there is also a lot of repetition in this game. 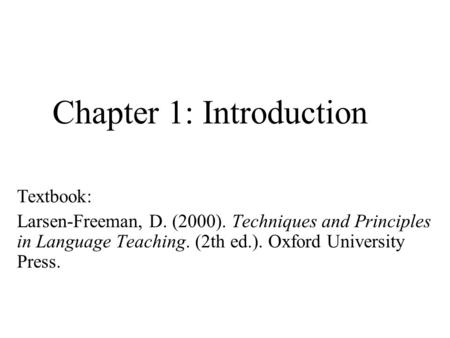 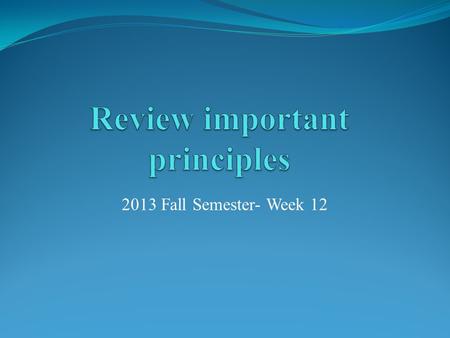 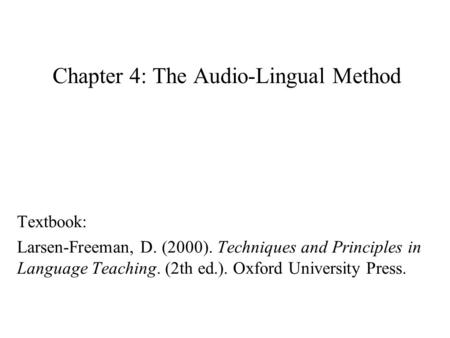 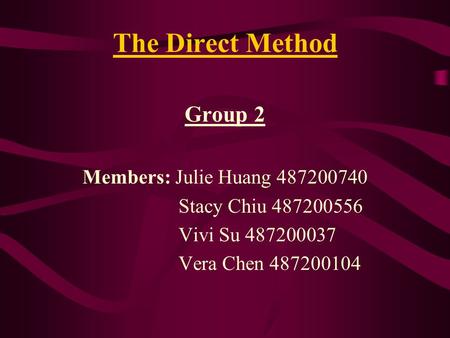 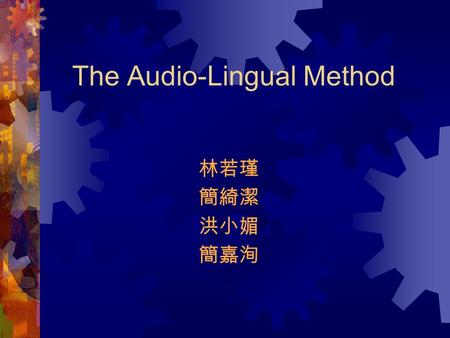 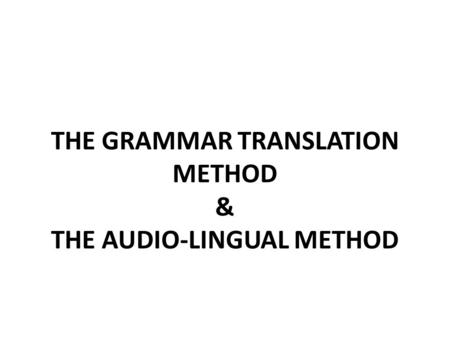 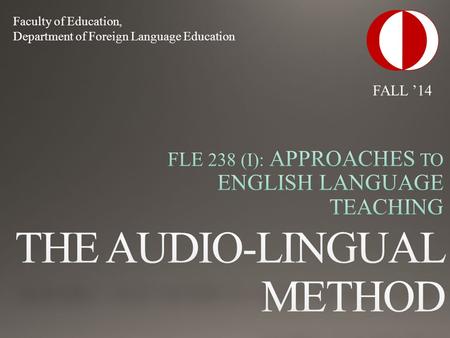 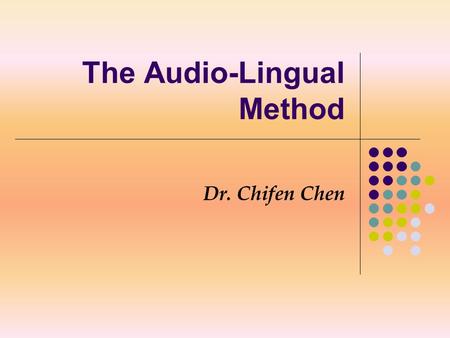 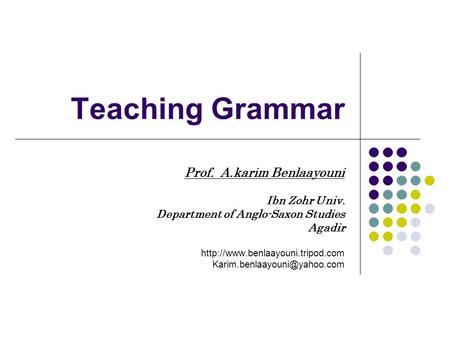 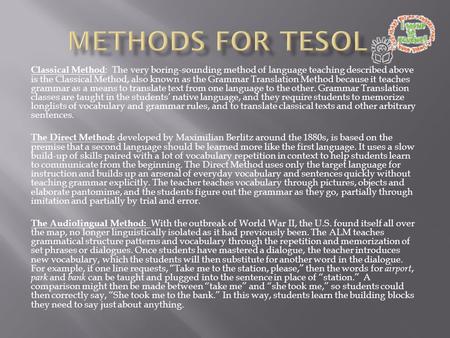 Classical Method : The very boring-sounding method of language teaching described above is the Classical Method, also known as the Grammar Translation. 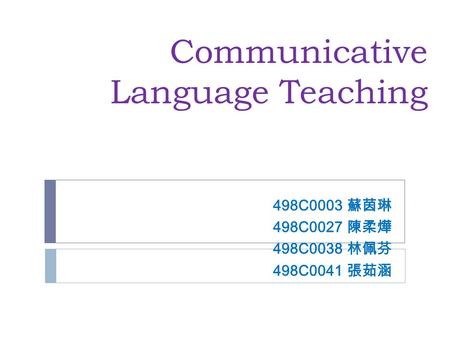 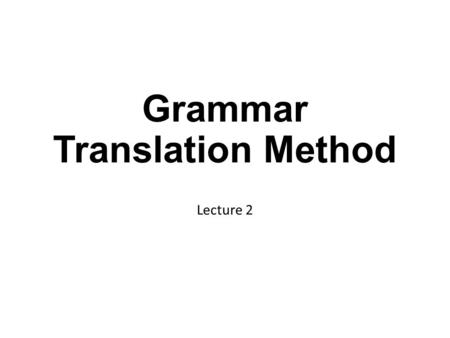 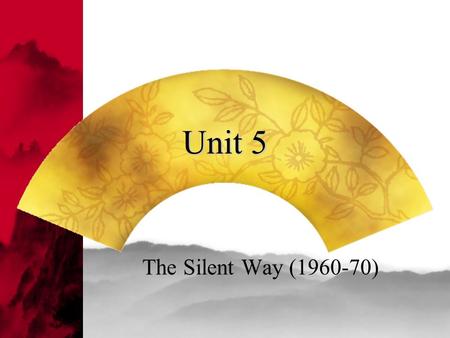 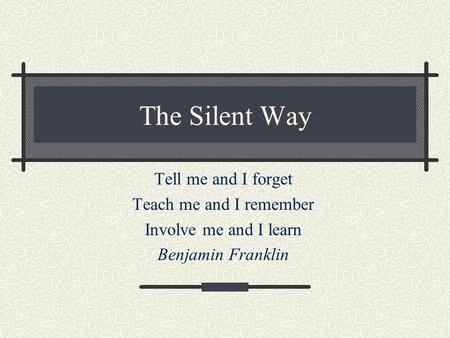 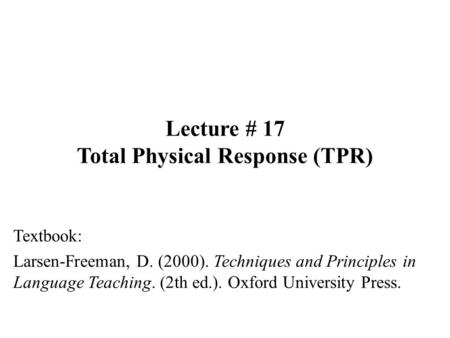 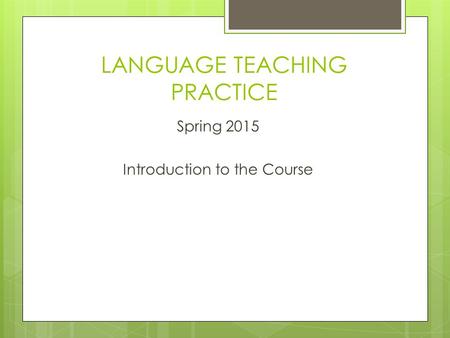