4 Conflict Struggle between two opposing forces 6 main types of conflict
man vs. man man vs. nature man vs. self man vs. society (man vs. technology) (man vs. supernatural) Each type falls into one of two categories: external- conflict between an outside force and the main character internal- one occurs within a character

5 Theme Main ideas in a work of literature
Usually about life or human nature A message, meaning, or moral the author wants you to learn Examples: Loyalty, friendship, overcoming obstacles

6 Point of View First Person 3rd Person
character in story is telling the story I, me, my reader only knows what the narrator is thinking 3rd Person Storyteller is NOT one of the characters He, she, they Reader gets to know the thoughts of many characters

8 Imagery Imagery: The use of detailed descriptions to paint a picture.
Imagery appeals to the five senses. Authors usually use sight imagery, but can be sound, taste, touch, or smell imagery.

10 Setting Time and Place of action of the story
It is important to the events and outcomes of the story. The setting is both large and small in scope

11 Metaphor A comparison without the use of like or as.
e.g., Life is but a dream.

12 Personification When an author gives human qualities to nonhuman things. e.g., The wind cried in the dark.

13 Simile A comparison of two different things or ideas through the use of the words “like” or “as.” e.g., The warrior fought like a lion.

14 Tone Attitude a writer takes towards a subject
Reflects the feelings of a writer Can be sarcastic, humorous, serious,etc.

16 Mood The feeling or atmosphere that the author creates for the reader.
Do not confuse Mood with Tone. The mood is the feeling you are supposed to get when reading the story.

17 Subject The general topic, content, and ideas contained in the text.
Ask: “What topics are addressed?” There is always more than one topic. Sometimes the topics are inferred (not clearly stated).

18 Speaker The speaker is the voice that tells the story. The narrator and the author are usually not the same.

19 Audience The audience is the group of readers to whom the piece is directed. The audience may be one person, a small group or a large group; it may be a certain person or people.

20 Occasion The time and place of the piece; the current situation. It is the context that encouraged the writing to happen. Ask: “Why here? Why now?” Sometimes it is not obvious.

21 Purpose The purpose is the reason behind the text.
For example: to inform, to persuade, to entertain, to gain sympathy, to encourage, to gain support, etc. to + a strong verb

22 Allusion When an author refers to characters or events from history or other pieces of literature e.g., She was beautiful like Venus, the Goddess of love.

23 Symbol Person Place Event or
Object that stands for something beyond itself Example: a bird in a cage would symbolize lost freedom

24 Anaphora Repetition of a word or group of words within a short section of writing. Ex. “A time to be born, and a time to die; a time to plant, and a time to pluck up that which is planted.” – Ecclesiastes 3:2

25 Euphemism Substituting a milder word or phrase for one that might be offensive or harsh. Ex. “passed away” for “died”; “previously owned” for “used.”

26 Pun A play on words which are identical or similar in sound but which have sharply diverse meanings. Puns may have serious or humorous uses. E.g., In Romeo and Juliet as Mercutio is dying, he says, “Ask for me tomorrow and you shall find me a grave man.”

27 Apostrophe A form of personification in which the absent or dead are spoken to as if present Or The inanimate is spoken to as if it is animate (alive). e.g., The answer, my friend, is blowing in the wind.

29 Polysyndeton A style that employs many conjunctions : for, and, nor, but, or, yet, so Ex. "We lived and laughed and loved and left." (James Joyce, Finnegans Wake)

30 Diction (contributes to Tone)
An author's choice of words. Since words have specific meanings, and since one's choice of words can affect feelings, a writer's choice of words can have great impact in a literary work. Ex. Discussing his novel "A Farewell to Arms" during an interview, Ernest Hemingway stated that he had to rewrite the ending thirty-nine times. When asked what the most difficult thing about finishing the novel was, Hemingway answered, "Getting the words right."

31 Inference The act of drawing a conclusion that is not actually stated by the author. Ex. In the Pigman, John and Lorraine are writing a “memorial epic” about Mr. Pignati. Therefore, the reader may logically assume that Mr. Pignati dies in the book.

34 Style (Diction and Syntax)
The way an author chooses and uses words, phrases, and sentences to tell the story. Ex. In an action/adventure story, the author may use simple words and short choppy sentences, because this style moves the story along quickly. In a story about a college professor, the same author may choose to use polysyllabic, unfamiliar words, and long, convoluted sentences. How it looks on the page and how it is read.

35 Syntax The ordering of words into meaningful verbal patterns such as phrases, clauses, and sentences. Poets often manipulate syntax, changing conventional word order, to place certain emphasis on particular words. Emily Dickinson, for instance, writes about being surprised by a snake in her poem "A narrow Fellow in the Grass," and includes this line: "His notice sudden is." In addition to the alliterative hissing s-sounds here, Dickinson also effectively manipulates the line’s syntax so that the verb is appears unexpectedly at the end, making the snake’s hissing presence all the more "sudden." 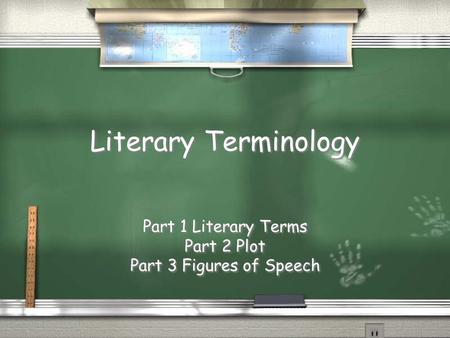 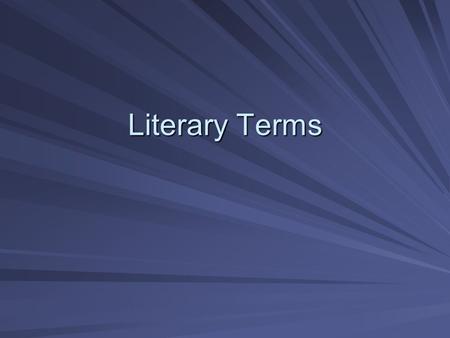