3 The Arabs Arabs: lived in the Arabian Peninsula – The peninsula is a desert land which lacks rivers and lakes Arabs were nomads who had to keep moving to find resources Survival was not easy in this harsh environment – So the Arabs organized into tribes

5 The Arabs Sheikh: the leader of each Arab tribe – Chosen by a council of elders – Tribes were independent but also connected Domestication of the camel allowed the Arabs to expand further into Arabia – Towns developed along trade routes – These routes linked Indian Ocean with Mediterranean

6 The Arabs Allah: name of the Arab supreme god – But they were polytheistic (tribal gods) Allah was symbolized by a sacred stone – Each tribe had its own stone The Black Stone: one massive black meteorite stone which all tribes worshipped Kaaba: shrine in Makkah (Mecca) where the Black Stone was placed

8 The Arabs Disorder in Mesopotamia and Egypt made trade dangerous – So many traders began to move along the routes of Arabia – It was a long, difficult route, but safer – Towns grew because of the trade – Tensions arose as wealthy merchants showed little concern for the welfare of the poorer clans of people and slaves

9 The Life of Muhammad Muhammad: born in Makkah (Mecca) to a merchant family – Orphaned at age 5 – Grew and became a caravan manager – Married a rich widow named Khadija Muhammad became deeply troubled at the greediness of wealthy Makkans and the generosity of most others

11 The Life of Muhammad These revelations were eventually written down into a book known as the Quran – This is the holy book of Islam – Islam means “peace through submission to the will of Allah” – The Quran contains ethical guidelines and laws by which followers of Allah are to abide by Muslims: those who follow the religion of Islam – Muslims have only one God (Allah) and Muhammad is God’s prophet

12 The Life of Muhammad Muhammad returned from the hills to spread his revelations His wife urges him to follow what Gabriel told him – Khadija becomes the first convert to Islam Many in Makkah fear that Muhammad’s ideas will disrupt the social and political order – After 3 years, he only has 30 followers

13 The Life of Muhammad Discouraged and persecuted, in the year 622 (year 1 of the Islamic calendar), Muhammad and his followers leave Makkah and travel north to the city known as Madinah (Medina) Hijrah: Muhammad’s journey to Medina People in and around Medina accept Muhammad’s words

14 The Life of Muhammad Islam means total submission to the will of Allah, so Muslims also submitted to Muhammad His political and military skills allowed him to put together a reliable military force to protect his followers In 630, Muhammad and an army of 10,000 marched to Makkah

15 The Life of Muhammad Makkah surrendered Most converted to Islam Muhammad declared the Kaaba a sacred Islamic shrine Two years later, Muhammad died Hajj: all Muslims are encouraged to make a pilgrimage to Makkah at least once in their lives

17 The Teachings of Muhammad Unlike Christianity, Islam does not believe their first preacher was divine Five Pillars of Islam: the basic tenants of Islam 1.Belief in the One God, Allah, and no other dieties 2.Prescribed prayer 5 times daily 3.Give part of their wealth to the poor through charity 4.Fasting from dawn to sunset during the holy month of Ramadan 5.Try to make a pilgrimage to Makkah at least once

19 The Teachings of Muhammad Shari’ah: a law code developed by Muslim scholars after Muhammad’s death – a set of practical laws to regulate daily life – Based on the Quran and the examples set by Muhammad – Regulates all aspects of Muslim life Including family, business, government, and moral conduct – Does not separate religious matters from civil or political law

20 The Teachings of Muhammad In addition to the Five Pillars, Muslims practice: – Honesty and justice in dealing with others – Muslims are forbidden to: Gamble Eat pork Drink alcohol Engage in dishonest behavior – Family life is based on marriage 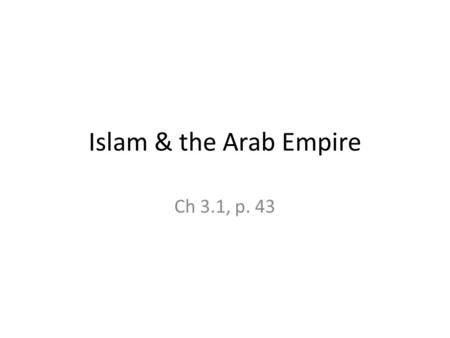 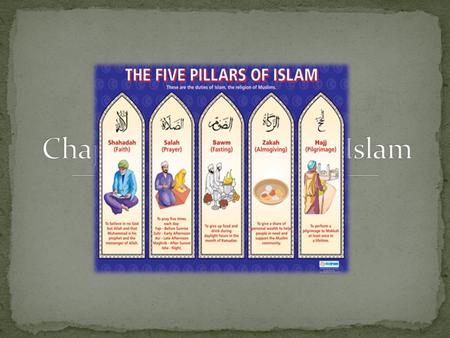 Section 1-The Rise of Islam Click the Speaker button to listen to the audio again. 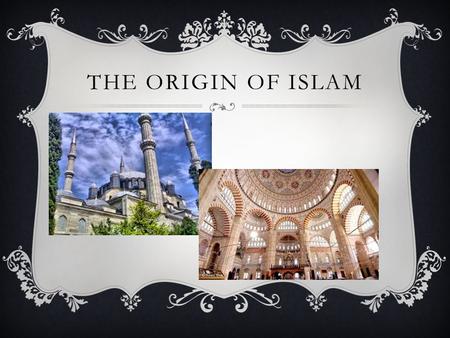 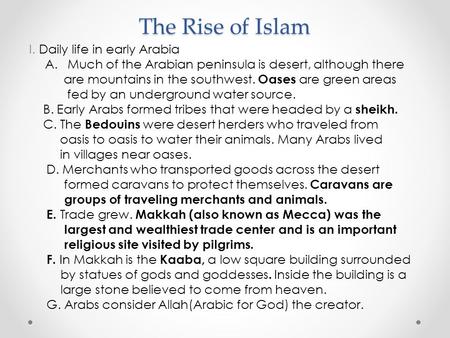 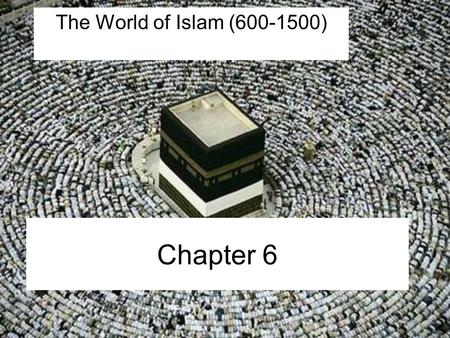 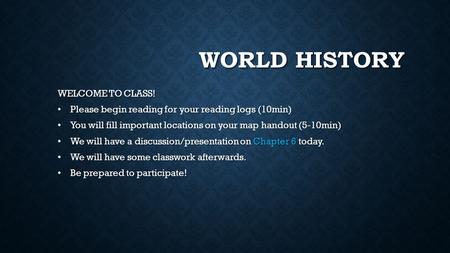 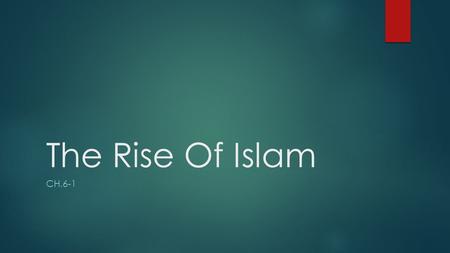 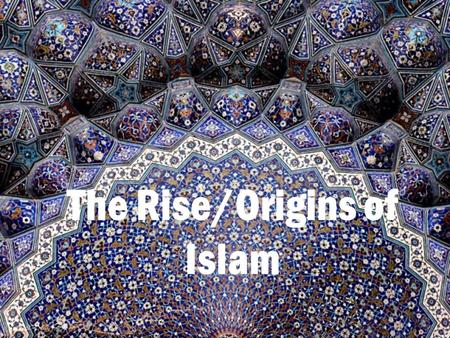 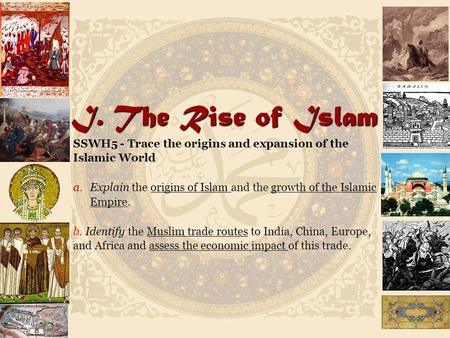 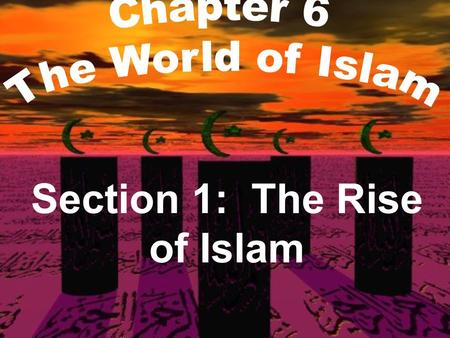 Section 1: The Rise of Islam 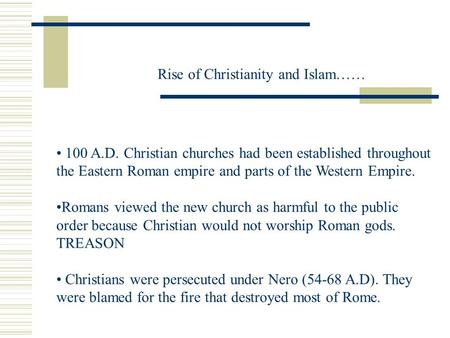 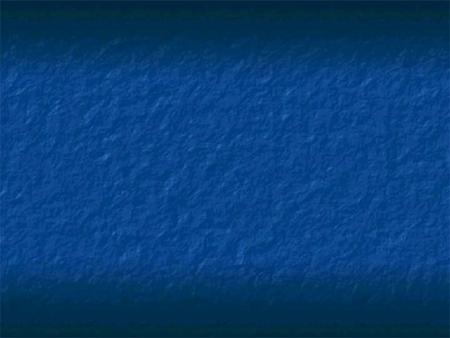 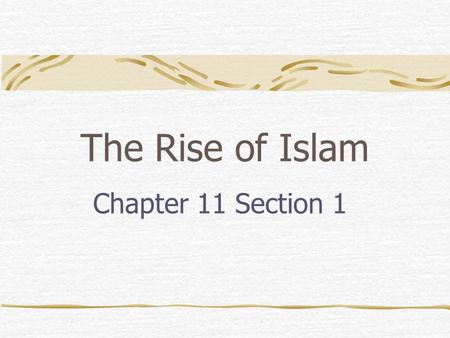