2 EE 3512: Lecture 28, Slide 1 Stability of CT Systems in the s-Plane Recall our stability condition for the Laplace transform of the impulse response of a CT linear time-invariant system: This implies the poles are in the left-half plane. This also implies: A system is said to be marginally stable if its impulse response is bounded: In this case, at least one pole of the system lies on the jω-axis. Recall periodic signals also have poles on the jω-axis because they are marginally stable. Also recall that the left-half plane maps to the inside of the unit circle in the z- plane for discrete-time (sampled) signals. We can show that circuits built from passive components (RLC) are always stable if there is some resistance in the circuit. LHP

5 EE 3512: Lecture 28, Slide 4 Second-Order Transfer Function Recall our expression for a simple, 2 nd -order differential equation: Write this in terms of two parameters, ζ and ω n, related to the poles: From the quadratic equation: There are three types of interesting behavior of this system: Impulse Response Step Response

7 EE 3512: Lecture 28, Slide 6 Step Response For Two Real Poles (Cont.) ζ is referred to as the damping ratio because it controls the time constant of the impulse response (and the time to reach steady state); ω n is the natural frequency and controls the frequency of oscillation (which we will see next for the case of two complex poles). ζ > 1: The system is considered overdamped because it does not achieve oscillation and simply directly approaches its steady-state value. ζ = 1: The system is considered critically damped because it is on the verge of oscillation. Two Real Poles Both Real and Repeated

8 EE 3512: Lecture 28, Slide 7 Step Response For Two Complex Poles When 0 < ζ < 1, we have two complex conjugate poles: The transfer function can be rewritten as: The step response, after some simplification, can be written as: Hence, the response of this system eventually settles to a steady-state value of 1. However, the response can overshoot the steady-state value and will oscillate around it, eventually settling in to its final value.

9 EE 3512: Lecture 28, Slide 8 Analysis of the Step Response For Two Complex Poles ζ > 1: the overdamped system experiences an exponential rise and decay. Its asymptotic behavior is a decaying exponential. ζ = 1: the critically damped system has a fast rise time, and converges to the steady-state value in an exponetial fashion. 0 1: the underdamped system oscillates about the steady-state behavior at a frequency of ω d. Note that you cannot control the rise time and the oscillation behavior independently! What can we conclude about the frequency response of this system? Impulse Response Step Response

10 EE 3512: Lecture 28, Slide 9 Implications in the s-Plane Several important observations: The pole locations are: Since the frequency response is computed along the jω-axis, we can see that the pole is located at ±ω d. The bandwidth of the pole is proportional to the distance from the jω-axis, and is given by ζω n. For a fixed ω n, the range 0 <  < 1 describes a circle. We will make use of this concept in the next chapter when we discuss control systems. What happens if ζ is negative?

11 EE 3512: Lecture 28, Slide 10 RC Circuit Example: Find the response to a sinewave:. Solution: Again we see the solution is the superposition of a transient and steady-state response. The steady-state response could have been found by simply evaluating the Fourier transform at ω 0 and applying the magnitude scaling and phase shift to the input signal. Why? The Fourier transform is given by:

12 EE 3512: Lecture 28, Slide 11 Summary Reviewed stability of CT systems in terms of the location of the poles in the s-plane. Demonstrated that an RLC circuit is unconditionally stable. Analyzed the properties of the impulse response of a first-order differential equation. Analyzed the behavior of stable 2 nd -order systems. Characterized these systems in terms of three possible behaviors: overdamped, critically-damped, or overdamped. Discussed the implications of this in the time and frequency domains. Analyzed the response of an RC circuit to a sinewave. Next: Frequency response, Bode plots and filters.

13 EE 3512: Lecture 28, Slide 12 The Routh-Hurwitz Stability Test The procedures for determining stability do not require finding the roots of the denominator polynomial, which can be a daunting task for a high-order system (e.g., 32 poles). The Routh-Hurwitz stability test is a method of determining stability using simple algebraic operations on the polynomial coefficients. It is best demonstrated through an example. Consider: Construct the Routh array: Number of sign changes in 1 st column = number of poles in the RHPRLC circuit is always stable 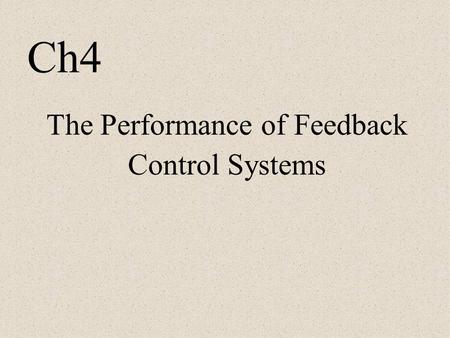 The Performance of Feedback Control Systems 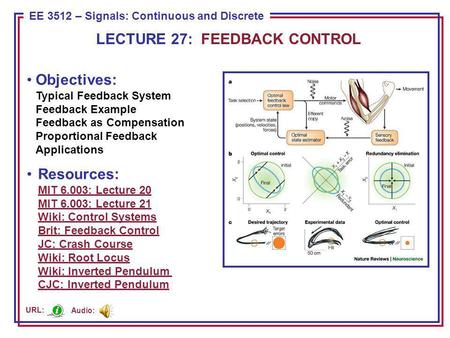 System Function For A Closed-Loop System 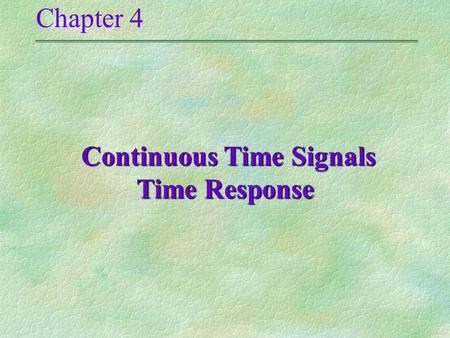 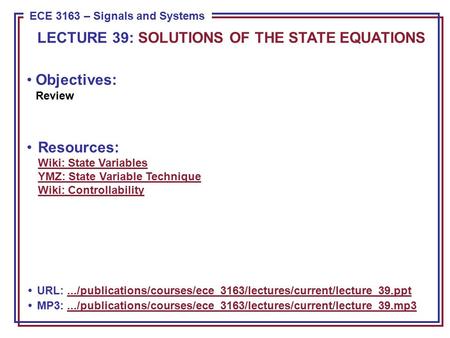 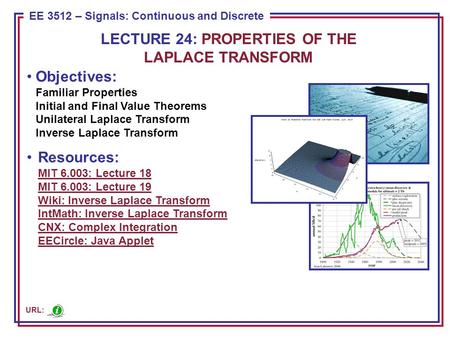 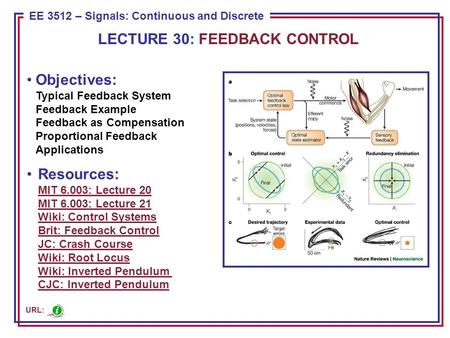 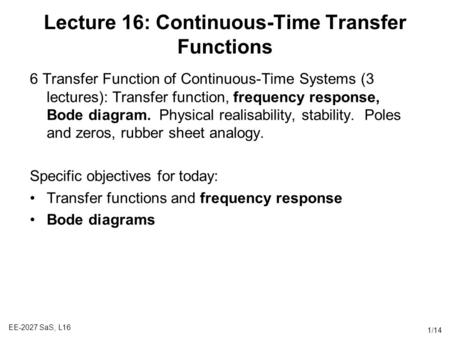 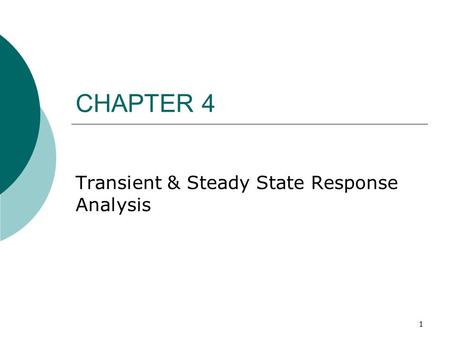 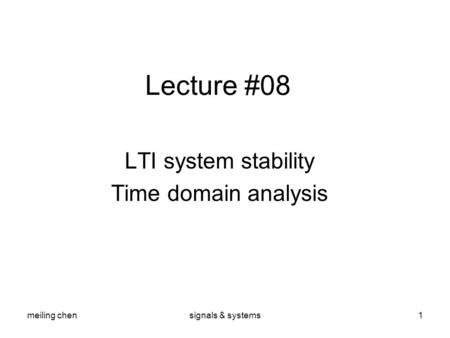 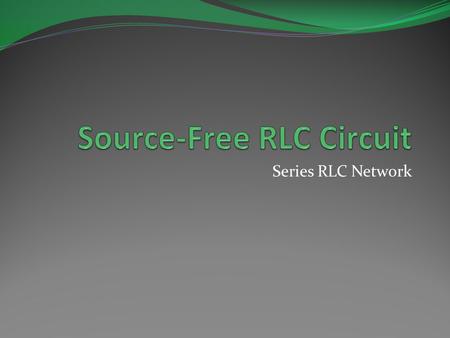 Series RLC Network. Objective of Lecture Derive the equations that relate the voltages across a resistor, an inductor, and a capacitor in series as: the. 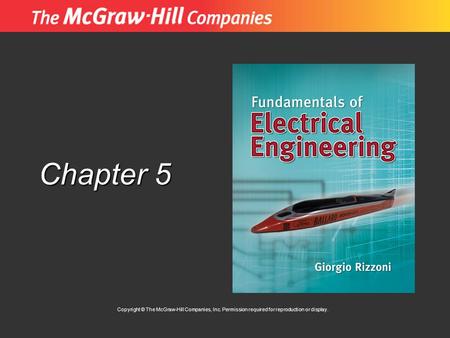 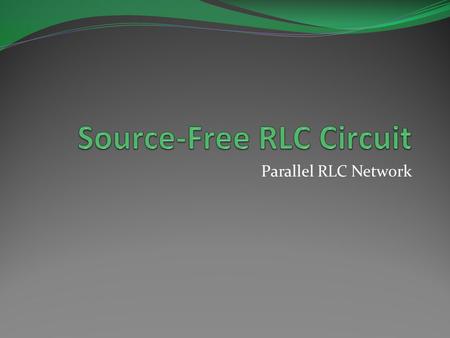 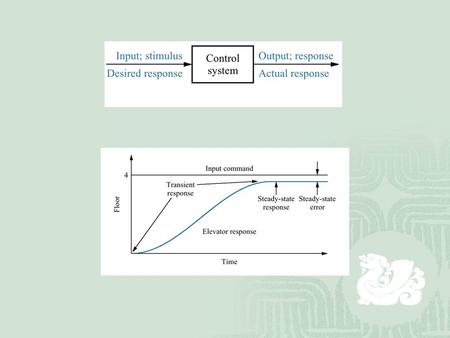 Out response, Poles, and Zeros 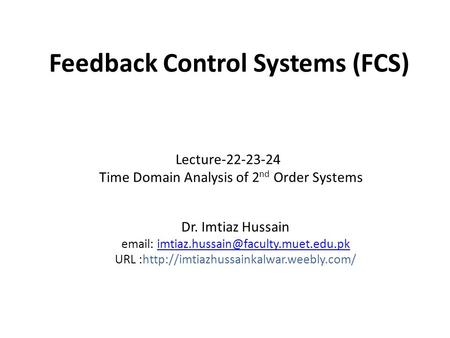 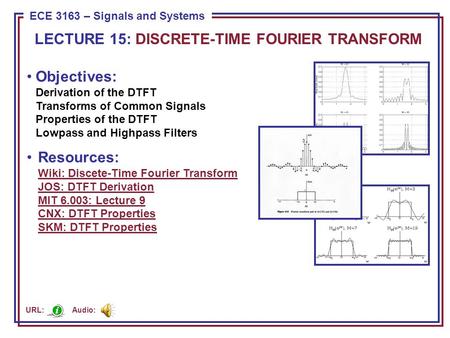 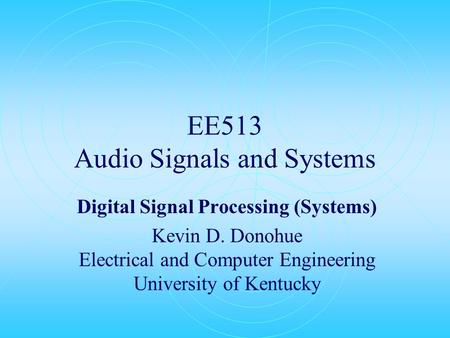 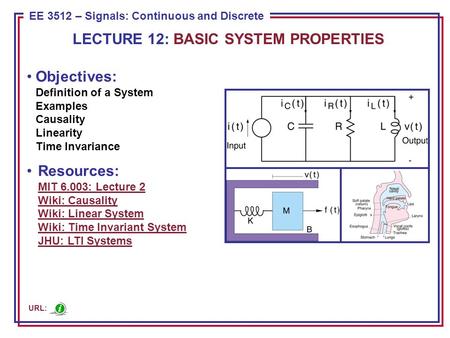 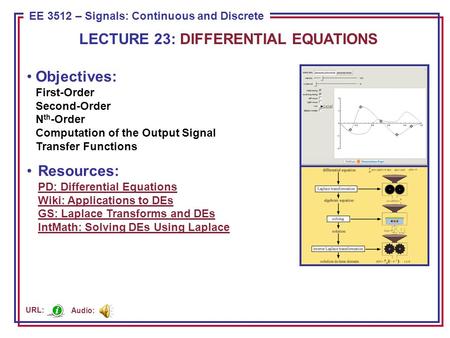 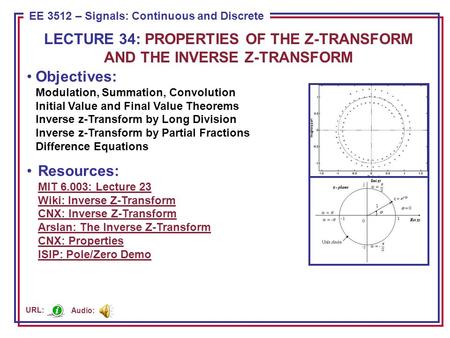 Properties of the z-Transform