Presentation on theme: "Do you know your space facts?. Is the sun a star? Yes."— Presentation transcript:

1 Do you know your space facts?

3 How many moons does Neptune have? eight

4 What planet can you see without a telescope? Venus

5 Which planets have no moons? Venus and Mercury

6 Which planets are called the twin planets? Uranus and Neptune

7 What is the sun made of? Hot gases

8 How many hours in a day on Jupiter? 10 earth hours

9 Which planet is called the “Red Planet?” Mars

10 Which is the biggest planet? Jupiter

11 Which planet has the most moons? Saturn

12 Which planet is almost the same size as earth? Venus

13 Which is the smallest planet? Pluto

14 Which planet is called the morning star? Venus

15 What is the name of our galaxy? Milky Way

17 How is Uranus like Saturn? They both have rings.

19 What do we call a natural satellite? A moon

20 What is the hottest planet? Venus

21 Which planet has the most rings? Saturn

22 Which planet has the Great Red Spot? Jupiter

27 What is the name of Pluto’s moon? Charon

28 What is the largest planet in our solar system? Jupiter

29 What planet is called the blue planet? Neptune

30 The asteroid belt is between what two planets? Mars and Jupiter

31 What do you call a frozen ball of rock, dust and ice that orbits the Sun? Comet

32 What do you call a group of stars in an area of the sky? Constellations

33 What is the name of the closest star to the earth? The sun

34 How long does it take the moon to revolve around the Earth? 1 month

35 How many days does it take the earth to revolve around the sun? 365 days

Download ppt "Do you know your space facts?. Is the sun a star? Yes." 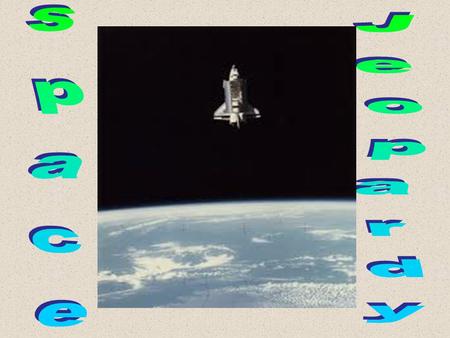