Presentation on theme: "Good Morning! September 3, 2015 Starter: What is an ion? Today we will be exploring the wonderful world of Ions! We will be learning the charges of common."— Presentation transcript:

2 Good Morning! September 3, 2015 Starter: What is an ion? Today we will be exploring the wonderful world of Ions! We will be learning the charges of common ions Their names and what you call them when they bond.

3 Why do atoms become ions? Atoms lose or gain to meet a standard—a stable energy level. An atom that has lost or gained electrons is called an ion. An ion is a charged particle because it now has either more or fewer electrons than protons.

4 Ions and Ionic Bonds You and a friend walk past a market that sells apples for 40 cents each and pears for 50 cents each. You have 45 cents and want an apple. Your friend also has 45 cents but wants a pear.

5 OK now we need learn the names of some of the most common Ions in the world. They come straight off the periodic table.

6 Ions and Ionic Bonds Ions are atoms that have lost or gained electrons.

7 Ions and Ionic Bonds Ions are atoms that have lost or gained electrons.

10 Ions and Ionic Bonds Ionic bonds form as a result of the attractio n between positive and negative ions.

12 Properties of Ionic Compounds In general, ionic compounds are hard, brittle crystals that have high melting points. When dissolved in water or melted, they conduct electricity.

14 Salt Click the Video button to watch a movie about salt.

15 Salt Water Light What is electricity? Electricity: the movement of electrons

16 Salt Water Light What happens when you put salt into water? It dissolves

17 Salt Water Light If Sodium atoms and Chlorine atoms are bonded by the donated electron to make the solid So what happens when they dissolve? They are ions!

19 Salt Water Light So let’s see what happens when you lower the light bulb into the salt water.

20 Salt water light How does the Salt Water allow the electricity to flow? The electrons flow down one Copper Rod and are attracted to the sodium making it neutral, but the Sodium wants to get rid of the electron and it does this on the other Copper Rod. Then the electrons can light the bulb.

21 If two ions bonded which ones would bond? Positive with Negative.

23 A Bond Forms A neutral atom of Aluminum has three electrons in its outer level. This is not a stable outer energy level. When Aluminum forms a compound with Bromine, Aluminum loses three electrons.

24 A Bond Forms The Aluminum atom has become an ion. The aluminum now has a +3 charge. The 3+ charge is shown as a superscript written after the element’s symbol, Al +3, to indicate its charge.

25 A Bond Forms The electrons went to the Bromine atoms causing them to become ions too.

26 A Bond Forms This atom is no longer neutral because it gained an extra negative particle. It now has a charge of 1 − and is called an iodide ion, written as Br −

27 The Bond The positive Aluminum is attracted to the negative Bromide. The thing is that the Aluminum is 3+ and the the Bromide is only 1- So how many Bromide ions do we need? 3

30 A Bond Forms Notice that the resulting compound has a neutral charge because the positive and negative charges of the ions cancel each other.

31 The Ionic Bond An ionic bond is the force of attraction between the opposite charges of the ions in an ionic compound.

32 The Ionic Bond The formation of magnesium chloride, MgCl 2, is another example of ionic bonding. When magnesium reacts with chlorine, a magnesium atom loses two electrons and becomes a positively charged ion, Mg 2+.

35 Zero Net Charge The result of this bond is a neutral compound. The compound as a whole is neutral because the sum of the charges on the ions is zero.

36 Zero Net Charge When atoms form an ionic compound, their electrons are shifted to the other atoms, but the overall number of protons and electrons of the combined atoms remains equal and unchanged. Therefore, the compound is neutral. 20.2 Ionic bonds usually are formed by bonding between metals and nonmetals.

Download ppt "Good Morning! September 3, 2015 Starter: What is an ion? Today we will be exploring the wonderful world of Ions! We will be learning the charges of common." 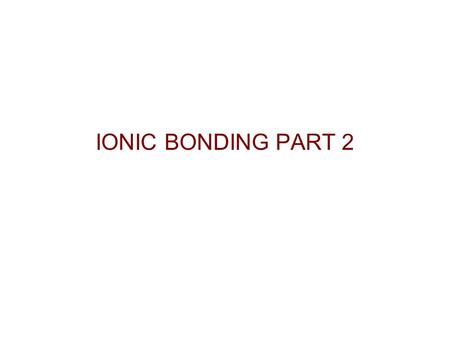 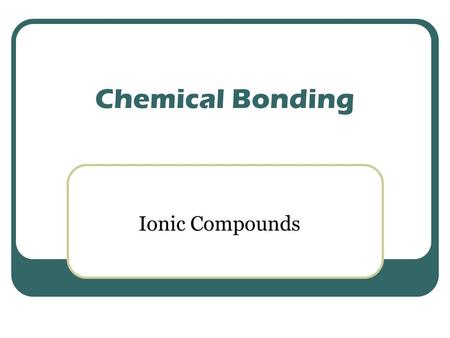