2 Section 1 Objective: What Is Research? Students will be able to describe the process in which psychologists approach a research issue and conduct the research to test a hypothesis, solve a problem, or confirm previous research.

4 Definitions Sample- a small part of anything or one of a number
Naturalistic Observation-research tool in which a subject is observed in their natural habitat Case Study-in-depth investigation of a single individual, group, or event Survey-a method for collecting quantitative information about items in a population Longitudinal Study-study that involves repeated observations of the same items over long periods of time Cross-sectional Study-involve observation of all of a population, or a representative subset, at a defined time Correlation-any of a broad class of statistical relationships between two or more random variable Hypothesis-a proposed explanation for a phenomenon Variable-characteristic of an object Experimental Group-the group the catalyst Is used on Control Group-the group the experiment is used to compare to

8 Positive and Negative Correlation
Graphs used to look at data from a larger spectrum.

10 In a Drug Trial: In order to keep results as accurate as possible, a placebo would be used on the control group. The experimental group would get the initial drug and data would be taken from this group.

12 Experimental Research
The uses of experimental research is used daily to establish relationship, and specifically cause and effect in psychology. See also page 40.

14 Section 2 Objective: - Problems and Solutions in Research Discuss how psychologists must recognize and resolve errors as they conduct research.

16 Things to Know: Self-fulfilling Prophecy-Causing something to happen by believing it will occur Single blind experiment-an experiment in which the person collecting data knows whether the subject is in the control group or the experimental group, but subjects do not Double blind experiment-where the identity of those receiving a test treatment is concealed from both administrators and subjects until after the study is completed Placebo Effect-when a treatment or medication with no known therapeutic value is administered to a patient, and the patient's symptoms improve

17 Self-fulfilling Prophecy
This is a statement that alters actions and therefore comes true. A lot of times these notions are unconscious and lead to accurate actions. Example: One who says “I am going to have a lousy day,” might in fact alter his actions to maintain the unconscious prophecy.

18 Milgram’s experiment In this experiment, Milgram took random participants and used them as catalysts in shocking other individuals. These participants were given orders by a supposed Yale instructor. Also, the individuals being shocked happened to be actors, but would go along with the amount of intensity the participants would give out by command. In the end, Milgram discovered the majority of the experiment’s participants obeyed the commands of an authoritative figure, even if it meant harming others. He compared this to the Holocaust and explained how most people will do exactly what others tell them if it means they get rewarded.

19 What does this tell us? Most people will do as they are told by someone of authority Raised a number of questions about ethical research and treatment in experiments

20 Placebo Effect This is often described as an inactive substance or procedure used as a control in an experiment, in the form if trickery. Mind over Matter is what is usually said to describe the placebo effect.

21 Section 2 Recap ■In a self-fulfilling prophecy, an experimenter has expectations about a participant’s behavior and then acts in some way, usually unknowingly, to influence that behavior. ■ In single-blind experiments, the participants do not know which participants have received the treatment. ■ Researchers can avoid a self-fulfilling prophecy by using the double-blind technique in their experiments. ■ When researchers evaluate the effects of drugs, they must always take into account a possible placebo effect. Main Idea: The investigation of psychological issues is a painstaking process. Psychologists must recognize and resolve errors while doing research.

22 Section 3 Objective STATISTICAL EVALUATION: RECOGNIZE THAT PSYCHOLOGISTS MUST COLLECT AND EVALUATE EVIDENCE TO SUPPORT THEIR HYPOTHESES.

24 More Words to Know Statistics-the science of the collection, organization, and interpretation of data Descriptive Statistics-are used to describe the basic features of the data in a study Frequency Distribution-a tabulation of the values that one or more variables take in a sample Normal Curve-A graph representing the density function of the Normal probability distribution Central Tendency-the way in which quantitative data is clustered around some value Variability-describes how spread out or closely clustered a set of data is. Standard Deviation-shows how much variation there is from average. Correlation Coefficient-a broad class of statistical relationships between two or more random variables or observed data values. Inferential Statistics-systems of procedures that can be used to draw conclusions from datasets arising from systems affected by random variation

25 Questions for discussion
Why must we collect data in our research? What does this do for and to our research? How does the collection of this data effect the research? Should we question data collected? What would happen if hypothesis were approved without this?

26 Section 3 Recap ■Researchers use descriptive statistics to organize data in a practical, efficient way. ■ Descriptive statistics include distributions of data, measures of central tendency, measures of variability, and correlation coefficients. ■ Researchers use inferential statistics to make generalizations about the population from which the participants come. ■ Researchers perform a variety of statistical tests, called measures of statistical significance, to determine whether findings from their experiment support the hypothesis or whether the results are due to chance. Main Idea: Psychologists must collect and evaluate evidence to test their hypotheses. 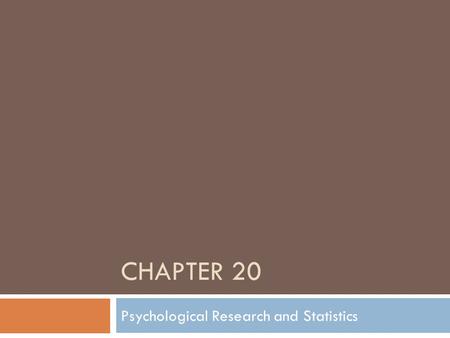 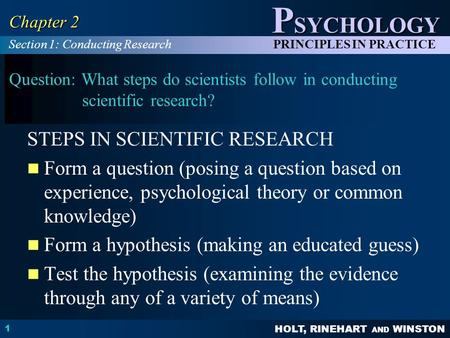 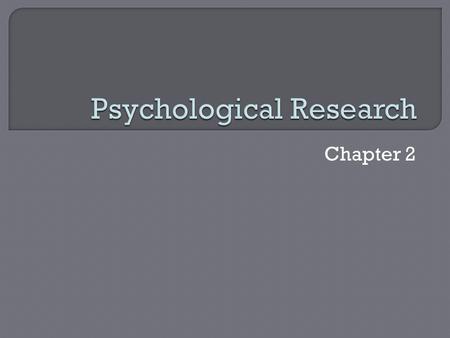