2 Objectives Explain how the Constitution gives Congress the power to tax and places limits on that power. Identify the most significant federal taxes collected today. Describe nontax sources of revenue.

3 Key Terms fiscal policy: the methods used by the government to raise and spend money progressive tax: a tax whose rate increases with one’s income payroll tax: taxes withheld from employee paychecks regressive tax: taxes levied at a fixed rate without regard to the taxpayer’s ability to pay them

4 Key Terms, cont. excise tax: a tax on the manufacture, sale, or consumption of goods and services estate tax: a tax on the assets of someone who dies gift tax: a tax on gifts from one living person to another customs duty: taxes on goods brought to the U.S. from abroad interest: a charge for borrowed money, usually a percentage of the money borrowed

5 Introduction How is the Federal Government financed?
The Federal Government is financed largely by direct and indirect taxes. The major taxes are the individual income tax, corporation income tax, payroll taxes, excise taxes, estate and gift taxes, and customs duties. The government also raises a smaller amount of nontax revenue through interest, fees, and sales. 5

6 The Power to Tax The first power granted to Congress by the Constitution is the power to tax. Congress taxes to raise revenue to operate the federal government. Congress also uses the taxation power to require or deny licenses for certain activities in order to serve the public interest.

7 The Power to Tax, cont. Though taxes are used to fund the programs that the public expects, many complain about the burden placed on taxpayers. How does this cartoon illustrate this view? Political Cartoon Question Answer: The worker in the cartoon is faced with so many different government taxes that he not only receives no money, he owes the government more than he has earned.

8 Direct vs. Indirect Taxes
Checkpoint: How does a direct tax differ from an indirect tax? A direct tax is levied upon a specific individual. Examples include taxes on personal property or income. An indirect tax can be shifted to another person for payment. For example, a tax levied on a liquor producer is passed along to the consumers who buy the liquor in the form of higher prices. Checkpoint Answer: Direct taxes are applied directly to and paid by specific individuals, while indirect taxes may be shifted to other people for payment. 8

10 Limitations on Taxation, cont.
There are exceptions to these limitations: The federal government can tax businesses operated by State and local governments if they are not considered to represent normal government functions. The 16th Amendment, ratified in 1913, allows Congress to levy a direct individual income tax. NOTE TO TEACHERS: A direct individual income tax would have to be levied so that each state would pay a portion of the tax equal to its percentage of the nation’s population, which is both unfair and impossible to enforce given the wide differences in personal wealth and population between states.

11 Income Tax Income tax on individuals and corporations is the largest source of federal revenue. Income taxes are progressive—higher earnings are taxed at a higher rate. Insert the third column graphic showing differing tax rates from the Progressive Taxes feature on page 461 here in the right column, without the caption. Add Click to Enlarge feature. Add “Audio Tour” button

14 Corporation Income Tax
Each corporation must pay income tax. There are many deductions allowed. For example, churches and nonprofit or charitable organizations pay no corporate income tax.

15 Payroll Taxes The federal government collects payroll taxes to finance Social Security, Medicare, and the unemployment compensation program. These are regressive taxes, paid at a fixed rate regardless of income.

16 Excise Taxes Excise taxes are often figured into the retail price of goods and services. Excise taxes on tobacco, alcohol, and gambling are called sin taxes, while those on luxury goods are called luxury taxes.

18 Customs Duties Customs duties, also called tariffs or import duties, are charged on many goods imported into the United States. They were once the main source of federal income, but are now minor.

19 Nontax Revenues Checkpoint: What are three examples of federal nontax revenues? The government receives interest on money borrowed from the Federal Reserve System and other loans. The government also charges fees for issuing passports, copyrights, patents, and trademarks. The sale or lease of public lands also generates government income. NOTE TO TEACHERS: The US Mint earns a profit on the creation of coins, while the US Postal Service sells millions of dollars of mint-condition stamps to collectors each year. Checkpoint Answer: The government receives interest on loans, charges fees for passports, copyrights, patents, and trademarks, and sells or leases public lands. 19

20 Review Now that you have learned about how the Federal Government is financed, go back and answer the Chapter Essential Question. How should the federal budget reflect Americans’ priorities? 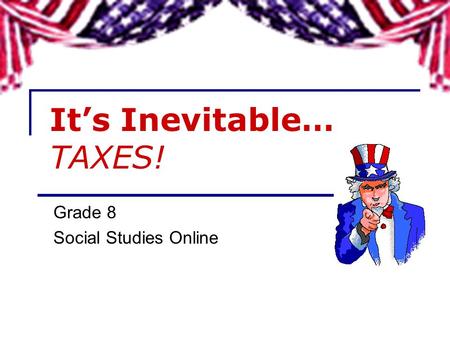 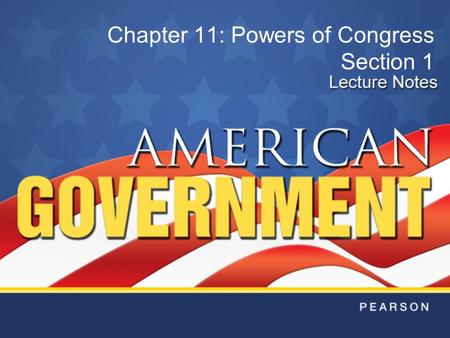 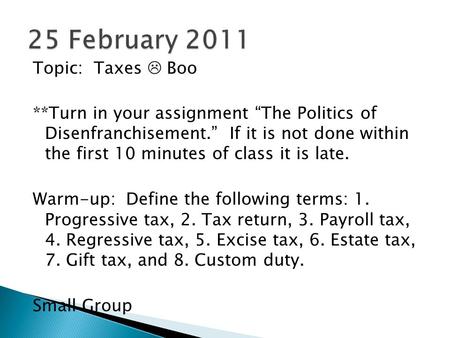 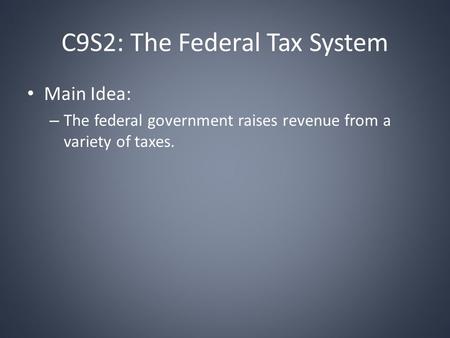 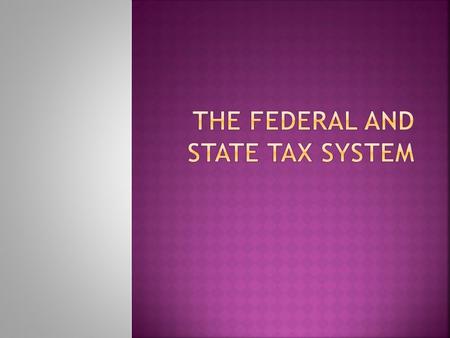