2 System Software System software consists of the programs that control or maintain the operations of the computer and its devices. It serves as the interface between the user, the application software, and the computer’s hardware. Two types: the operating system, and utility programs.

3 Operating Systems An Operating system (OS) is a set of programs containing instructions that work together to coordinate all the activities among computer hardware resources. Activities such as: starting and shutting down a computer, providing a user interface, managing programs, managing memory, coordinating tasks, configuring devices, establishing an Internet connection, monitoring performance, file management, and self-updating.

5 Operating Systems They can be run from optical discs and flash memory, but are mainly installed on the computer’s hard disk. On mobile devices, the OS is usually stored on a ROM chip.

7 Operating Systems The operating system that a computer uses is sometimes called the platform. When you purchase or download software, the system requirements will identify the required platform to run the software. A cross-platform program is one that runs the same on multiple operating systems.

8 Operating System Functions
Despite the size of the computer, most operating systems provide common functions automatically, without requiring any instruction from a user.

9 Starting and Shutting Down a Computer
The process of starting or restarting a computer is called booting. A cold boot is turning on a computer that has been powered off completely. A warm boot is the process of using the operating system to restart a computer. Warm booting will properly shut down any programs properly, but it will NOT save your work.

10 Starting and Shutting Down a Computer
In Windows, a warm boot is performed by clicking the Start button on the taskbar, clicking the lock button arrow, and clicking Restart.

11 Starting and Shutting Down a Computer
The kernel is the core of an operating system that manages memory and devices, maintains the computer’s clock, starts programs, and assigns the computer’s resources. It is memory resident, which means it remains in memory while the computer is running.

12 Starting and Shutting Down a Computer
The BIOS (basic input/output system) is firmware that contains the computer’s startup instructions. It executes a series of tests called power-on self test (POST) to check the various system components, such as buses, system clock, adapter cards, and RAM chips. After a successful POST, BIOS searches for specific operating system files called system files.

13 Starting and Shutting Down a Computer

14 Boot Disk A boot drive is the drive from which your personal computer boots (starts). In most cases, it is the C drive. A boot disk or recovery disk contains a few system files that will start the computer if the boot drive is damaged. When you purchase a computer, a boot disk is usually included in the form of an optical disc.

16 Providing a User Interface
A user interface controls how you enter data and instructions and how information is displayed on the screen. Two types are graphical and command- line.

17 Graphical User Interface
With a graphical user interface (GUI), you interact with menus and visual images such as buttons and other graphical objects to issue commands. Windows, for example, offers a GUI.

19 Command-Line Interface
In a command-line interface, a user types commands or presses special keys on the keyboard to enter data and instructions. They give users more control to manage detailed settings, but can be difficult to use because they require exact spelling, grammar, and, punctuation.

21 Managing Programs A single user/multitasking OS allows a single user to work on two or more programs that reside in memory at the same time. The one in the foreground is the active program that is currently in use. The other programs are running but are in the background.

23 Managing Programs With preemptive multitasking, the OS interrupts a program that is executing and passes control to another program waiting to be executed. A multiuser OS enables two or more users to run programs simultaneously. (servers and mainframes) A multiprocessing OS supports two or more processors running programs at the same time.

24 Managing Memory The purpose of memory management is to optimize the use of RAM. The OS allocates, or assigns, data and instructions to an area of memory while they are being processed. It carefully monitors the contents of memory. It releases the items from being monitored in memory when the processor no longer requires them.

25 Managing Memory With virtual memory the operating system allocates a portion of a storage medium, usually the hard disk, to function as additional RAM. As you interact with a program, part will reside in physical RAM while the rest of the program is on the hard disk. It is slower than RAM, so users may notice a speed difference when virtual memory is used.

26 Managing Memory The area of the hard disk used for virtual memory is called a swap file because it swaps data between memory and storage. A page is the amount of data that can swap at a given time. The technique of swapping items between memory and storage, called paging, is a time- consuming process for the computer. When an OS spends more time paging instead of executing, it is said to be thrashing.

28 Coordinating Tasks A task, or job, is an operation the processor manages. Tasks include receiving data from an input device, processing instructions, sending information to an output device, and transferring items from storage to memory.

29 Coordinating Tasks While waiting for devices to become idle, the OS places items in buffers. A buffer is a segment of memory or storage in which items are placed while waiting to be transferred from an input device or to an output device.

30 Coordinating Tasks The OS commonly uses buffers with printed documents. Spooling is a process that sends documents to be printed to a buffer instead of sending them immediately to the printer. If the printer does not have its own memory or its memory is full, the OS will hold the documents waiting to be printed while the printer prints at its own rate.

32 Configuring Devices A driver, short for device driver, is a small program that tells the OS how to communicate with a specific device. Each device on a computer, such as mouse, keyboard, etc., has its own specialized set of commands and requires its own specific drivers. When you boot a computer, the OS loads each device’s driver.

33 Configuring Devices If you attach a new device to a computer its driver must be installed before you can use the device. Plug and Play means the OS automatically configures new devices as you install them. With PnP, a user plugs in a device, turns on the computer, and then uses the device without having to configure the system manually.

34 Establishing an Internet Connection
Operating systems typically provide a means to establish Internet connections. Windows automatically configures some broadband Internet connections as soon as you connect to the broadband line. Some OSs include a Web browser and e- mail program and some also include utilities to protect computers from unauthorized intrusions.

35 Monitoring Performance
A performance monitor is a program that assesses and reports information about various computer resources and devices. Users can monitor the processor, disks, network, and memory usage. This information can be used to identify a problems with the computer’s resources.

38 Updating Software Automatically
An automatic update feature automatically provides updates to programs. With OSs, these updates can include fixes to program bugs, or errors, enhancements to security, modifications to device drivers, access to new or expanded components, and updates to application software.

40 Controlling a Network A server operating system is an OS that organizes and coordinates how multiple users access and share resources on a network. Resources include hardware, software, data, and information.

41 Administering Security
For each user, the computer or network administrator establishes a user account, which enables a user to access, or log on to, a computer or a network. Each user account typically consists of a user name and password A user name, or user ID, is a unique combination of characters, such as letters of the alphabet or numbers, that identifies one specific user. A password is a private combination of characters associated with the user name that allows access to certain computer resources.

42 Administering Security
To keep unauthorized users from accessing computer resources, keep your password confidential. While users type a password, most computers hide the actual password characters by displaying some other characters such as asterisks (*) or dots. Encryption is the process of encoding data and information into an unreadable form to protect sensitive data. 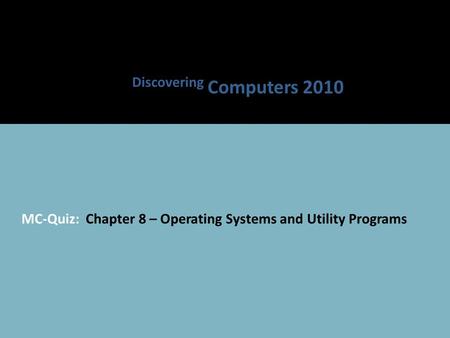 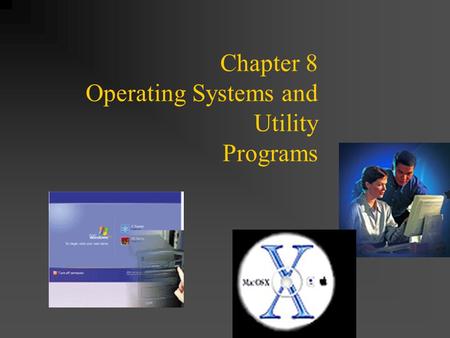