What is mental illness? ‘Mental illness’ is a general term that refers to a group of illnesses affecting the mind, in the same way that physical illness.

Presentation on theme: "What is mental illness? ‘Mental illness’ is a general term that refers to a group of illnesses affecting the mind, in the same way that physical illness."— Presentation transcript:

2 What is mental illness? ‘Mental illness’ is a general term that refers to a group of illnesses affecting the mind, in the same way that physical illness refers to illnesses which affect the body. Episodes of a mental illness can come and go through people's lives. Some people experience their illness only once and then fully recover. For others, it may recur throughout their lives.

4 Mental Health Statistics
Admissions In there were 11,356 admissions (excluding place of safety detentions) to mental health facilities in Wales, up from 11,101 in 99 per cent of the admissions in were to NHS facilities in Wales, with the remainder admitted to independent hospitals. Formal admissions under the Mental Health Act 1983 and other legislation 1,452 were admitted in under the Mental Health Act 1983 (excluding place of safety detentions) and other legislation compared with 1,673 in 93 per cent of formal admissions (excluding place of safety detentions) were detained without the involvement of criminal courts (Part II) with two thirds of these (66 per cent) being admitted for assessment, with or without treatment (Section 2 of the Mental Health Act 1983). Supervised community treatment In there were 263 patients subject to supervised community treatment (SCT), including 2 for whom an independent hospital was responsible. Of this total, 158 were male and 105 were female. Of those patients subject to SCT, there were 106 recalls to hospital, 64 revocations and 52 discharges in

6 What is the purpose of mental health legislation?
‘To regulate the circumstances in which the liberty of persons who are mentally disordered may be restricted and, where there is conflict, balance their interests against those of public policy’ McGowan LJ in R v Secretary of State for the Home Department ex p K [1990] 3 All ER 562

7 Why was the 2007 review necessary?
To help ensure that people with serious mental disorders receive treatment necessary to protect them and the public from harm To simplify and modernise the definition of mental disorder and the criteria for detention To bring mental health legislation into line with modern service provisions To strengthen patient safeguards and tackle human rights incompatibilities.

8 Mental Health Act Definitions
Under the new MH Act, there is a single definition of mental disorder: ‘any disorder or disability of the mind’ Exclusions: Learning disability, unless ‘associated with’ abnormally aggressive or seriously irresponsible behaviour Dependence on alcohol and drugs

10 What is meant by ‘medical treatment’?
“Medical treatment includes nursing, psychological intervention and specialist mental health habilitation, rehabilitation and care” “shall be construed as a reference to medical treatment the purpose of which is to alleviate, or prevent a worsening of, the disorder or one or more of its symptoms or manifestations”

11 People who may be involved in the admission process
General Practitioner Approved Clinician (AC) Approved Mental Health Professional (AMHP) Nearest Relative Carer Police Ambulance Crew Magistrate Section 135: Warrant to search for and remove a patient; If the person isn't already under a section of the Mental Health Act, an approved social worker must apply to a magistrate. If the person is already under a section and has absconded, a hospital employee or police officer can apply to a magistrate. Administration Staff

12 What are the most common elements of the Mental Health Act?
Section 2 – admission for assessment (up to 28 days) Section 3 – admission for treatment (up to 6 months & may be renewed, initially for 6 months, annually thereafer) Section 4 - Admission for assessment in cases of emergency Section 5(2) - Doctors and Approved Clinicians Holding Power (up to 72 Hours) Section 5(4) - Nurses Holding Power (up to 6 Hours) Part 3 – provision for mentally disordered offenders Section 117 Aftercare – Duty of LA to provide service (no charge)

13 Section 2: Admission for Assessment
Duration - Up to 28 days Application - AMHP or Nearest Relative. (report from AMHP required) Medical Recommendation x 2-One by ‘S12’ doctor. The other by doctor who has previous knowledge of patient, if practicable. Criteria – The patient is: a) suffering from a mental disorder of a nature or degree which warrants the detention of the patient in a hospital for assessment (or assessment followed by medical treatment) and b) ought to be detained in the interests of his/her own health or safety or with a view to the protection of other persons. Appeal - Apply to Mental Health Review Tribunal within 14 days. Must take place within 7 days. Decision within 3 days.

14 Section 3: Admission for Treatment
Duration - Up to 6 months: Renewable for 6 months, thereafter 12 months. Application - AMHP or Nearest Relative. Medical Recommendation x 2 - One by ‘S12’ doctor. The other by doctor who knows the patient, if practicable. Criteria - a) Mental illness of a nature or degree which makes it appropriate for him/her to receive medical treatment. b) It is necessary for the health or safety of the patient or for the protection of other persons. Appeal - Can apply to Mental Health Review Tribunal once in each period of detention.

15 Section 117 Aftercare Section 117 aftercare applies to people who have been detained under Section 3. The Local NHS Trust and Social Services must provide after-care services for anyone who is eligible until practitioners are satisfied that the person concerned no longer needs them.

16 Health inspectorate Wales (HIW)
Reviews the operation of the Act and the way in which powers of detention are exercised. Welsh Minsters have the responsibility under the Act to monitor its use, which HIW undertakes on their behalf. This work was previously undertaken by the Mental Health Act Commission (MHAC) Carries out official visits to Hospitals Provides Second Opinion Appointed Doctors (SOAD) for Consent to Treatment. Receives complaints in regard to any matter relating to the detention and treatment of patients under the Act. Monitors deaths of detained patients.

17 What were the key changes to the Mental Health Act?
Responsible Medical Officer (RMO) to Responsible Clinician (RC) Functions generally the same and has ‘overall responsibility for the patient’s case’ Must be approved (an ‘approved clinician’) Can now be a registered medical practitioner, a chartered psychologist, a first level nurse (MH or LD), an occupational therapist or a social worker

18 What were the key changes to the Mental Health Act?
ASW to Approved Mental Health Practitioner (AMHP) Functions generally the same, with additional functions under Supervised Community Treatment (SCT) Approved by Local Social Services Authorities AMHP regulations allow for a social worker, a chartered psychologist, a first level nurse (MH or LD) or an occupational therapist.

21 Nearest relative - Displacement
The 2007 Act has changed in two ways: Not a suitable person Right for a patient to apply

22 What were the key changes to the Mental Health Act?
Supervised Community Treatment (SCT) Provides for some patients to live in the community while still being subject to powers under the Act to ensure they continue with the treatment they need The aim of SCT is to break the cycle in which some patients leave the hospital and do not continue with their treatment. Can only be offered (through a Community Treatment Order – CTO) to patients subject to a Section 3. Initially lasts for 6 months: can be extended for 6 months then one year at a time.

23 Electro-convulsive therapy
New safeguards for patients introduced: Abolition of the power to impose ECT on a detained patient who has the capacity to consent, other than in an emergency situation ECT can only be given when the patient gives consent, or is incapable of giving consent.

24 What were the key changes to the Mental Health Act?
The Mental Health Act 1983 Code of Practice for Wales A Code of Practice specifically for Wales for the first time, reflecting Welsh policy and strategy Provides the principles and guidance on how the Act should be applied in practice. Nine guiding principles, under three broad headings of equity, empowerment and effectiveness & efficiency: should be considered during any decision making process under the Act

25 Guiding principles - Empowerment
Patient well-being and safety should be at the heart of decision-making Retaining the independence, wherever practicable, and promoting the recovery Patients should be involved in the planning, development and delivery of their care and treatment Practitioners performing functions under the Act should pay particular attention to ensuring the maintenance of the rights and dignity of patients, their carers and families, while also ensuring their safety and that of others

26 Guiding principles - Equity
Practitioners must respect the diverse needs, values and circumstances of each patient The views, needs and wishes of patients’ carers and families should be taken into account in assessing and delivering care and treatment Practitioners should ensure that effective communication takes place between themselves, patients and others

27 Guiding principles – Effectiveness and efficiency
Any person made subject to compulsion under the Act should be provided with evidence based treatment and care, the purpose of which should be to alleviate, or prevent a worsening of, that person's mental disorder, or any of its symptoms or manifestations. Practitioners should ensure that the services they provide are in line with the Welsh Assembly Government’s strategies for mental health and learning disability

29 Deprivation of Liberty Safeguards
Come into play when: Someone who has a mental disorder, and Who lacks capacity to make decisions for themselves, Is (or is to be) deprived of their liberty In a hospital or care home Except where that person: Is detained under the provisions of the Mental Health Act 1983, or Is under 18 years of age

32 Mental Health (Wales) Measure 2010, where are we now?
'Part 4 of the Mental Health (Wales) Measure 2010 expands the statutory independent mental health advocacy scheme established by the 1983 Act. Patients subject to certain "short term" sections of the 1983 Act, and those in hospital informally (i.e. not under compulsion) are able to access the service. The Welsh Assembly Government expanded independent mental health advocacy scheme. This will relate to the provision, appointment and approval of advocates. It will also say which people advocates can talk to in undertaking their role of supporting patients. 'Part 3 of the Mental Health (Wales) Measure 2010 is concerned with mental health assessments for former users of secondary mental health services. Regulations under this part of the Measure set out certain eligibility criteria for such assessments. For example, the length of time a person will be eligible for such an assessment following their discharge from services. concerned with the coordination of secondary mental health services, and care and treatment planning for secondary mental health service users. Regulations connected to Part 2 of the Measure relates to the appointment of care coordinators and the making, reviewing and revising of care and treatment plans.

Download ppt "What is mental illness? ‘Mental illness’ is a general term that refers to a group of illnesses affecting the mind, in the same way that physical illness." 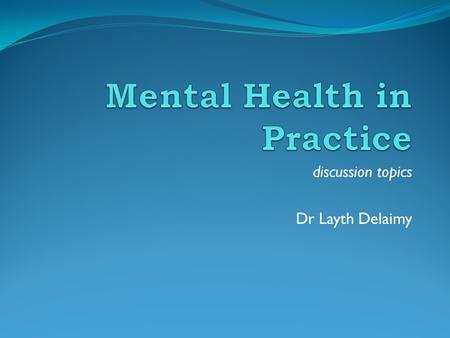 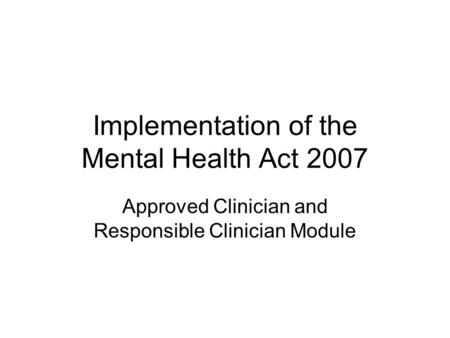 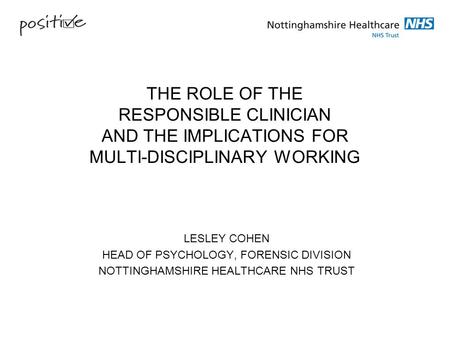 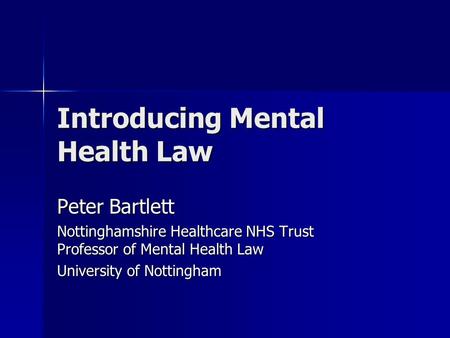 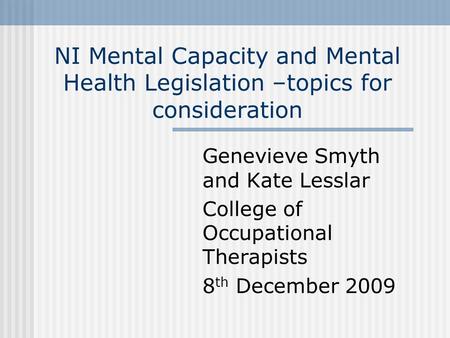 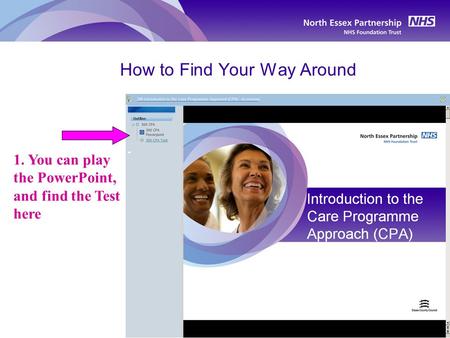 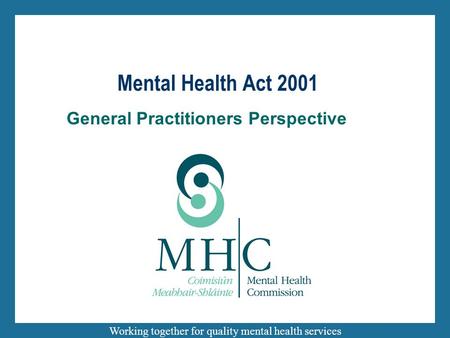 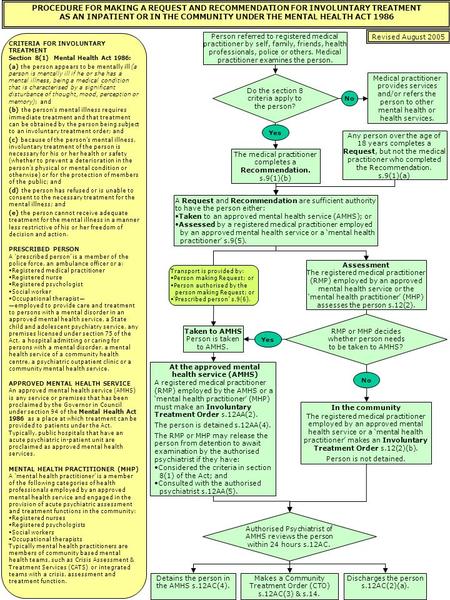 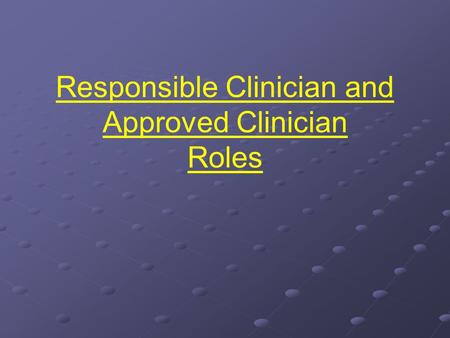 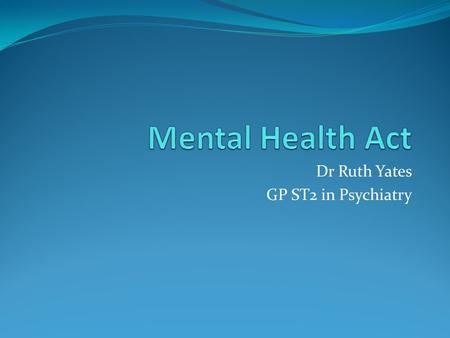 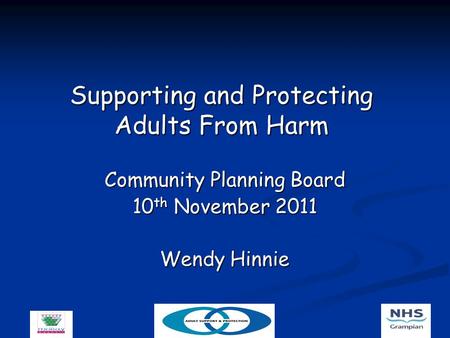 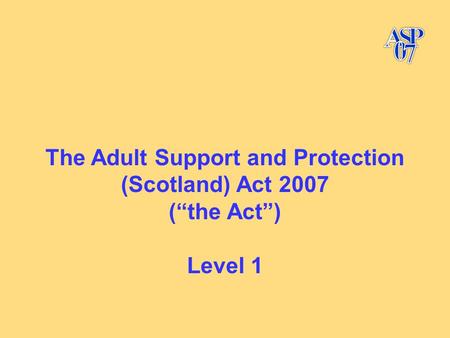 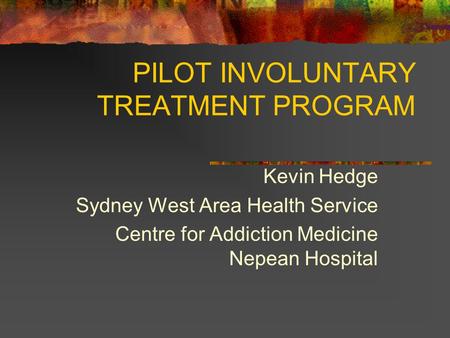 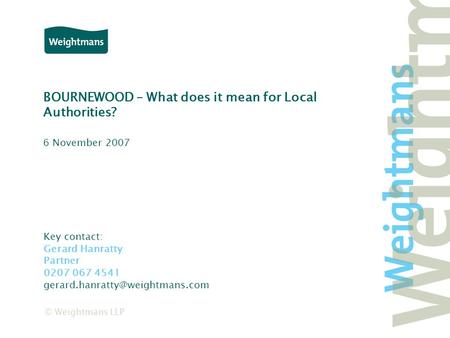 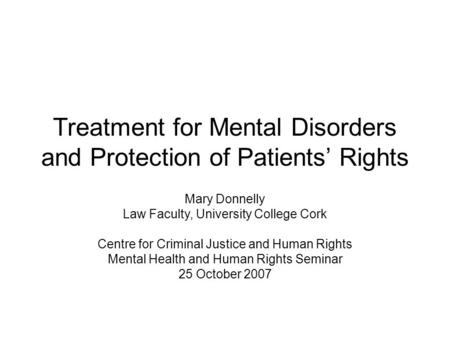 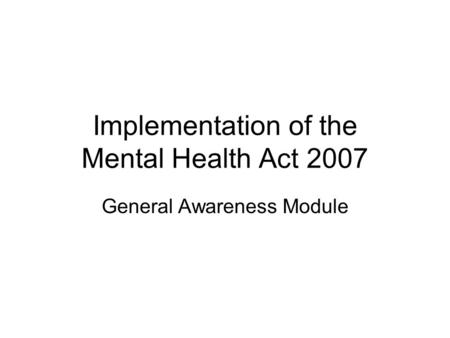 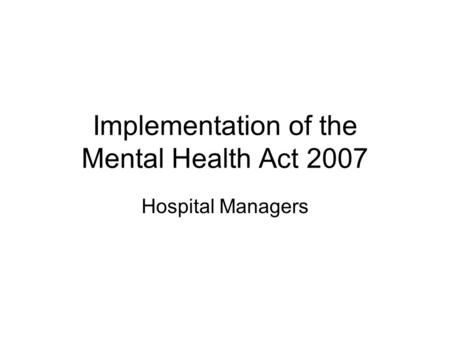 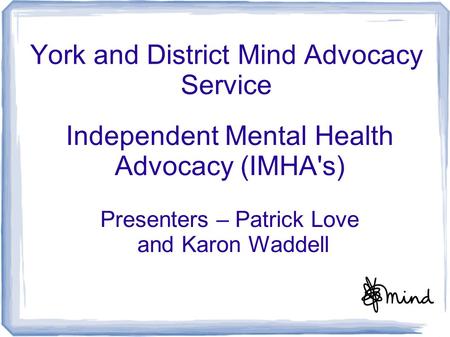 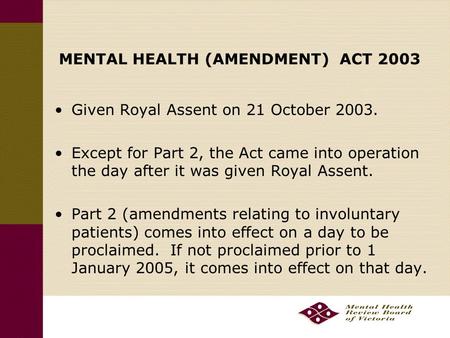 MENTAL HEALTH (AMENDMENT) ACT 2003 Given Royal Assent on 21 October Except for Part 2, the Act came into operation the day after it was given Royal.