3 Section 17.1 – Solar Energy The sun obtains its energy through thermonuclear fusion. High temperatures in the sun’s core cause hydrogen nuclei to fuse, or join, forming helium nuclei. As each helium nucleus forms a loss of mass occurs, this is converted to heat and light energy of the sun.

4 Section 17.1 – Solar Energy Advantages of Solar Energy Free Clean
Non-polluting Can be collected and stored Drawbacks of Solar Energy Energy source is not constant Limited sunlight; like cloudy/rainy days Devices for storing it are not very efficient (expensive)

5 Section 17.1 – Solar Energy Passive Solar Energy
Sunlight energy is used directly as a source of light or heat. The sun’s energy is collected, stored, and distributed naturally in an enclosed dwelling. Greenhouse Enclosed car with windows up on a hot day Not used to produce electricity. Provides an alternative source of heat. Helps reduce the use of fossil and nuclear fuels. Building houses where the windows face the majority of sunlight – dark roof and sides.

8 Active Solar Energy Use of solar collectors – mounted on roofs
Use water which heats to steam.

10 Section 17.1 – Solar Energy Photovoltaic Cells (PV cells)
A solar cell that produces electricity. Use thin wafers of semiconductor material to produce electricity directly from solar energy. Sunlight strikes the cell causing electrons to move from one slice of material to the other. The movement of electrons results in an electric current. Includes the use of calculators, satellites, and watches.

11 Section 17.2 – Hydroelectric Energy
Electricity that is produced from the energy of moving water. Water power is an indirect use of solar energy. Construction of dams to control the rate of the water.

14 Section 17.4 – Geothermal Energy
The heat generated within the Earth. It does not involve the energy from the sun. Source is generated by the decay of radioactive elements deep beneath the ground. Enough heat is present deep within the Earth to melt rock. Magma is molten rock. Lava is magma that has reached the surface. Includes geysers, steam vents, hot springs

17 Section 17.4 – Geothermal Energy
Nuclear fusion – two atomic nuclei fuse to become one larger nucleus. Source of energy given off from the sun. Problem - Not yet learned to control and harness the energy and use it efficiently. The fuel for nuclear fusion is Hydrogen and its isotopes. H-2 abundant in seawater. 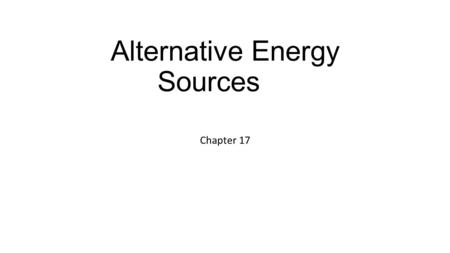 Alternative Energy Sources Chapter 17. Hydroelectric Energy -Electricity that is produced from the energy of moving water. -Anything that has mass, and. 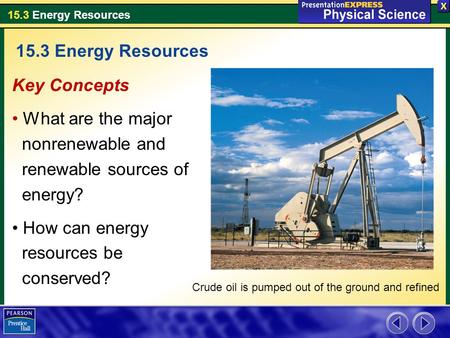 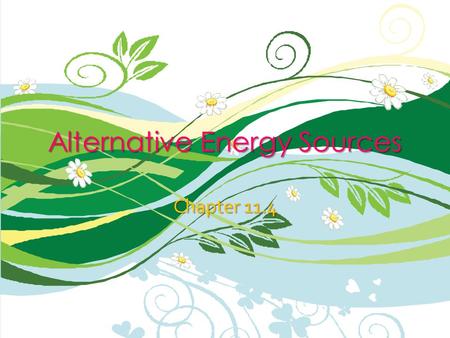 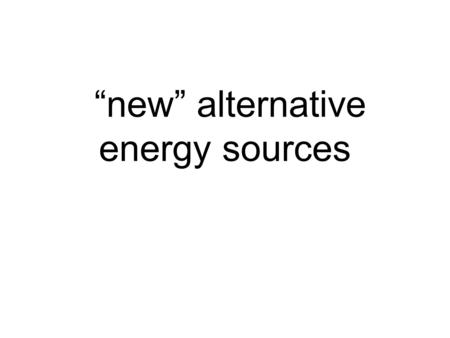 “new” alternative energy sources. How do energy conscious people feel about wind power? They were blown away.