2 Energy An essential part of modern society Need reliable supply The U.S. constitutes less than 5% of the world population, but uses 26% of the world’s energy.

5 Vocabulary Alternative: options besides fossil fuels. Renewable: energy source that is replaced or restored as it is used. Nonrenewable: once you burn them, they are used up.

13 Advantages: Fueled by the wind, so it's a clean fuel source No combustion of fossil fuels, no air pollution Wind supply is abundant and can’t be used up (renewable) Lower cost

14 WIND ENERGY Disadvantages: When the wind isn’t blowing, the windmills aren’t turning and no power is being generated or sometimes the wind can be too strong. A single windmill will not produce a lot of electricity. Instead, hundreds or thousands are needed depending on the production goals. For some people, a lot of windmills can be an eyesore. Take a large amount of space Noise produced by the rotor blades Birds have been killed by flying into the rotors

15 Biomass Energy derived from burning organic material such as wood, alcohol, and garbage.

16 Pros and Cons of Biomass Advantages: Cheap source of energy, reduces landfills. Disadvantages: Causes air pollution. May use more energy than it creates.

17 Hydroelectric Energy produced by running water. A dam is built to hold back the water, forming a lake behind the dam. As water is released, its force turns turbines in the dam that generate electricity.

25 Geothermal Reservoir When the hot water and steam accumulate in permeable and porous rock, a geothermal reservoir forms.

29 Advantages of Geothermal Energy Clean energy – no burning, little to no air pollution, no fossil fuels No “smog” or acid rain emissions Uses little land, less than all other energy types Is renewable and sustainable Generates continuous, reliable power – 24 hrs/day Less expensive than other energy plants 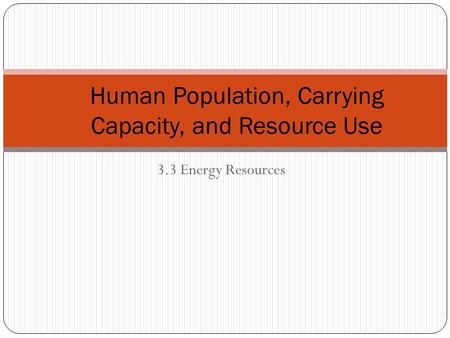