3 e.g. malleability, color, hardness and conductivity.
Every sample of a given substance has identical intensive properties because every sample has the same composition. Physical Property is a quality or condition of a substance that can be observed or measured without changing the substance’s composition. e.g. malleability, color, hardness and conductivity. States of Matter Particles are packed closely together Particles are packed closely together but they are free to flow past one another Particles are relatively far apart and can move freely Solid Liquid Gas Definite shape Indefinite shape Indefinite shape Definite volume Definite volume Indefinite volume Not easily compressed Not easily compressed Easily compressed

4 Vapor is a word that describes the gaseous state of a substance that is generally a liquid or solid at room temperature. e.g. water vapor If the appearance of the matter changes without changing its composition, it is called physical change. e.g. boiling, evaporation, freezing, melting, and condensing. These characteristics are said to be reversible physical changes because a substance can be reformed again to its original shape. While cutting, breaking, splitting, crushing, and grinding are irreversible physical changes.

10 How can we separate mixtures??
The best way for separation, solid from the liquid in heterogeneous mixtures is filtration. But if we have liquid with a solid dissolves in, like salt and water (homogeneous mixture), we have to use a process called, distillation.

13 Element is the simplest form of matter that has unique properties. e.g. sodium (Na), hydrogen (H) Compound is a substance that contains two or more elements chemically combined together. e.g. sodium chloride (NaCl) Compounds can be broken into simpler substances but elements cannot. If the composition of a matter changed into a new matter different than the original one, it is called chemical change.

17 How can you tell whether a chemical change has taken place?
There are four possible clues to chemical change: a transfer of energy a change in color producing a gas forming a precipitate a solid that forms and settles out of a liquid mixture. 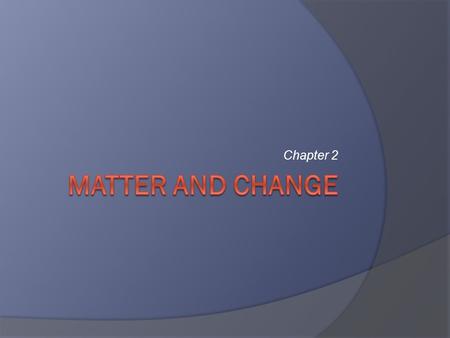 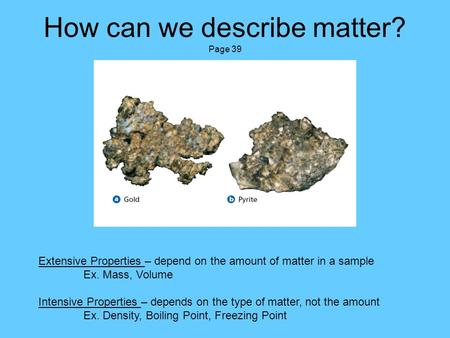 How can we describe matter? Page 39 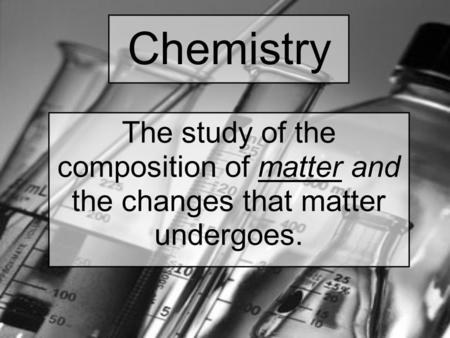