8 Choose appropriate words to fill in the gaps below:
Most of our electricity is produced by __________ power stations. These use the _______ produced by burning _____ or the fission of __________ to generate electricity. The heat produced is used to change ________ into high pressure steam. This steam is used to turn a _________ which in turn _________ an electrical generator. Over _______ of our electricity is generated by using thermal power stations. thermal fuels heat uranium water turbine rotates 90% WORD SELECTION: rotates fuels heat 90% uranium turbine water thermal

11 Wind power Wind is used to drive a turbine directly which rotates an electrical generator. A wind farm

12 Wind power versus thermal power stations
ADVANTAGES Renewable energy source No greenhouse gases No acid rain No radioactive waste Inexpensive to build Short start up time DISADVANTAGES Unreliable – needs wind! Best used in places where they will often be regarded as unsightly Many turbines are needed to produce the same energy of a small thermal power station Noise Danger to wildlife

13 Wave power Waves can be used to drive an electrical generator.

15 Hydroelectric power Falling water is used to drive a turbine directly which rotates an electrical generator. The Hoover Dam near Las Vegas

24 Solar power versus thermal power stations
ADVANTAGES Renewable No greenhouse gases No acid rain No radioactive waste Short start up time DISADVANTAGES Unreliable in the UK! – sunshine is needed for solar cells Can only be used during the day Only 10% of solar energy is converted into electricity by solar cells Many cells needed to produce the same energy of a small thermal power station

25 Geothermal energy In some volcanic areas hot water and steam rise to the surface. The steam can be tapped and used to drive turbines. This is known as geothermal energy.

27 Electricity generation pie-chart
Most of our electricity is generated by burning fossil fuels (74% according to the pie chart opposite) Nearly 20% is nuclear Less than 5% is currently generated using renewable sources.

28 Problems with fossil fuels
Burning coal, gas and oil produces carbon dioxide. This is a greenhouse gas which causes global warming. Fossil fuel burning can also produce sulfur dioxide gas. This can dissolve in water and produce acid rain which causes damage to forests and buildings. Modern power stations remove most sulfur dioxide producing compounds before burning. Fossil fuels are not renewable. They are running out. Estimates vary between 50 to 200 years to when we will need to find alternative sources of energy. An effect of acid rain

29 Problems with nuclear power stations
Nuclear fuel (uranium) does not produce greenhouse gases and it generates times more energy per kilogram than fossil fuels. However: Nuclear waste is radioactive and may have to be stored safely for thousands of years. Although safe in normal operation, accidents can release radioactive material over a large area. The area around Chernobyl in Ukraine has been closed off since 1986. The destroyed Chernobyl nuclear reactor 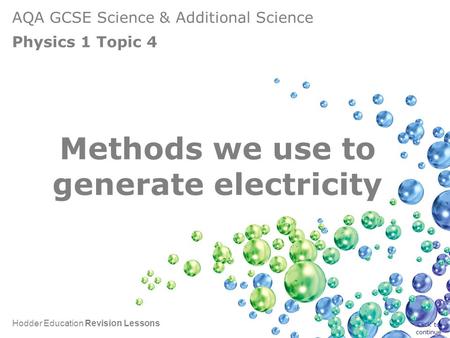