3 Genetic Engineering is a form of selective breeding. Selective Breeding allows only those animals or plants that have desired traits to reproduce.

4 For thousands of years breeders have been selectively breeding dogs that may be better hunters, retrievers or companions.

5 Luther Burbank used a method called HYBRIDIZATION to cross dissimilar daisies to bring together the best of both organisms. This is kind of like our parents. Dad is great at something and mom is great at another. Hopefully, their offspring are great at two or more things.

6 X Insect Resistant Great Scent Hybridization The crossing of the two plants above give us an insect resistant and great smelling rose.

7 For thousands of years people have been selectively breeding plants that produce better tasting fruit or plants that my be unaffected by insects, fungus,disease or other plant destroying pest.

8 Burbank’s best work with plants allowed him to cross disease resistant plants with plants that had high food yields. The result were plants that allowed farmers to increase food supplies.

9 Here scientist show off their very large corn plants that yield lots of corn. This corn is also more resistant to the fungus that affect most corn plants.

11 Despite man’s desire to manipulate plant or animal traits. Scientist have learned that mutations are the ultimate source of genetic variation. Biotechnology has allowed man to transform cells to find greater variation and ultimately a better organism.

13 Transgenic Microorganism reproduce rapidly and are easy to grow. Bacteria are used to make insulin, growth hormone and clotting factors that were all once rare and expensive. This is done by transforming cells by inserting a human gene into the cell of a bacterium. Remember: Way to high joke.

14 When transformation is successful, the foreign DNA will be integrated into one of the cell’s chromosomes.

16 Creating Recombinant DNA When the Recombinant DNA is inserted into the the target location, the host cell’s original gene is lost or knocked out of its place. Transforming Cells

17 Here a transgenic tobacco plant was created by inserting a gene from a fire fly into a tobacco cell.

19 Transgenic plants and animals have played a major role in increasing and improving our food supply.

20 Cloning A clone is a member of a population of genetically identical cells produced by a single cell.

21 Swedish scientist Ian Wilmut stunned the world, in 1997, when he successfully clone a sheep.This is how “Dolly” was cloned.

25 3. To make a new line of plants, Burbank used a process called? A. Inbreeding B. Cloning C. Hybridization D. Transformation

26 4. Which of the following is a clone? A. The adult sheep whose DNA was used to make dolly. B. A transgenic mouse. C. A funny person. D. Dolly

27 5. Why is Dolly considered to be a clone? A. The DNA in her cells are identical. B. She has a funny nose. C. She is genetically the same as her offspring. D. Her DNA source is a single body cell. 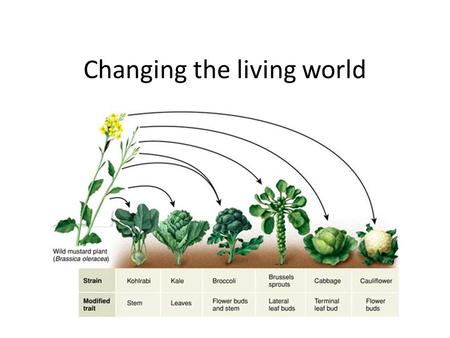 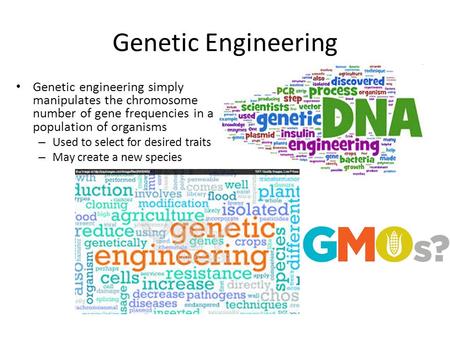