2 15.1 Feeding the World 1985 the lack of rain, loss of soil, and war caused the crops to fail in Ethiopia Famine is widespread starvation caused by shortage of food. By 2050 farmers will need to feed about 30% more population than today.

4 A. Humans and Nutrition Humans use food as a source of energy and as source of materials for building and maintaining body tissues. Energy in food is expressed in Calories (Cal) Major nutrients we get from food are carbohydrates, proteins, and lipids Malnutrition is a condition that occurs when people do not consume enough Calories or don’t eat a sufficient variety of foods. Example: protein-energy malnutrition is when humans don’t consume enough essential amino acids, vitamins, and minerals.

6 1. Sources of Nutrition Diet is the type and amount of food that a person’s eat A healthy diet is one that maintains a balance of the right amounts of nutrients, minerals, and vitamins. In most of the world people eat large amounts of carbohydrates (rice, potatoes, and bread).

9 1. Food Efficiency The efficiency of a given type of agriculture is a measure of the quantity of food produced on a given area of land with limited inputs of energy and resources. Generally more energy, water, and land are used to produce a Calorie of food from animals than from plants. Only about 10% of the energy from plants gets stored in the animals The efficiency of raising plants for food is one reason why diets around the world are largely based on plants.

11 2. Old and New Foods Yield the amount of food that can be produced in a given area Researchers are interested in organisms that can thrive in various climates and do not require large amounts of fertilizer, pesticides, or fresh water. Glasswort a salad green may become an important food source because it can grow in salty soil Seaweed has been harvested and eaten by humans for centuries.

13 C. World Food Problems Many consume about a third of our calories from animals, not grain 1. Poverty Malnutrition today is almost entirely a result of poverty The world’s hungry are nearly all farm workers and subsistence farmers (farmers who grow only enough food for local use) Most of the world hungry live in extreme poverty (income of less than $1.00/day) The world’s hungry live mainly in Africa, Asia and mountains of South America.

14 2. More Income and More Food
The number of people living in extreme poverty has declined by ½ billion since 1980. Grain production has increased but it has not grown as fast as the world’s population. Increasing the productivity of subsistence farmers will go a long way in producing more grain and abolishing poverty.

16 D. The Green Revolution The Green Revolution ( ) is when Mexico increased wheat production eight-fold and India doubled its production of rice without increasing the area of farmland used. New varieties produce large yields if they are supplied with enough water, fertilizer and pesticides. Most of the increase in production came from large farms Research today is devoted to developing plants that produce high yields on poor soil using little water. Distributing the seeds and technology to scattered rural farms remains a problem

18 Stop here and complete the active reading worksheet for 15.1

22 B. Fertile Soil: The Living Earth
Fertile soil is soil that can support the growth of healthy plants. Plant roots grow in topsoil (the surface layer of soil) which is usually richer in organic matter. Fertile topsoil is composed of living organisms, rock particles, water, air and organic matter. Most soil forms when rock is broken down into smaller and smaller fragments.

23 Chemical weathering happens when the minerals in the rock react chemically with substances to form new materials Rock particles supply minerals nutrients to the soil Fungi and bacteria decompose dead plants and organic debris and add more nutrients to the soil Earthworms, insects, and small animals help plants grow by breaking up the soil and allowing air and water into it.

25 C. Soil Erosion: A Global Problem
Erosion is the movement of rock and soil by wind and water. Eroded soil washes in to nearby rivers or is blown away in clouds of dust. ½ of original topsoil in US has been lost to erosion Most farming methods increase the rate of soil erosion

28 D. Land degradation Land Degradation happens when human activity or natural processes damage the land so that it can no longer support the local ecosystem. Desertification is the process by which land in arid or semiarid areas becomes more desert like. Desertification has happened in the Sahel region of northern Africa. The population in the region has grown and the land is being farmed, grazed and deforested faster than it can regenerate. Because of overgrazing the land has few plants to hold the topsoil in place and large areas have become desert.

30 E. Soil Conservation Soil usually erodes downhill and may soil conservation methods are designed to prevent downhill erosion. Example: building soil-retaining terraces, or contour plowing (plowing across the slope of a hill) Drip irrigation ca conserve soil No-till farming a crop is harvested without turning over the soil. Seeds of next crop are planted amount the remains of the previous crop

32 F. Enriching the Soil Soil is enriched by adding organic matter (manure or leaves) As the organic matter decomposes it adds nutrients to the soil Inorganic fertilizers can be used (they contain nitrogen, phosphorus, and potassium) Compost is partly decomposed organic material. Compost can be added to soil to enrich it.

33 G. Salinization Salinization is the accumulation of salts in the soil
Salinization is a problem in places with low rainfall and naturally salty soil Eventually soil may become so salty that plants cannot grow Salinization can be slowed if irrigation canals are lined or if soil is watered heavily

35 H. Pest control Insects eat about 13% of all crops in North America
Worldwide pests destroy 33% of world’s potential food harvest A pest is any organism that occurs where it is not wanted and in large enough numbers to cause economic damage. Wild plants have more protection from pests that crop plants

36 I. Pesticides Pesticides are chemicals used to kill insects, weeds, or other crop pests. Pesticide were so effective that farmer relied on them to protect their crops form pests Pesticide can harm beneficial pants, insects, wildlife, and people

37 1. Pesticide Resistance Spraying crops with large amounts of pesticides cause pest to evolve resistance. Resistance is the ability to survive exposure to a particular pesticide. 500 insects have developed resistance to pesticide since 1940

38 2. Human Health Concerns Pesticides are designed to kill organisms and may be dangerous to humans Cancer rates among children in areas where large amounts of pesticide are used are higher than the national average People who apply pesticide need to follow safety guidelines to protect their selves

39 3. Pollution and Persistence
Persistent pesticides do not break down rapidly into harmless chemicals when they enter the environment. They can accumulate in the soil and water In US many have been banned, example DDT

40 J. Biological Pest Control
Biological pest control is the use of living organisms to control pests. Every pest has natural enemies and these enemies can be used for pest control Example: using the American beetle to control cactus growth in India

42 1. Pathogens Pathogens are organisms that cause disease and can be used to control pests. Bt (bacillus thuringienis)is a bacterium used to kill the caterpillars of moths and butterflies 2. Plant Defenses Plants have been bred to have defenses against pests. Examples of plant defenses include chemical compounds that repel pests and tougher skin (a physical barrier)

43 3. Chemicals from Plants The use of a plants’ defensive chemicals as pest control Example: chemicals found in chrysanthemum plants are sold as home pesticides Are biodegradable and less harmful to humans and pets

44 4. Disrupting Insect Breeding
Growth regulator is a chemical that interferes with some stage of a pest’s life cycle. Flee pills use this to keep flea’s eggs from developing into adult fleas Pheromones chemicals produced by one organism that affect the behavior of another organism. Farmers can use pheromones to interfere with the mating of moths

45 K. Integrated Pest Management
Integrated pest management is a modern method of controlling pests on crops A different management program is developed for each crops When pest damage is found a program to control the pest is created

49 1. Implications of Genetic Engineering
In US we eat and use genetically engineered agricultural products every day. Many products have not been fully tested for their environmental impacts M. Sustainable agriculture Sustainable agriculture is farming that conserves natural resources and helps keep the land productive indefinitely. This minimized the use of energy, water, pesticides, and fertilizers.

51 15.3 Animals and Agriculture
Total energy needed to grow plants for food is much less than the energy needed to raise animals as food. Most animal proteins contain more essential amino acids than proteins found and plants. Domesticated means that animals are bred and managed for human use. Include chicken, sheep cattle, honey bees, silk worms, fish and shellfish.

53 A. Food from Water 1. Overharvesting
Overharvesting is catching or removing from a population more organisms than the population can replace. Many governments have created no-fishing zones so fish populations can recover

54 2. Aquaculture Fish and other aquatic organisms provide up to 20% of animal protein Aquaculture is the raising of aquatic organisms for human use or consumption Most common method is known as a fish farms, fish grow to maturity in the ponds and then are harvested. Another method is ranch where fish are raised until they reach a certain age. 23% of seafood now comes from aquaculture Can cause some problems because used of water depletes local water supplies And large amount of waste can be a source of pollution.

56 B. Livestock Livestock are domesticated animals that are raised to be used on a farm or ran cot to be sold for a profit. Large livestock operations produce most of the meat that is consumed in developed countries In developing countries live stock are used for leather, wool, eggs, meat and used to pull cars and plows.

57 1. Ruminants Ruminants are cud-chewing mammals that have three or four chambered stomachs (cattle, sheep and goats). have microorganisms in their intestines to help digest plant materials that humans cannot digest. When humans eat ruminants we are using them to convert plant material (grass stems and shrubs) into food that we can digest.

59 2. Poultry Since 1961 the population of chickens worldwide has increased by 320%. Poultry are domesticated birds raised for meats and eggs. In developed contrived chickens and turkeys are usually raised in factory farms. Ducks are important in china and produce ducks, silk, rice, and fish 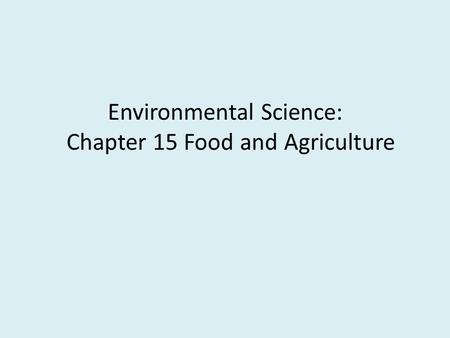