4 Solar Nebula Theory Continued
About 4.5 billion years ago it is believed that the Solar System consisted of a large cloud of gas and dust, called a nebula. This cloud started rotating, and the dust particles combined to form planetesimals. As the cloud rotated faster, it flattened, and the planetesimals formed- Eventually forming planets. Initial composition: -98% hydrogen and helium -2% (carbon, nitrogen, oxygen, silicon, iron)

7 Planetesimals forming planets
From the work of George Witherill, who was the director of DTM while Harold Williams was at DTM. He wrote me my hiring letter which brought me to the Washington Metro area at Alan Boss’ request.

13 Survey of the Solar System
Relative Sizes of the Planets Assume, we reduce all bodies in the solar system so that the Earth has diameter 0.3 mm. Sun: ~ size of a small plum. Mercury, Venus, Earth, Mars: ~ size of a grain of salt. Jupiter: ~ size of an apple seed. Saturn: ~ slightly smaller than Jupiter’s “apple seed”. Uranus, Neptune: ~ Larger salt grains. Pluto: ~ Speck of pepper.

17 Craters on Planets’ Surfaces
Craters (like on our moon’s surface) are common throughout the solar system. Not seen on Jovian planets because they don’t have a solid surface.

18 The Jovian Planets Much larger in mass and size than terrestrial planets Much lower average density All have rings (not only Saturn!) Mostly gas; no solid surface

20 Comets Icy nucleus, which evaporates and gets blown into space by solar wind pressure. Mostly objects in highly elliptical orbits, occasionally coming close to the sun.

21 Meteoroids Small (mm – mm sized) dust grains throughout the solar system If they collide with Earth, they evaporate in the atmosphere.  Visible as streaks of light: meteors.

22 The Age of the Solar System
Sun and planets should have about the same age. Ages of rocks can be measured through radioactive dating: Measure abundance of a radioactively decaying element to find the time since formation of the rock. Dating of rocks on Earth, on the moon, and meteorites all give ages of ~ 4.6 billion years.

25 The Condensation of Solids
To compare densities of planets, compensate for compression due to the planet’s gravity: Only condensed materials could stick together to form planets Temperature in the protostellar cloud decreased outward. Further out  Protostellar cloud cooler  metals with lower melting point condensed  change of chemical composition throughout solar system

26 Formation and Growth of Planetesimals
Planet formation starts with clumping together of grains of solid matter: planetesimals Planetesimals (few cm to km in size) collide to form planets. Planetesimal growth through condensation and accretion. Gravitational instabilities may have helped in the growth of planetesimals into protoplanets.

27 The Growth of Protoplanets
Simplest form of planet growth: Unchanged composition of accreted matter over time As rocks melted, heavier elements sink to the center  differentiation This also produces a secondary atmosphere  outgassing Improvement of this scenario: Gradual change of grain composition due to cooling of nebula and storing of heat from potential energy

29 Clearing the Nebula Remains of the protostellar nebula were cleared away by: Radiation pressure of the sun Sweeping-up of space debris by planets Solar wind Ejection by close encounters with planets Surfaces of the moon and Mercury show evidence for heavy bombardment by asteroids. 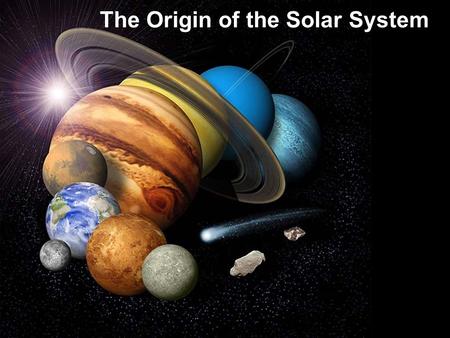 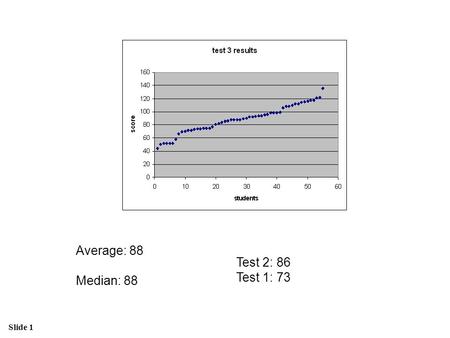