4 Whether to Vote: A Citizen’s First Choice Over time, suffrage has expanded greatly 1800 – only white, property-owning males 21 and older could vote Today – virtually all citizens 18 and older As suffrage expanded, the voter turnout rate has decreased Deciding Whether to Vote: Potentially high opportunity cost to voting Debates about whether to have election day be a holiday or on a weekend Political efficacy – the belief that an individual can have an impact on the government The higher one’s political efficacy, the more likely one is to vote Some people vote out of civic duty, even if they feel their vote won’t make much of a difference

5 Whether to Vote: A Citizen’s First Choice Registering to Vote: Voter Registration Laws: Created to help prevent voter corruption Vary by states Some states made it more difficult to register Motor Voter Act (1993) – states are required to allow registration on driver’s license applications Who Votes? Categories related to voter turnout: Education – the higher the education, the higher the turnout Age – The older an individual, the more likely they are to vote Race – minorities usually vote less often (African Americans voted in high numbers in 2008) Gender – Women vote at slightly higher rates than men Marital status – married couples vote more often Government Employees – vote more often as well These categories are cumulative – the more one belongs to, the more likely they will vote

6 How American’s Vote: Explaining Citizens’ Decisions Mandate Theory of Elections – belief that the winning candidate has a mandate (authority) to carry out their platform Polk and Manifest Destiny in 1844 Bush in 2004 Party Identification: Party identification helps voters decide who to vote for when little is known about a candidate Over time, people vote for candidates of different parties rather than just one party (ticket-splitting or floating voters) Candidate Evaluation….. 3 aspects of a candidates image that are important to the public: 1. Integrity – the higher the perceived integrity, the more likely a candidate is to receive votes 2. Reliability – The more reliable a candidate is perceived to be, the more likely they are to receive votes (Kerry as a “flip-flopper” in ’04) 3. Competence – arguably the most influential of the 3; perceived intelligence matters for candidates

7 How American’s Vote: Explaining Citizens’ Decisions Policy Voting: The idea that how people vote is based on their preferences of issues 4 Conditions of policy voting: 1. Voters understand their own positions on policies 2. Voters know where candidates stand on issues 3. Voters see differences on issues between candidates 4. Voters vote for the candidate that matches up with their policy preferences It is not always easy to meet all 4 conditions Obstacles to policy voting: Candidates are often ambiguous on issues

8 The Last Battle: The Electoral College Why is there an electoral college? Framers did not want the people to elect the president How are electoral votes determined? 2 Senators per state, plus number of members of the House 538 electoral votes total (100 Senators + 435 members of the House + 3 for D.C.) 1 more than half electoral votes needed to win the presidency (270) State parties select electoral voters Winner-take-all approach: 48 states give all electoral votes to the candidate that wins the most popular votes in the state ME and NE divide up votes based on winners of congressional districts No electoral majority? The House of Representatives (12 th Amendment) chooses among the top 3 candidates (see “Corrupt Bargain of 1824”) Impact of Electoral College? Smaller states are often overlooked in campaigns Candidates often campaign mostly in close “swing” states Smaller states are often overrepresented due to the electors for Senators Helps reinforce the two-party system

9 Understanding Elections and Voting Behavior Elections not only select policymakers, but they shape public policy Democracy and Elections: Retrospective voting – “what have you done for me lately?” The economy has a huge impact on incumbent politicians Elections and the Scope of Government: Those that believe they can influence the government tend to believe the government should have increased power

11 Thanks for watching! Subscribe to my channel Help spread the word Questions? Comments? Leave in comments Congrats, you are half- way done with this book! 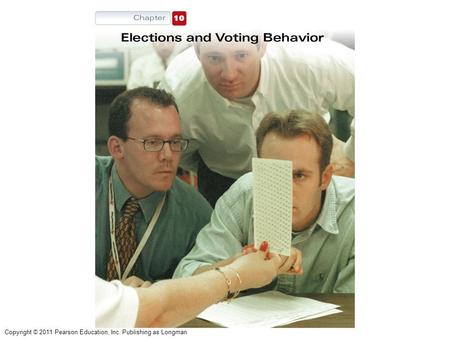 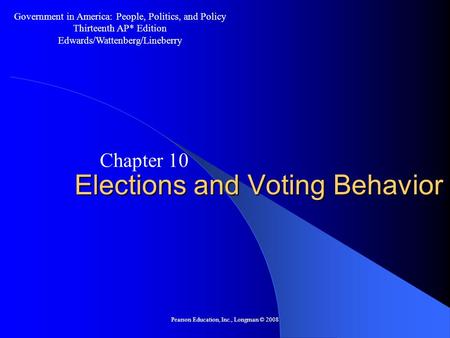 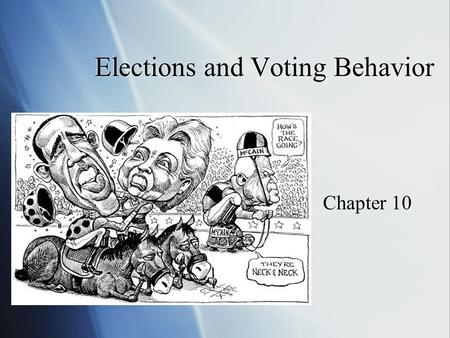