7 They wanted their subjects to be realistic and focused on humanity and emotion New Techniques also emerged Frescos: Painting done on wet plaster became popular because it gave depth to the paintings Perspective: Technique used to make painting appear more 3d. Baroque: Technique that used contrasts between light and dark and used human emotion.

8 Born in 1475 in a small town near Florence, is considered to be one of the most inspired men who ever lived

10 Sistine Chapel About a year after creating David, Pope Julius II summoned Michelangelo to Rome to work on his most famous project, the ceiling of the Sistine Chapel.

17 Literature flourished during the Renaissance This can be greatly attributed to Johannes Gutenberg In 1455 Gutenberg printed the first book produced by using moveable type (Printing Press). The Bible

18 Sir Thomas More English Humanist Wrote: Utopia A book about a perfect society Believed men and women live in harmony. No private property, no one is lazy, all people are educated and the justice system is used to end crime instead of executing criminals. 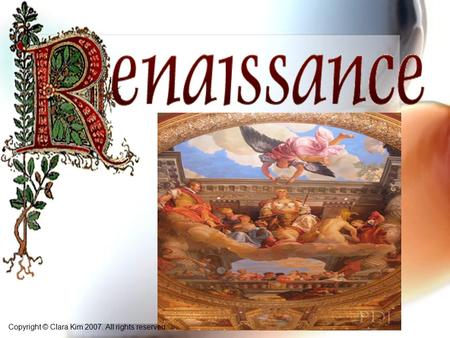