6 Accidents Phineas Gage Story Personality changed after the accident.
What does this tell us? That different part of the brain control different aspects of who we are.

8 Lesions Purposeful removal or destruction of some part of the brain.
Frontal Lobotomy

10 Computerized Axial Tomography
CAT Scan 3D X-Ray of the brain. Good for tumor locating, but tells us nothing about function.

12 Magnetic Resonance Imaging
MRI More detailed picture of brain using magnetic field to knock electrons off axis. Shows the structure of the brain Takes many still pictures and turns images into a movie like production. Does not study function!

14 Positron Emission Tomography
PET Scan: depicts brain activity by showing each brain areas’ use of its chemical fuel Measures how much of a chemical the brain is using (usually glucose consumption). Also shows activity of the brain Good for studying function.

17 Functional MRI Combination of PET and MRI: shows functioning and activity fMRI is good for function, hence the f.

20 Dr. Jones, a brain researcher, is investigating the connection between certain environmental stimuli and brain processes. Which types of brain scans is she most likely to use? A. MRI and CAT B. CAT and EKG C. PET and fMRI D. EKG and CAT E. lesioning and MRI

21 The answer was C. The CAT and the MRI give insight into brain structure, not function.

23 The brain was built like a house, bottom to top. The hindbrain controls basic functions like breathing. Shared with animals The forebrain is the most complex

24 Hindbrain Structures on top of our spinal cord.
Controls basic biological structures. All animals have hindbrains! The brain in purple makes up the hindbrain.

28 What is reticular formation?
Part of brain – affects consciousness. Sleep meds affect this part of the brain. Damage leads to a coma. Controls arousal and ability to focus attention

29 Midbrain Consists of the thalamus Cerebellum and the Limbic system

31 The Limbic System deals with memory and emotions

32 Thalamus Switchboard “relay station” of the brain.
Receives sensory signals from the spinal cord and sends them to other parts of the forebrain. Every sense except smell.

34 Rat with an Implanted Electrode in pleasure center of Hypothalamus

36 Hippocampus Involved in the processing and storage of memories.
Its proximity to your emotional centers explains why memories and emotions are so linked!

38 Amygdala Brain part involved in telling your body to produce norepinephrine (adrenaline) More involved in volatile emotions like anger. The emotion of anger has not changed much throughout evolution.

39 What is the cerebral cortex?

40 The Cerebral Cortex Made up of densely packed neurons we call “gray matter” Wrinkles are called fissures. If you lay brain out it would be as big as a large pizza. It’s divided into 2 hemispheres and 4 lobes! Left and right hemispheres

42 The Cerebral Cortex is made up of four Lobes. Label your brain outline!

44 What is the motor cortex?
Part of the brain in the frontal lobe that tells my body how to move (like typing this).

45 What is the sensory cortex?
It’s the part that deals with touch sensations. It’s In the parietal lobe.

46 What are Motor and Sensory Cortexes?
The wires are switched! Right controls left! The motor cortex is in which lobe?

47 Sensory homunculus A visual representation of how much space
your brain needs to operate parts of your body. Notice how big the face and hands are. How small everything else is!

50 Parietal Lobes Contain Sensory Cortex: receives incoming touch sensations from rest of the body. Most of the Parietal Lobes are made up of Association Areas. Where would this girl feel the most pain from her sunburn?

52 Notice how close the auditory cortex is to the ears.

53 Association areas About ¾ of the brain which is not involved in the sensory or motor activity Association areas integrate information These areas link sensory inputs with stored memories –Very important Found in all 4 lobes In frontal lob association areas allow us to learn, judge and process new memories but damage would not allow you to plan ahead

55 Figure 3B.16 Areas of the cortex in four mammals More intelligent animals have increased
“uncommitted” or association areas of the cortex. These vast areas of the brain are responsible for integrating and acting on information received and processed by sensory areas. © 2011 by Worth Publishers

56 Temporal Lobes Process sound sensed by our ears.
Interpreted in Auditory Cortex. NOT LATERALIZED. Sound goes to both temporal lobes

57 Aphasia- impaired use of language
Broca’s area – production of speech think (boca) (left side of the frontal lobe).Struggle to speak but can sing and comprehend Angular gyrus- speak and understand cannot read aloud Wernicke’s area deals with comprehension of language. Speak meaningless words also disrupts comprehension Which side of brain are we seeing?

59 Figure 3B.18 A simplified model of brain areas involved in language processing
© 2011 by Worth Publishers

60 Figure 3B.19 Brain activity when hearing, seeing, and speaking words PET scans such as these detect the activity of different areas of the brain. © 2011 by Worth Publishers

61 Specialization and Integration in Language

62 Brain Activity when Hearing, Seeing, and Speaking Words
Which side of the brain are we seeing?

63 Brain Plasticity The idea that the brain, when damaged, will attempt to find news ways to reroute messages. Children’s brains are more plastic than adults. Neurogenesis- the ability of the brain to make new neurons

66 When brain researchers refer to brain plasticity, they are talking about
A. the brain’s ability to quickly regrow damaged neurons B. the surface texture and appearance caused by the layer known as the cerebral cortex C. the brain’s versatility caused by the millions of neural connections D. our adaptability to different problems ranging from survival needs to abstract reasoning E. new connections forming in the brain to take over for damaged sections

69 The Corpus Callosum Divides the 2 hemispheres.
Divides the left from right sides. The corpus callosum is cut to prevent seizures from spreading to the other side of the brain.

70 A Tour Through The Brain: Lateralization
The left and right hemispheres of the brain each specialize in particular operations.

72 Split Brain Patients Those who, due to epilepsy, have their corpus callosum cut or removed.

75 A Tour Through The Brain: Split-Brain Research (Continued)

79 On the next slide, say the COLOR of the word without reading the word.

81 Right-Left Brain Differences for the rest of us with intact brains
Right Brain: Perceptual tasks Making inferences Sense of self Problem seeing other people in relation to themselves Cannot recognize themselves in a mirror Left Brain Speaks Calculates Literal interpretation in language Sign language included

82 Brain and Consciousness
What is consciousness? Evolutionary psychologist believe it must be involved with reproduction or survival But how do brain cells talk to one another? No clue how the brain creates consciousness Cognitive neuroscience- science of brain activities connected to mental processes 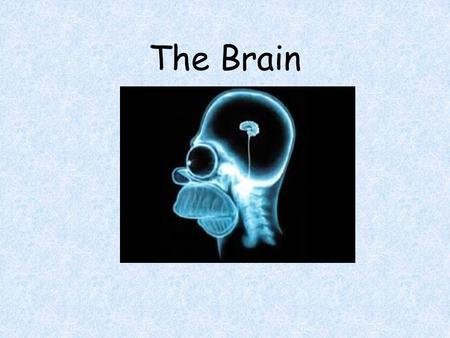 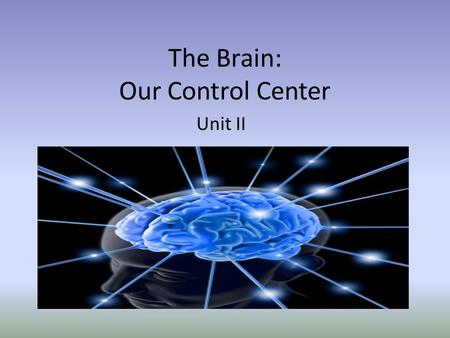 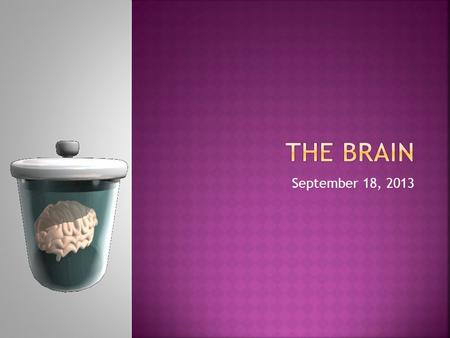 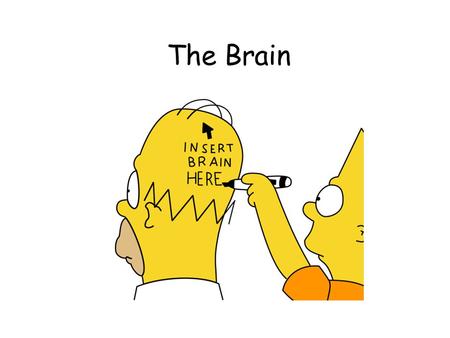 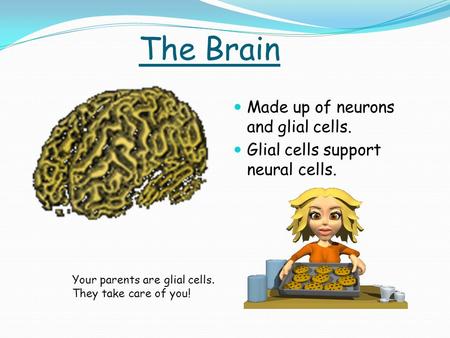 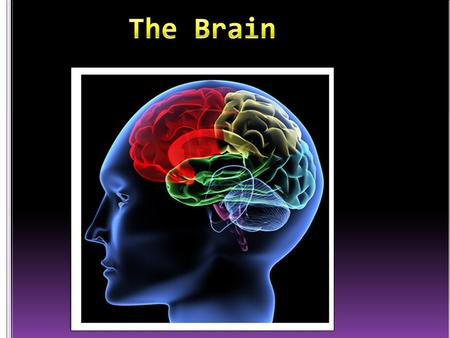 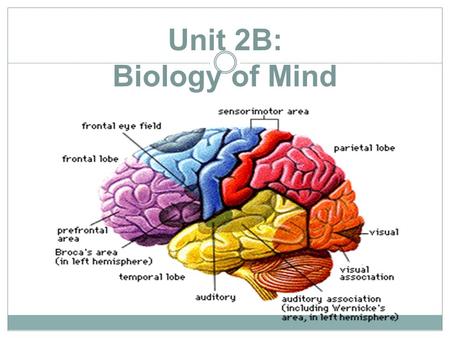 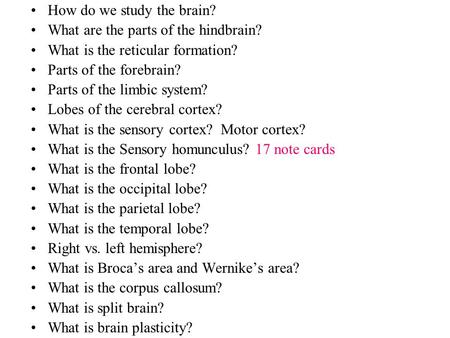 How do we study the brain?