2 What Makes Men and Women Different?
Is it something biologically determined, or is it the result of social and cultural processes? The term sex was taken to refer to the biological characteristics associated with maleness and femaleness. The term gender was used to refer to the social and cultural characteristics of masculinity and femininity. However, this distinction appears likely to be come less clear because the cultural processes of gendering have been found to have a multitude of effects on biology.

4 Biological Determinism
Biological determinism: The idea that certain characteristics are inherently distinct as a result of biological factors. Auguste Comte believed that the division of labor between males and females was biologically determined.

5 Gendering Sociologists today regard gender not as a inevitable outcome of biology but as a process and product of social construction. Gendering: The process by which individuals take on gender identities, behaviors, and actions. There is no such thing a a single, fixed gender identity, such as “man” or “woman.” Gendering is a fluid process that intersects with other identities or aspects of identity, including class, status, ethnicity, and sexuality.

6 Gender and Sports Body image: A person’s perception of his or her own appearance. Body image is not a neutral perception but, rather, is heavily influenced by cultural and social norms and values regarding what is beautiful, masculine, feminine, strong, etc. Body image disorder: A condition characterized by excessive emphasis on the development and appearance of one’s body. Individuals with body image disorders have inaccurate perceptions of their appearance and act in accordance with these distorted perceptions.

7 Gender & Stereotypes Gendering: The process by which individuals take on gender identities, behaviors, and actions. It is a fluid process that intersects with other identities or aspects of identity, including class, status, ethnicity, and sexuality. Stereotype: An oversimplified (and often exaggerated) belief that is applied to an entire social category and/or the individuals within it.

10 Explaining Segregation
Gender ideologies: Sets of cultural beliefs, values, and attitudes about the genders that contribute to the rationalization of inequalities in society. For example, gender ideologies about women’s roles and the lower value of their work help to perpetuate the lower wages they receive relative to men.

11 Explaining Segregation (cont.)
The way the economy works encourages the development of a reserve army of labor Reserve army of labor: A pool of workers who are available for full-time work in times of scarce labor and can easily be fired or put on part-time schedules when there is less work. Typically composed of women and minorities.

13 Exploitation and Abuse (cont.)
Gender abuse: Exploitation and violation of people (more often women than men) on the basis of their gender. Gender abuse includes but is not limited to sexual harassment, sexual assault, rape, and genital mutilation.

14 Culture and Mass Media Gender-neutral language: Language that avoids gendered nouns and pronouns such as mankind and he. Many feminists have argued that gender inequalities and discrimination are promulgated by terminology that subtly implies masculine dominance and, accordingly, have campaigned in favor of everyday speech that employs gender-neutral language such as humankind and they.

15 Culture and Mass Media (cont.)
Cultural scripts: Patterned norms, values, and behaviors that serve as guidelines for social interaction. Cultural scripts are different for different “characters” such as men and women. For example, because cultural scripts for men differ from those for women, there are different expectations for single males and females on a first date.

16 Culture and Mass Media (cont.)
Cultural dopes: Unthinking followers of fashions and trends. Feminist theorists, in particular, caution against labeling women who adopt beauty regimes as cultural dopes who unconsciously subscribe to a trend that keeps them subordinate to men.

17 Feminists Identity Politics: A category of cultural issues being addressed by feminists that concerns gender identities and includes such topics as mass-media images of women, attitudes toward sexuality, and physical appearance.

18 Strategies for Achieving Gender Equality
For liberal feminists, who emphasize the classical liberal philosophy of individual rights, the main task is to increase women’s freedom of choice and provide more opportunities to exercise their talents.

19 Social Feminists Social feminists advocate more fundamental changes, especially in the economic system, where the exploitation of women’s labor, whether through low-paid employment or unpaid housework, is seen as just one aspect of the drive to make profits by keeping down labor costs.

20 Radical Feminists Radical feminists want fundamental changes as well, but they believe that male dominance will be abolished only when our cultural ideas and practices base on gender are eliminated altogether. Their goal is a “gender-free” society.

21 Study Questions What is the difference between “sex” and “gender”? Why was this distinction introduced? How has it become problematic? What was the major finding from George Murdock’s survey? In what way does his work resonate with classical sociology’s understanding of the social division of labor?

22 Study Questions How has biological determinism been challenged? What kind of evidence contradicts its claims? What accusations have been made about its proponents? How is gender understood in current sociology? What is the difference between horizontal and vertical gender segregation in the workplace?

23 Study Questions What is the reserve army of labor? Why do women and immigrants make up the overwhelming majority of this reserve army? Discuss feminists’ use of Foucault’s theories to condemn diet and beauty regimes as symbolic of female submission. Why have other feminists been reluctant to do so? How do liberal, socialist, and radical feminists differ in terms of their strategies fro achieving gender equality? 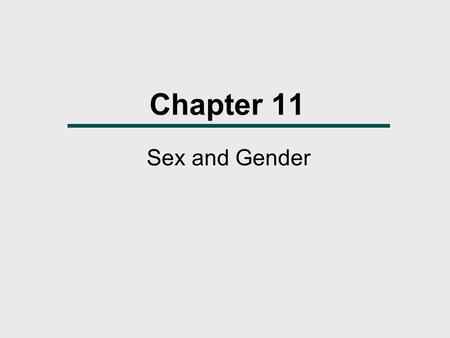 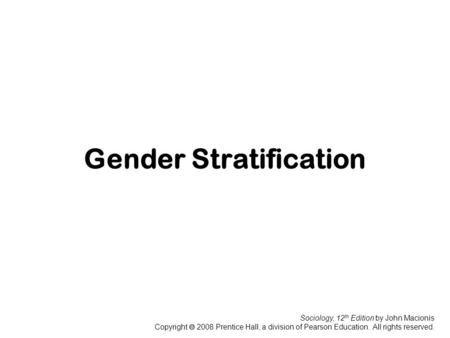