3  HIV is a worldwide concern – one of the most serious public health problems facing our world.  Health care officials consider HIV/AIDS a pandemic.  Many young people who are infected do not know it.

4  AIDS has become one of the deadliest diseases in human history  More than 25 million people around the world have died of this disease, including more than 500,000 Americans  Approx. 12 million of people who have HIV/AIDS are in the 15-24 age group  Half of all new HIV infections are among young people  Everyday about 7,000 young people become infected

9  HIV is fragile virus and cannot live outside human body  Exposure to air at room temp kills virus.  HIV cannot spread through airborne transmission, through casual contact such as shaking hands or hugging, or from insect bites

10  During Sexual Intercourse  By Sharing Needles  From Mother to Baby

15  According to the CDC (Centers for Disease Control), “The U.S. blood supply is among the safest in the world.”  Health care professionals are required to always use sterile needles to draw blood.  All donated blood has been tested for HIV since 1985.

17  There are many actions you can take to avoid contracting HIV/AIDS.  CDC estimates that about 25% of people in the US who are infected with HIV do not know they are infected.  Because they may not know, they may unknowingly spread the virus to others.

18  Practice abstinence  Do not share needles  Avoid situations where drug and alcohol use might compromise your decision making.  Use refusal skills when you feel pressured to engage in risky behaviors.  Knowing as much as you can about the people around you and their behaviors can help you make responsible and informed decisions.

19  Several tests are used to diagnose HIV/AIDS  If someone believes he or she may have been exposed to HIV, person needs to be tested  Testing available in doctor’s office, local health department or hospital and sites that specialize in HIV testing  Blood sample or an oral specimen from between the inside of the cheek and gum is collected and sent to a laboratory for analysis  Results available within two weeks

21  Two other tests- RNA and the CD4 may be run when a Western Blot tests is positive.  These two tests give more of a complete picture of an HIV-infected person’s condition, and if the Dr. needs to prescribe medication or not.  Rapid Test- HIV test that produces results in only 20 minutes.  The rapid test can be used in situations where the infected person may not come back to learn the results of the test.

22  Home testing kits are marketed on the Internet, newspapers, and magazines.  Most are not TRUSTWORTHY!!  Check to make sure that the test is approved by the FDA.

23  Begin proper medical care early to slow the progress of the virus.  Avoid behaviors that could spread HIV to others.  Gain peace of mind when the results are negative.

24  Since the early 1980’s, drugs have been developed that slow the growth of HIV and treat some of the symptoms.  No drug yet exists to cure HIV/AIDS.  Many of the drugs available are also used to treat opportunistic infections. (ex. Pneumonia, cancers, etc.)  To slow the growth of AIDS, patients take combination drugs. 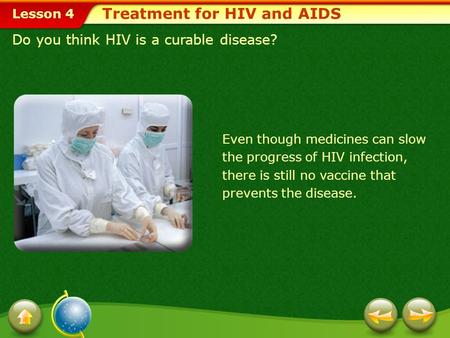