4 What was the problem? The Catholic (west) and Orthodox (east) argued over the following issues Icons Who was in charge? Pope (west) vs. Emperor (east)

6 What is an Icon? Religious images that can be prayed to.
Statue of the Virgin Mary Jesus Christ on the cross They appear in several forms; in mural painting, mosaic and most typically painted on small wooded panels.

14 How does the west react? One pope even ordered the excommunication of a Byzantine emperor—that is, he said the emperor was not a Christian and the church wouldn’t give him recognition any longer. Why is this a problem?

16 The West - Roman Catholic Church
Mass was in Latin Pope was Supreme head of Church in the West - above any political ruler Priests could NOT marry Religious icons of martyrs and saints to be respected Only Pope and Bishops could interpret the scriptures.

17 The POPE is the leader of the WESTERN Roman Catholic Church.

18 The East- Orthodox Church
“Mass” was in Greek - so everyone could understand. Monks who did missionary work often converted it into the language of the people they were trying to convert The Byzantine Emperor was superior to religious leader(patriarch) of Constantinople. Priests could marry Icons not allowed

19 The leader of the EASTERN
Orthodox Church is the “PATRIARCH”. 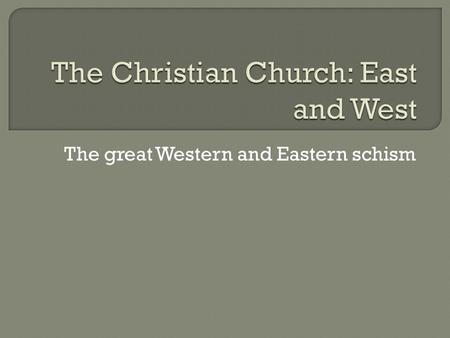 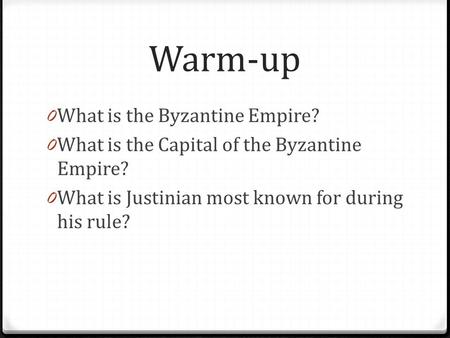