Presentation on theme: "Chapter 6 Our Solar System and Its Origin Comparative Planetology By studying the differences and similarities between the planets, moons, asteroids."— Presentation transcript:

2 Chapter 6 Our Solar System and Its Origin

3 Comparative Planetology By studying the differences and similarities between the planets, moons, asteroids and comets, we can gain a fuller understanding of the solar system as a whole.

4 Side View of Our Solar System

6 The Origins of the Solar System: Four Challenges 1)Patterns of Motion 2)Categorizing Planets 3)Asteroids and Comets 4)Exceptions to the Rules

7 Challenge 1: Patterns of Motion All planets orbit the Sun in the same direction --- counterclockwise when seen from high above the Earth’s North Pole. All planetary orbits lie nearly in the same plane. Almost all planets travel on nearly circular orbits, and the spacing between planetary orbits increases with distance from the Sun according to a fairly regular trend.

11 Challenge 2 The second challenge for any theory of solar system formation is to explain why the inner and outer solar system planets divide so neatly into two classes. Terrestrial Planets Jovian Planets

12 Challenge 3 In order for a theory to be complete, it must also address the issue of Asteroids and Comets. Asteroids are small, rocky bodies that orbit the Sun primarily in the asteroid belt. Comets are small, icy bodies that spend most of their lives well beyond the orbit of Pluto. (Oort Cloud) We generally recognize them only on the rare occasions when one visits the inner solar system.

13 We know today that comets are orbiting the Sun primarily in two broad regions. –The Kuiper (Koy-per) belt: (Begins in the vicinity of the orbit of Neptune ~ 30AU) –The Oort Cloud: Huge spherical region centered on the Sun and extending perhaps half way to nearest stars.

14 The Third Challenge for any theory of solar system formation is to explain the existence and general properties of the large numbers of asteroids and comets. –Why are there so many? –How did their existence come about?

15 Challenge 4: Exceptions to the Rule Mercury and Pluto have larger eccentricities. Pluto and Uranus are substantially tilted. Venus rotates backwards. Some objects don’t fit into the general pattern:

17 The Nebular Theory In the past few decades, a tremendous amount of evidence has accumulated in support of one model. This model is called the Nebular Theory. This Theory holds that our solar system formed from a giant, swirling interstellar cloud of gas and dust.

18 Original Cloud is large and diffuse with little rotation The cloud heats up and spins faster and faster as it contracts This results in a spinning, flattened disk, with mass concentrated near the center Nebular Model

19 What evidence is there in support of the Nebular Theory?

21 Protoplanetary disks around stars in the constellation Auriga

22 Protoplanetary disks around stars in the Orion Nebula (Hubble)

23 Building The Planets Condensation: Sowing the Seeds of Planets –Condensation is the formation of solid or liquid particles from a cloud of gas. –We refer to such solid particles as condensates.

24 The Ingredients of the Solar Nebula Fell Into Four Categories Based on Their Condensation Temperatures: Metals Rocks Hydrogen compounds Light gases

28 Accretion: Assembling the Planetesimals The process of growing by colliding and sticking is called accretion. The growing objects that formed by accretion are called planetesimals, which means “pieces of planets”.

29 Early in the accretion process, there are many Moon sized planetesimals on crisscrossing orbits

30 As time passes, a few planetesimals grow larger by accretion while others collide and are destroyed

31 Only the largest planetesimals avoid being destroyed. These bodies will become the planets of this newly formed solar system

33 The Solar Wind: Clearing Away the Nebula The remaining gas of the solar nebula was blown into interstellar space by the solar wind (a flow of charged particles ejected by the Sun in all directions.) The Solar wind is believed to have been much stronger in the past than it is today.

34 Leftover Planetesimals Origin of Asteroids and Comets: The strong wind from the young Sun cleared excess gas from the solar nebula, but many planetesimals remained scattered between the newly formed planets. These leftovers became the comets and asteroids.

35 The Early Bombardment: A Rain of Rock and Ice The collision of a leftover planetesimal with a planet is called an impact, and the responsible planetesimal is called the impactor. On planets with solid surfaces, impacts leave the scars we call impact craters. Impacts were extremely common in the young solar system.

36 The Earth, Moon and other planets were heavily bombarded with leftover planetesimals.

37 Captured Moons Some moons have unusual orbits – orbits in the “wrong” direction or with large inclinations to the planet’s equator. These unusual moons are probably leftover planetesimals that were captured into orbit around a planet.

38 The two moons of Mars are probably captured satellites.

39 Giant Impacts and the Formation of Our Moon. The largest planetesimals remaining as the planets formed may have been as large as Mars. It is believed that a glancing collision with a Mars sized planetesimal was reponsible for forming our Moon.

40 Earth Impact with Mars sized Planetesimal Artist’s Conception of the impact of a Mars sized object with Earth which caused the formation of the Moon.

41 Summary: Meeting the Challenges The nebular theory explains the great majority of important facts contained in our four challenges. However, planetary scientists are still struggling with more quantitative aspects, seeking reasons for the exact sizes, locations, and compositions of the planets.

42 Other Planetary Systems How common are planetary systems? Observations have confirmed that protoplanetary disks are common. Rapid advances in observational astronomy have allowed us to search for actual planets around other star systems. In the beginning of 1990, there was no conclusive proof that planets existed around any star but the Sun. By 2001, dozens of planet like objects have been detected around other stars.

43 Doppler shifts allow for the detection of slight motions of a star due to perturbations caused by the orbiting planet.

Download ppt "Chapter 6 Our Solar System and Its Origin Comparative Planetology By studying the differences and similarities between the planets, moons, asteroids." 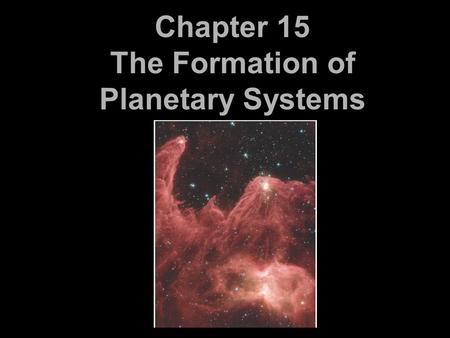 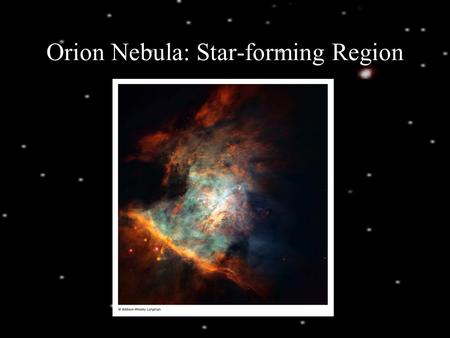