Presentation on theme: "Andy Warhol (1928–1987) Does anyone recognize this artist? What can you tell me about him?"— Presentation transcript:

2 Warhol’s Life Born in 1928 in Pittsburgh, Pennsylvania
Sick as a child and stayed home from school for long periods of time His mom, Julia, taught him to draw Bullet 1: He had two older brothers – Paul and John. Bullet 2: Sick from Sydenham’s chorea, also known as St. Vitus’ Dance, which is a disease of the nervous system. Bullet 3: He spent hours and hours in his room drawing. Andrew Warhola, age 8

4 Developing His Talent Parents encouraged him to develop his art; he took free art classes in elementary school at Carnegie Institute Parents worked hard to send him to art school Graduated from Carnegie Tech with a Fine Arts degree Girl in Park, 1948,  AWF Bullet 1: There were a lot of rich kids in the art classes. Andy dreamed of having lots of money some day. Bullet 2: His father died when he was 13 in an accident. Bullet 3: Warhol both impressed and baffled professors with his quirky solutions to problems and his very unique style. He would sell his sketches for 25 cents.

5 Finding Work Moved to New York in and worked as a commercial illustrator for 10 years Warhola changed to Warhol Bullet 1: The art director at Glamour magazine asked him for drawings of shoes, which she needed the next morning. Andy made the shoes look as if they had been worn, but the art director wanted them to look brand new. Andy re-did the drawings, and this time they were perfect. The illustrations were published in the magazine. His credit read “Andy Warhol,” without the “a” in the last name; from then on that’s what he called himself. Winged Figures and Fashion Accessories (detail), 1950s, ©AWF

6 Warhol’s Early Career as an Illustrator
Andy thought every day objects were beautiful. That’s what he knew, so that’s what he used for his work.

7 Blotted Line Technique
Developed a blotted line technique to create whimsical, decorative, and stylish illustrations Warhol began by making a line drawing on a piece of non-absorbent paper, such as tracing paper. Next he hinged this piece of paper to a second sheet of more absorbent paper by taping their edges together on one side. With an old fountain pen, Warhol inked over a small section of the drawn lines then transferred the ink onto the second sheet by folding along the hinge and lightly pressing or “blotting” the two papers together. Larger drawings were made in sections. Completing a large blotted line drawing could take quite a bit of time and multiple pressings. The process resulted in the dotted, broken, and delicate lines that are characteristic of Warhol’s illustrations. Warhol often colored his blotted line drawings with watercolor dyes or applied gold leaf. (Source: Angel, c. 1957; Female Head, 1950s; Girl's Head, 1950s,

8 At one time, had 25 cats named Sam
25 Cats Name Sam and One Blue Pussy, 1955 Always looking for work; drew pictures of shoes and food, portraits of friends, and his cats At one time, had 25 cats named Sam Bullet 1: When Andy went on job interviews, he didn’t wear a suit. He wore chinos (khakis), T-shirts, and old sneakers. Instead of a briefcase or portfolio of his work, he carried a brown paper bag. Friends nicknamed him “Raggedy Andy” and “Andy Paper bag.” Bullet 2: Andy finally earned enough money to rent his own apartment, but when his mother visited she said it was terrible – dirty and full of mice. She moved in with Andy. To catch the mice, Andy adopted a Siamese cat named Hester and another which his mother named Sam. These two cats eventually had kittens, which were all called Sam. At one point, it is said that 25 cats were living with Andy and his Mom. Andy did a book of drawings about them. He produced 190 copies of it with the help of his friends and his mother. His mother wrote the names of the cats (all Sam) and his friends helped him paint. Each page of all 190 books was done by hand. A book, 25 Cats Name Sam…, is a set of lithographs produced in collaboration with his mother in the 1950's. The title is not mis-spelled; his mother left the 'd' off 'named', and Andy liked the mistake so much that he left it in.

9 Warhol Wanted to Be a Serious Artist
Fame was important Took everyday items and made them art Bullet 1: Andy was a successful commercial artist – drawing and painting every day items for advertising and print (including greeting cards, record albums, and book covers), and he really enjoyed it. He was so busy that he sometimes asked his friends to help him finish the work. But he wanted to become a painter and be recognized as a serious artist. “I want to be as famous as the Queen of England,” he once said.

10 Developed “Pop Art” First artist who was a superstar
Famous like Lady Gaga, Michael Jackson, LeBron James, Madonna, and Mickey Mouse He saw work at galleries by younger artists who created work with a sense of fun. He decided to make gigantic paintings of his favorite comic book characters: Dick Tracy, Superman, and Popeye. Then he saw Roy Lichtenstein’s paintings which were similar to Andy’s. He thought Lichtenstein’s were better and realized he had to do something different.

11 Campbell’s Soup I, 1968 The story goes that one evening in 1960, his friend Muriel Latow, who owned an art gallery, came to visit. Andy asked her for advice. She said, “You should paint something that everybody sees every day … like a can of soup.”

12 32 Campbell’s Soup Cans, 1962 100 Cans, 1962 (oil on canvas)
Left: A fine art gallery in Los Angeles showed all thirty-two Campbell’s soup paintings lined up side by side. Over the next two years, he continued to paint a series of Campbell’s soup cans. Sometimes he used stencils exactly alike except for the flavors. Other times he painted enormous individual still-lifes or sad-looking cans with torn labels. He used a variety of media: pencil, ink, crayons, acrylic, and oil. 100 Cans, 1962 (oil on canvas)

15 Silkscreen So busy that he got help from his mom, friends, and hired assistants Developed “silkscreening” Bullet 2: If one is good, 50 is better. Silkscreen: Andy first did a drawing. He took the drawing to a print shop where it was made into a stencil on a fabric screen. Back in the art studio, Andy placed a large canvas on the floor and stretched the silkscreen over it. He poured paint into a corner of the framed screen and pushed the paint across the surface with a squeegee. Paint went through the porous silk. Over and over, he repeated the same image so “he could be a machine.” When an assistant helped him, the work went faster. Click on link ( to activate video of Andy and assistant silkscreening. This style of producing art with a team of assistants became his trademark. People enjoyed working for Andy, even without pay, because he made projects so much fun.

16 The Factory The artist in his studio, circa 1964
In 1964, because of the growing demand for his work, Andy moved his studio from a firehouse space to a loft in a warehouse on East 47th Street and calls it The Factory. It was THE place to be for artists. They could paint, act, play in a band, all in a huge space while Andy and his team worked on his paintings. The artist in his studio, circa 1964 Artwork: © 2011 The Andy Warhol Foundation the Visual Arts / Artists Rights Society (ARS), New York.

22 Beyond the Canvas Filmmaking and photography Lectured at colleges
Published a magazine, Interview: A Monthly Film Journal Music promoter Returned to painting in 1972 Died in 1987 Bullet 1: Just like his artwork, his movies were about everyday events. Sleep showed a man sleeping for six hours; Empire showed the same view of the Empire State Building for eight hours Bullet 6: Died in his sleep from post-operative cardiac arrhythmia. He was recovering from gallbladder surgery. Andy Warhol, Self-Portraits with Fright Wig, 1986. Courtesy of Anthony d'Offay Gallery, London. © 2011 The Andy Warhol Foundation for the Visual Arts / Artists Rights Society (ARS), New York .

25 The story goes that one evening in 1960, his friend Muriel Latow, who owned an art gallery, came to visit. Andy asked her for advice. She said, “You should paint something that everybody sees every day … like a can of soup.”

Download ppt "Andy Warhol (1928–1987) Does anyone recognize this artist? What can you tell me about him?" 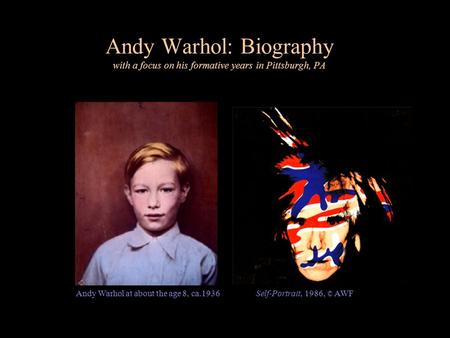 Andy Warhol: Biography with a focus on his formative years in Pittsburgh, PA Andy Warhol at about the age 8, ca.1936Self-Portrait, 1986, © AWF.