Presentation on theme: "The Renaissance. The Crusades greatly affected Europe. They resulted in an increased demand for Middle Eastern products and encouraged credit and banking."— Presentation transcript:

2 The Crusades greatly affected Europe. They resulted in an increased demand for Middle Eastern products and encouraged credit and banking. Italian cities began to flourish because of trade with the Middle East. As trade grew, money became more important (money or bartering was used to trade).

3 Along with trade, banking became an important business. Moneylenders loaned out money, but were not allowed to charge interest because churches were against usury. Church rule against usury and the banks’ practice of charging interest helped to secularize northern Italy.

7 Italian Renaissance As cities grew, other changes also occurred. During this time, there was a revival of interest in Greece and Rome; new ideas, art and literature emerged. This is called the Renaissance. People who studied Greek and Roman grammar, history, poetry and rhetoric were known as humanists. Humanist believed in celebrating the individual.

9 Renaissance Writers There were many Renaissance writers. Two who are still remembered today are Francesco Petrarch and Niccolo Machiavelli. Francesco Petrarch, a humanist, believed that Greek and Roman literature were important to a “classical education.” He wrote sonnets and created his own poetic style.

10 Niccolo Machiavelli wrote an essay called The Prince. It is important for several reasons: a.It was an early modern treatise on government b.It supported absolute power of the ruler c.It maintains that the ends justify the means d.It advises that one should do good if possible, but evil when necessary

11 Main ideas of Machiavelli’s The Prince: -Ruler should have absolute power -The ends justify the means -Sometimes evil actions are necessary to run the government

12 Renaissance Art Several artists from the Renaissance era are remembered for their great skill.

13 Leonardo da Vinci is remembered for his paintings Mona Lisa and The Last Supper.

14 Michelangelo is known for painting the ceiling of the Sistine Chapel and David.

16 Northern Renaissance Writers Erasmus wrote The Praise of Folly (1511) which made fun of ignorance and superstition in the Christian faith. He criticized fasting, pilgrimages and the church’s interpretation of the Bible. Sir Thomas More wrote Utopia (1516). In the book, governments were corrupt and private ownership of property caused problems. His message was that everyone should be equal and work to support society.

17 Shakespeare wrote plays including Hamlet, Romeo and Juliet and Macbeth.

19 Conclusion In Conclusion, the Renaissance reflected a great time of change. Feudalism was fading and cities were becoming more popular. Trade connected Europe to the Middle East and ideas travelled back and forth. Christianity decreased in importance. There was a return of importance of classical Greek and Roman knowledge. There was a revival of ideas, literature and art in Europe.

Download ppt "The Renaissance. The Crusades greatly affected Europe. They resulted in an increased demand for Middle Eastern products and encouraged credit and banking." 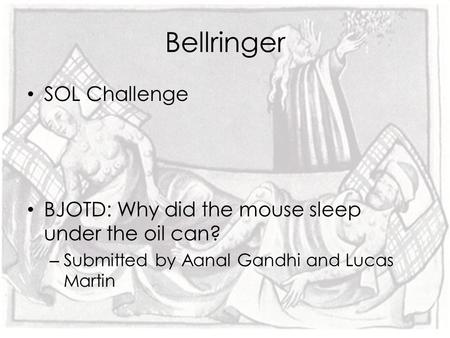