Presentation on theme: " Germany dug itself out of depression by rearming and expanding their armed forces (both of which violated the Versailles Treaty that ended WWI)  Unemployment."— Presentation transcript:

2  Germany dug itself out of depression by rearming and expanding their armed forces (both of which violated the Versailles Treaty that ended WWI)  Unemployment fell to zero, Germany boomed and was ready to put Hitler’s expansion plans to work

3  The German military entered the Rhineland (an area in Western Germany they were supposed to be banned from)  Great Britain and France had not forgotten about the large cost of WWI and did not do anything to stop the Germans  1936- Hitler and Mussolini sign an alliance and create Axis powers (Later joined by Japan)  Axis powers (Germany, Italy, Japan)

5  After Hitler invaded Czechoslovakia, France and Great Britain prepared for war, knowing Hitler did not plan on ending his conquest for more territory  France and GB pledged their support for Poland if Germany invaded them

6  Not wanting to fight a two front war, Hitler agreed to a ten year non- agression pact with the Soviet Union  A secret document of the Pact divided up the independent Eastern European countries between Germany and the USSR  USSR and Germany hated each other but had much to gain by not fighting one another

9  While invading Poland the Germans used their new method of attack known as the Blitzkrieg (Lightning War) Fast, concentrated air and land attack that took the enemy’s army by surprise  German army was more prepared and had better weapons than the Polish, French, and British Armies  Poland was under German control in less than a month  Imposed German laws and persecuted Polish Jews

10  Fortified line of defense built by the French protecting them from the Germans along the German border  Weaknesses: Guns only faced Germany, wall did not protect against Belgium

11  On April 9, 1940 Germany launched a blitzkrieg against the Netherlands, Belgium, and Luxembourg and controlled all of them within 3 weeks  Germany then invaded France through Belgium so they avoided the Maginot Line

13  German forces split the French and British forces in half and trapped many troops in the northern town of Dunkirk, France  Facing heavy artillery from the Luftwaffe (German Air Force), 340,000 troops escaped capture by boarding 900 naval vessels and fleeing to GB

14  After Dunkirk, Germany moved south to Paris which was abandoned by the Government  On June 22 the French surrendered to Germany

16  After the Fall of France, Hitler planned his next invasion: Great Britain  In August 1940 the Luftwaffe unleashed the greatest air attack ever seen upon GB  Day after day as many as 1,000 planes rained bombs on Britain

17  At first the Luftwaffe bombed aircraft factories, oil storage tanks, ports, radio installations, and airfields  In late August German planes started to bomb London and civilians  The bombing of London would target civilian population centers to break their will to resist and would continue until May 1941  Both sides targeted civilians and caused a total war

18  Britain's Royal Air Force (RAF), greatly outnumbered, defended its homeland against the Luftwaffe  By the end of the air raids 20,000 people in London were killed and 70,000 injured

Download ppt " Germany dug itself out of depression by rearming and expanding their armed forces (both of which violated the Versailles Treaty that ended WWI)  Unemployment." 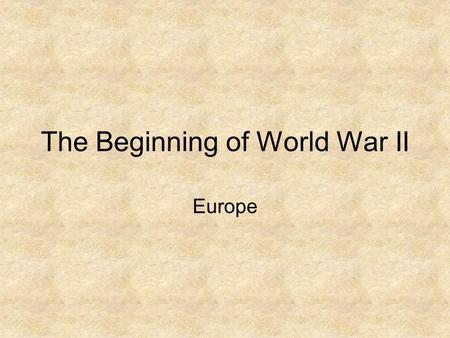 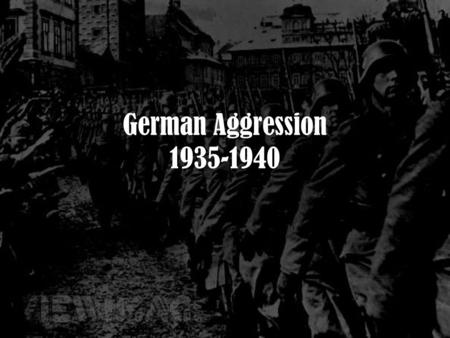 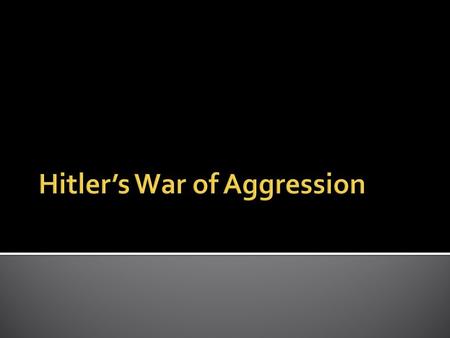