3 Local Authority, Land Use  The majority of planning occurs at the local (city or county) level in California.  City or county authority to regulate land use is derived from its inherent police power, not from the delegation of authority by the state. (constitutional authority)  Local governments create their own codes/ordinances that govern various land use, planning, and zoning regulations.  A land use regulation or action must not be unduly restrictive such that it causes a “taking” of property without just compensation. (US and CA Constitutions)

5 The General Plan –Decisions involving the future growth of the state, most of which are made and will continue to be made at the local level, should be guided by an effective planning process, including the local general plan (GC §65030.1) –The General Plan has been called the “constitution for all future development” of an area by the California courts.  Lesher Communications v. City of Walnut Creek

6 General Plan: Basic Requirements  Each city or county must adopt a General Plan. –Looks at long term growth for the jurisdiction (15-20 year scope) –Addresses land within boundaries and any land outside boundaries that could be affected by policies contained in the General Plan –Comprehensive document that is consistent across all elements

7 General Plan “The general plan shall consist of a statement of development policies and shall include a diagram or diagrams and text setting forth objectives, principles, standards and plan proposals.” (GC § 65302)

11 Elements  Format and Flexibility –Elements may be combined –Plan may be adopted as one document or several documents –The degree of specificity and level of detail of the discussion of each element shall reflect local conditions and circumstances. (GC § 65301)

12 Policy Development The General Plan is a policy document.  Policies that guide future development. –What type of development and where. –Protection of Natural Resources –Health and Safety –Mobility, transportation options Policies should be developed with input from public and stakeholder groups.

15 Public Participation  Public Participation (GC § 65351) “During the preparation or amendment of the general plan, the planning agency shall provide opportunities for the involvement of citizens, California Native American tribes, public agencies, public utility companies, and civic, education, and other community groups, through public hearings and any other means the city or county deems appropriate.”

16 Public Participation Goals and Outcomes  Providing valuable information leading to more informed policy development by decision- makers.  Insuring the plan’s successful implementation by building a base of long-term support with the public.  Reducing the likelihood of conflict and drawn- out battles addressing public concerns during the general plan process rather than on a case by case basis in the future.

21 Amending the General Plan Amendments (GC§ 65358) –No mandatory element shall be amended more than four times during any calendar year (usually done quarterly) Does not apply to Charter Cities.

24 Open Space Element One of the Seven Mandatory Elements. The open-space element guides the comprehensive and long-range preservation and conservation of “open-space land” (GC § 65563).

25 Open Space Element “Open-space land” is any parcel or area of land or water that is essentially unimproved and devoted to an open-space use and that is designated for any of the following:  The preservation of natural resources  The managed production of resources  Outdoor recreation  Public Health and Safety  Support of the mission of military installations, areas adjacent to military installations  Protection of Native American cultural places (GC §65560)

29 Amending/Adopting a Specific Plan “A specific plan shall be prepared, adopted, and amended in the same manner as a general plan, except that a specific plan may be adopted by resolution or ordinance and may be amended as often as deemed necessary by the legislative body.” (GC § 65453) 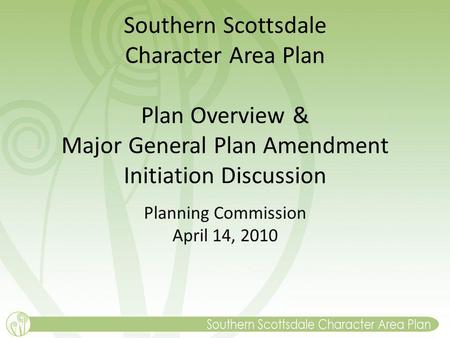 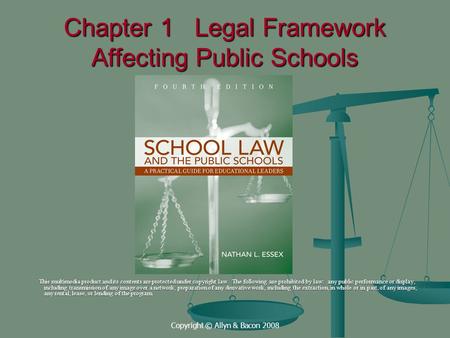 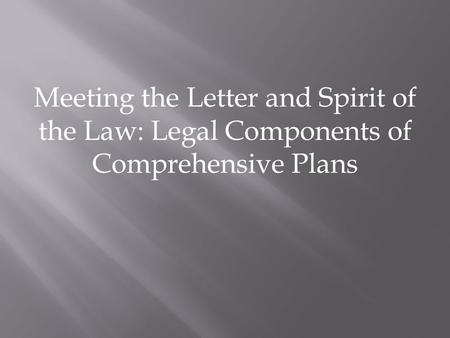 Meeting the Letter and Spirit of the Law: Legal Components of Comprehensive Plans. 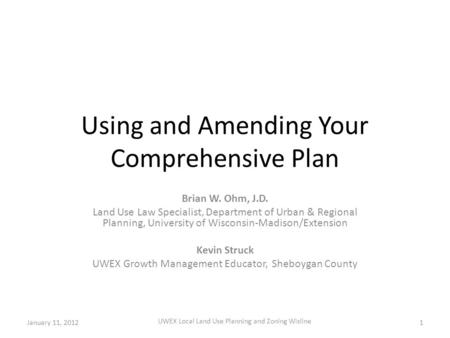 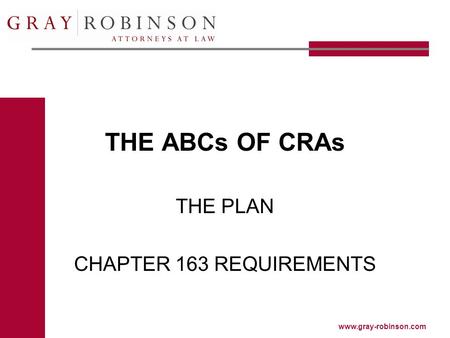 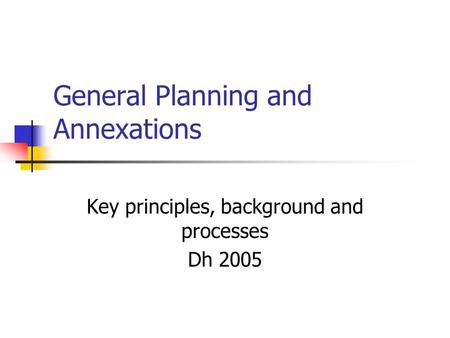 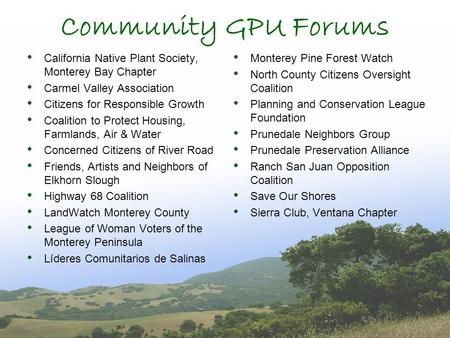 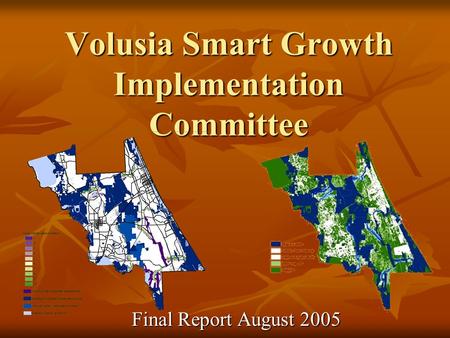 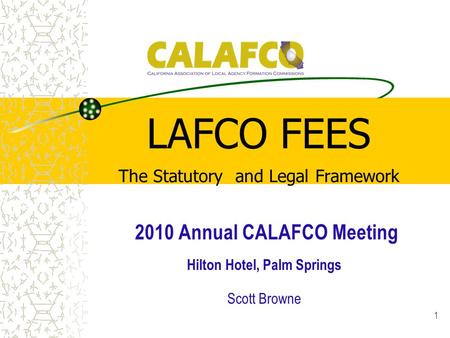 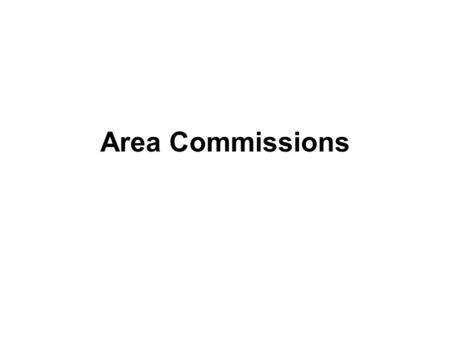 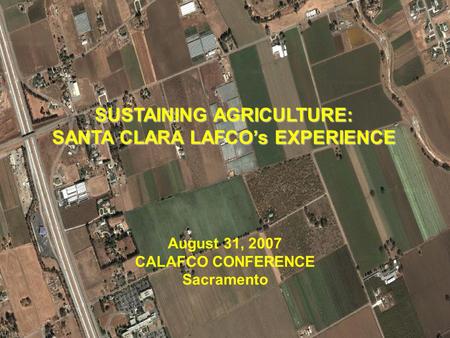 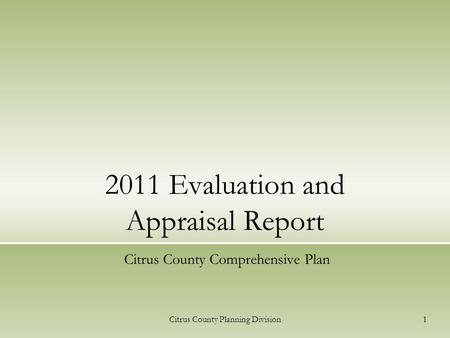 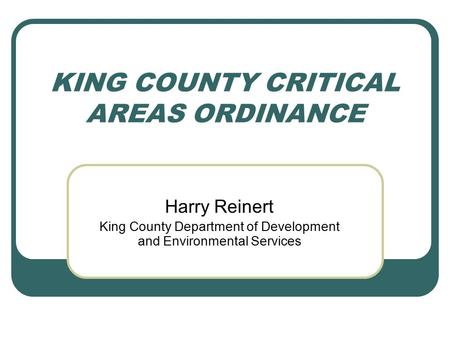 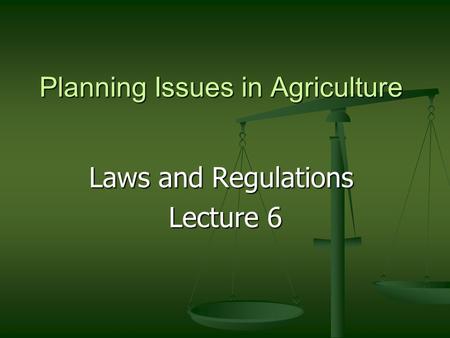 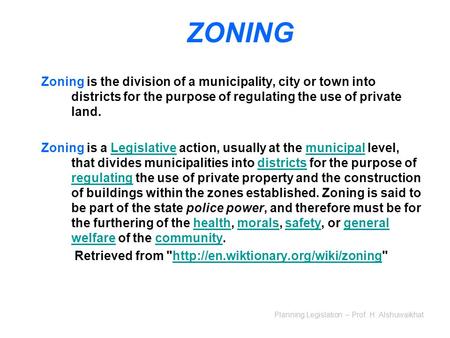 Planning Legislation – Prof. H. Alshuwaikhat ZONING Zoning is the division of a municipality, city or town into districts for the purpose of regulating. 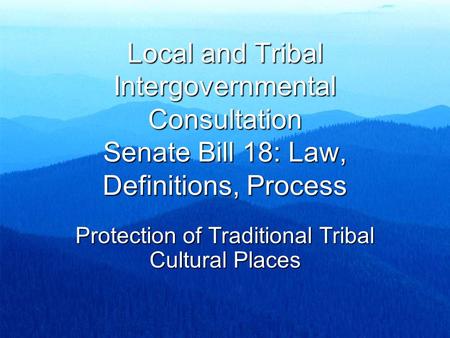 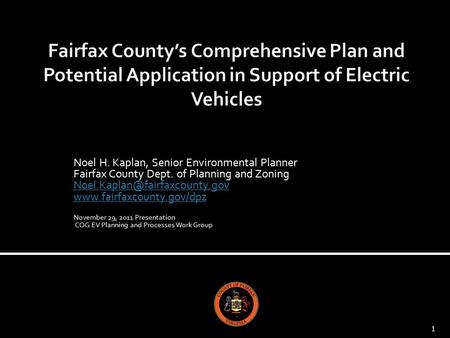 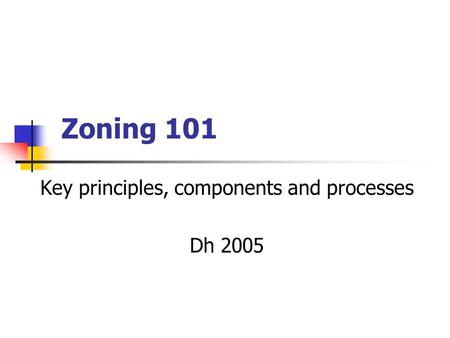 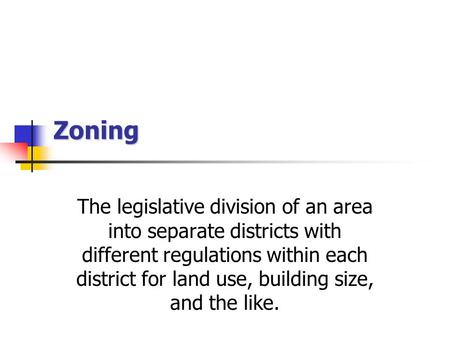