1 Elements of a Story

2 SETTING The setting is the time and location in which the story takes place.Sometimes the setting is very important. Other times, it is not. There are five different aspects of the setting to consider.

3 Five Aspects of Setting
a. Place geographical location where the action of the story is taking place

4 Five Aspects of Setting
b. Time when the story is taking place (historical period, time of day, season of year, etc.)

7 Five Aspects of Setting
e. Mood or Atmosphere the feeling created at the beginning of the story (happy, cheerful, scary, dark, etc.)

8 PLOT The plot is the way the writer arranges the sequence of events in the story. Generally, stories have a beginning, a middle, and an end. There are five important parts of the plot.

9 Five Parts of Plot 1. Introduction (Exposition)
the beginning of the story where the setting, characters, and conflict are introduced

10 Five Parts of Plot 2. Rising Action
the events that occur as the story becomes more complicated and the conflict is revealed

11 Five Parts of Plot 3. Climax
the highest point of interest and the turning point in the story

12 Five Parts of Plot 4. Falling Action
after the climax as the events and the characters begin to resolve themselves, the conflict is resolved

13 Five Parts of Plot 5. Denouement (Resolution)
the final outcome or untangling of events in the story

14 CONFLICT Every story must have a conflict. Without a conflict, there is no plot. It is the opposition of forces that makes the plot move. A conflict is opposition to the main character. There may be more than one conflict in a story. Usually, there is one major conflict. There are two types of conflict and four kinds of conflict.

15 Two Types of Conflict 1. External
a struggle between a character and an outside force (another character, nature, society, fate, etc.)

16 Two Types of Conflict 2. Internal
a struggle between a character and him or herself within the character’s mind

17 Four Kinds of Conflict 1. Man vs. Man
the leading character struggles against another character, a force of nature, or animals

18 Four Kinds of Conflict 2. Man vs. Circumstances
the leading character struggles against fate or the circumstances of life facing him or her

19 Four Kinds of Conflict 3. Man vs. Society
the leading character struggles against ideas, practices, or customs of society

20 Four Kinds of Conflict 4. Man vs. Him or Herself
the leading character struggles against him or herself (within his or her soul, with his or her ideas of right and wrong, against physical limitations, etc.)

22 Two Types of Characters
a. Protagonist the main character in the story, almost all events are somehow connected to the protagonist

23 Two Types of Characters
b. Antagonist the person in conflict with the main character

24 Three States of Characters
1. Individual a character with a round, many-sided, complex personality

25 Three States of Characters
2. Developing a character who changes, for better or worse, throughout the story

27 POINT OF VIEW The point of view is the angle from which the story is told. There are three main types of point of view we will see.

28 Three Types of Point of View
1. First Person the story is told by one character; the reader sees the story through the character’s eyes as the character experiences it; and the reader only knows how the narrator feels about things

29 Three Types of Point of View
2. Stream of Consciousness the story is told so the reader feels as if he or she is inside the mind of one of the characters and knows all the character’s thoughts and reactions

30 Three Types of Point of View
3. Omniscient the story is told from a narrator who is not in the story, and the narrator describes all the characters and the action from the outside a. Limited – only knows what one character knows b. Objective – knows everything going on but offers no opinions, reader must form his or her own opinions

32 THEME Examples? Don’t judge a book by its cover.
What goes around comes around. Let sleeping dogs lie. Don’t make a mountain out of a molehill. 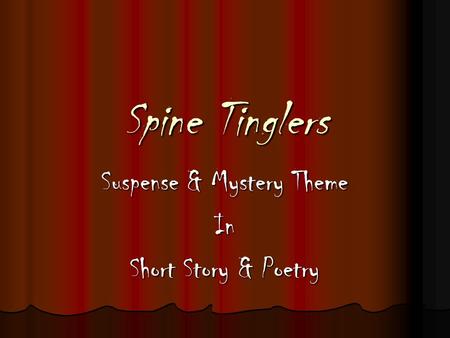