3 Background Born: February 1, 1902 in Joplin, Missouri
Born to the parents of Carrie and James Hughes When his parents divorced he was sent to live with his grandmother: Mary Langston.

5 Langston’s Beginning In the 8th grade was when Langston’s writing really began. He wrote his first verse of poetry and was named the class poet. Later during Langston’s high school life he became the publisher for the school newspaper the Monthly. His English teacher inspired by his writing introduced Langston to poets: Carl Sandburg, Walt Whitman, and Paul Dunbar which became his inspiration.

6 Visits with Langston’s Father
During the summer going into his senior year, Langston went to visit his father. Not getting along with his father during his whole summer. Langston’s visit contributed to his maturity as a writer and as a man.

7 Visits with Langston’s Father
After Langston graduated from high school he went to visit his father again to ask him to help pay for college. On the train ride to Toluca, Mexico he began to ponder the past and future. Finally making all his thoughts into his poem “The Negro Speaks of Rivers”. After the visit with his father, his father agreed to pay for college as long as he studied engineering.

8 College Life When Langston went to college he only stayed in college for a year, while finding Harlem. After discovering Harlem, Langston’s writing became inspired by everything around him. Langston first volume autobiography “The Big Sea” gave a crucial 1st-person point of view of the era. Langston’s writing increased tremendously and he wrote ideas down when ever one came to his mind.

9 Odd Jobs Langston couldn’t just start out with a career in writing and become rich and famous. Langston had to work many different jobs to just make it by. Assistant Cook Launderer Busboy Traveled to Africa and Europe working as a Seaman

10 Background to Langston’s Poetry
Growing up with racial pride Langston expressed a great deal of putting his own life experiences and common experiences of black America into his poetry. He wanted to show people the stories of his people in ways that reflected their actual culture, including their suffering, their love of music, laughter, and language. Langston used rhythms of the jazz and blues, which set his music apart from all other writers. This allowed Langston to develop a new rhythmic free verse. With his style of writing and the sharing of his ideas Langston’s second volume of poetry: “Fine Clothes to the Jew”, wasn’t liked by the public.

12 Not Just a Poet Children’s Books Autobiographies Plays Lyrics
Even though Langston did express himself through all his work, he did follow guidelines when writing plays and lyrics for other people.

13 Towards the End Langston had always had an issue with money, but after writing lyrics for the Broadway musical “Street Scene”, he was finally able to by a house in Harlem. Langston became recognized for his poetry in his later years and was named “Poet Laureate of the Negro Race”.

14 Langston Hughes Death With all that he has accomplished Langston was said to be one of the most original poets of all African American poets. On May 22, 1967 Langston Hughes died after having abdominal surgery. He was loved and missed by all who knew him and who read his work.

15 They send me to eat in the kitchen When company comes, But I laugh,
I, Too, Sing America By Langston Hughes I, too, sing America. I am the darker brother. They send me to eat in the kitchen When company comes, But I laugh, And eat well, And grow strong. Tomorrow, I'll be at the table When company comes. Nobody'll dare Say to me, "Eat in the kitchen," Then. Besides, They'll see how beautiful I am And be ashamed-- I, too, am America. I Hear America Singing By Walt Whitman I hear America singing, the varied carols I hear, Those of mechanics, each one singing his as it should be blithe and strong, The carpenter singing his as he measures his plank or beam, The mason singing his as he makes ready for work, or leaves off work, The boatman singing what belongs to him in his boat, the deckhand singing on the steamboat deck, The shoemaker singing as he sits on his bench, the hatter singing as he stands, The wood-cutter’s song, the ploughboy’s on his way in the morning, or at noon intermission or at sundown, The delicious singing of the mother, or of the young wife at work, or of the girl sewing or washing, Each singing what belongs to him or her and to none else, The day what belongs to the day—at night the party of young fellows, robust, friendly, Singing with open mouths their strong melodious songs.

16 --Dream Variations To fling my arms wide In some place of the sun, To whirl and to dance Till the white day is done. Then rest at cool evening Beneath a tall tree While night comes on gently, Dark like me- That is my dream! To fling my arms wide In the face of the sun, Dance! Whirl! Whirl! Till the quick day is done. Rest at pale evening... A tall, slim tree... Night coming tenderly Black like me. --Harlem (A Dream Deferred) What happens to a dream deferred? Does it dry up like a raisin in the sun? Or fester like a sore— And then run? Does it stink like rotten meat? Or crust and sugar over— like a syrupy sweet? Maybe it just sags like a heavy load. Or does it explode?

17 -- Negro Speaks of Rivers
I've known rivers: I've known rivers ancient as the world and older than the flow of human blood in human veins. My soul has grown deep like the rivers. I bathed in the Euphrates when dawns were young. I built my hut near the Congo and it lulled me to sleep. I looked upon the Nile and raised the pyramids above it. I heard the singing of the Mississippi when Abe Lincoln went down to New Orleans, and I've seen its muddy bosom turn all golden in the sunset. Ancient, dusky rivers.

18 -- Theme for English B (I hear New York, too.) Me--who?
Well, I like to eat, sleep, drink, and be in love. I like to work, read, learn, and understand life. I like a pipe for a Christmas present, or records--Bessie, bop, or Bach. I guess being colored doesn't make me not like the same things other folks like who are other races. So will my page be colored that I write? Being me, it will not be white. But it will be a part of you, instructor. You are white-- yet a part of me, as I am a part of you. That's American. Sometimes perhaps you don't want to be a part of me. Nor do I often want to be a part of you. But we are, that's true! As I learn from you, I guess you learn from me-- although you're older--and white-- and somewhat more free. This is my page for English B. The instructor said, Go home and write a page tonight. And let that page come out of you-- Then, it will be true. I wonder if it's that simple? I am twenty-two, colored, born in Winston-Salem. I went to school there, then Durham, then here to this college on the hill above Harlem. I am the only colored student in my class. The steps from the hill lead down into Harlem, through a park, then I cross St. Nicholas, Eighth Avenue, Seventh, and I come to the Y, the Harlem Branch Y, where I take the elevator up to my room, sit down, and write this page: It's not easy to know what is true for you or me at twenty-two, my age. But I guess I'm what I feel and see and hear, Harlem, I hear you: hear you, hear me--we two--you, me, talk on this page. 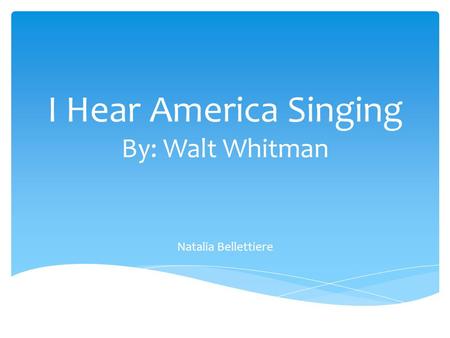 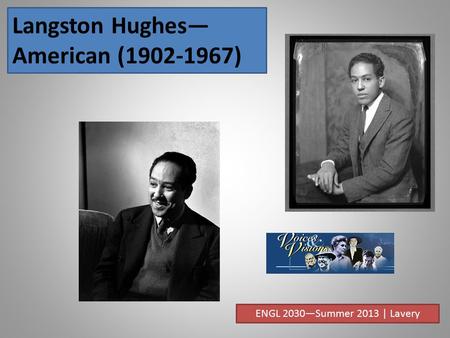 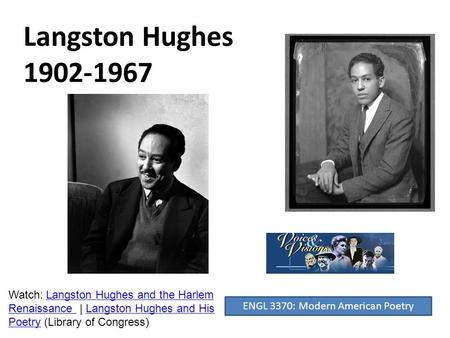 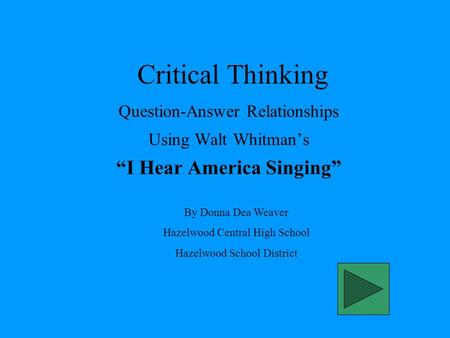 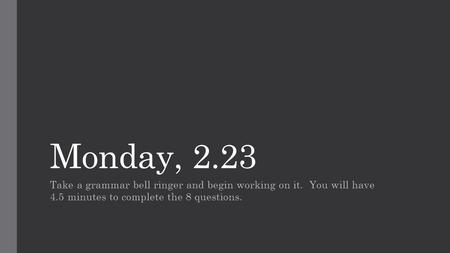 Monday, 2.23 Take a grammar bell ringer and begin working on it. You will have 4.5 minutes to complete the 8 questions. 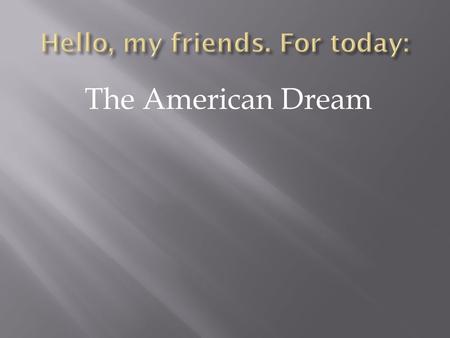 The American Dream.  I Hear America Singing by Walt Whitman I hear America singing, the varied carols I hear, Those of mechanics, each one singing. 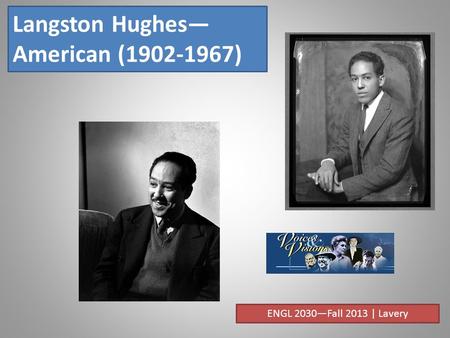 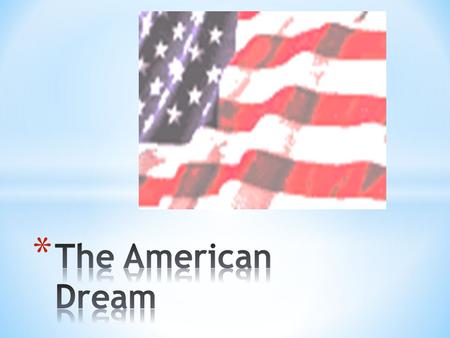 I hear America singing, the varied carols I hear; Those of mechanics—each one singing his, as it should be, blithe and strong; The carpenter singing his, 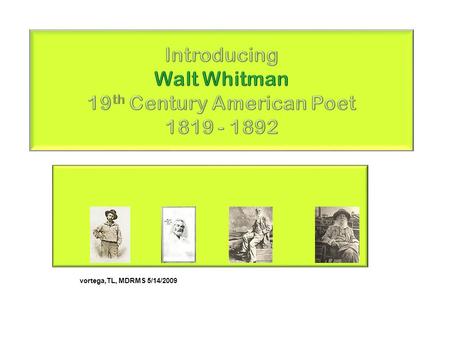