3 13 British Colonies Regions
The 13 British colonies can be categorized in 3 regions: New England, Middle and Southern New England colonial region: Massachusetts, Rhode Island, New Hampshire and Connecticut The rocky soil and hilly land of New England made it suitable only for small, family farms The growing season was short due to the long, cold winters People in New England worked on small farms, or in the lumber, fishing or shipbuilding industries Settlers first came for religious freedom.

5 13 British Colonies Regions
The Southern Colonies included: Maryland, Virginia, North Carolina, South Carolina and Georgia Fertile soil and a warm, moist climate combined to make an ideal setting for growing crops– especially cash crops (tobacco, rice, indigo, etc.) Wealthy colonists in the Southern Colonies established large farms (plantations) where only 1 or 2 cash crops were grown The region had broad rivers and vast wetlands that merged with the sea. Indentured servants and African slaves worked in the fields to sow and harvest the cash crops. (Keep in mind there were slaves in ALL of the colonial regions at this time.) In addition, debtors were able to start a new life in Georgia.

6 Focus on 6… Rather than studying the specific details of ALL 13 of the colonies, we are going to focus on 6 They will be introduced in the order they were founded

7 Virginia (southern colony)
began as the early settlement of Jamestown the success of Jamestown, and later Virginia, was due in large part to tobacco (“brown gold”) the first African slaves were brought to Jamestown in (later there would be slavery in ALL of the 13 colonies– even the New England colonies) the first representative government (land-owning white men could elect representatives to run the government) was founded in Virginia: the House of Burgesses the famous colonial city of Williamsburg was the capital of the Virginia colony

8 Massachusetts (New England colony)
began as the Plymouth settlement in 1620 founded by Puritans (the Pilgrims were a type of Puritan)– who were seeking to practice their religion freely (they wanted to purify the Church of England) Ironically, Massachusetts did not allow religious freedom– the Puritan church was the only allowed church Settlers unhappy with Massachusetts broke off to form Rhode Island and Connecticut the most famous colonial city in Massachusetts: Boston Colonial Boston

9 New York (Middle colony)
this colony was originally founded by the Dutch (people from the Netherlands) in 1624 when the Dutch settled it, they named it New Netherland and its largest city was called New Amsterdam in 1664, the English took over (without having to fire a shot, even though they were prepared to do so) and promptly renamed the colony New York (after a place in England) New York colony was home to people of mainly Dutch and English background AND people of various faiths Colonial shipbuilding– port city of New York

11 Pennsylvania (Middle colony) founded by William Penn in 1682
the King of England owed a debt to Penn’s father AND the King disliked Penn because he was not a member of the Church of England– but was a member of the Society of Friends (or Quakers) Quakers believed in treating all people fairly; they refused to bow before the king, pay taxes to the Church of England, or fight in wars Penn advertised his colony as a place where people of any faith could practice freely– including Quakers Penn named his capital city Philadelphia– Greek for “city of brotherly love” Philadelphia became one of the most famous colonial cities– especially because it is where the Declaration of Independence was written Colonial Philadelphia

12 Georgia (Southern colony) founded in 1733 by James Oglethorpe
the Georgia colony was founded to 1) provide a place for debtors to go, rather than to jail (debtor = someone who owes money) AND 2) to provide a geographic buffer against the Spanish colony of Florida Oglethorpe tried to impose rules such as no drinking and no slaves– but the people of Georgia rejected these ideas the Georgia colony became home to people of a variety of faiths Early colonial map of Georgia 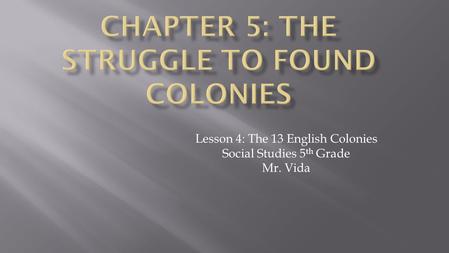 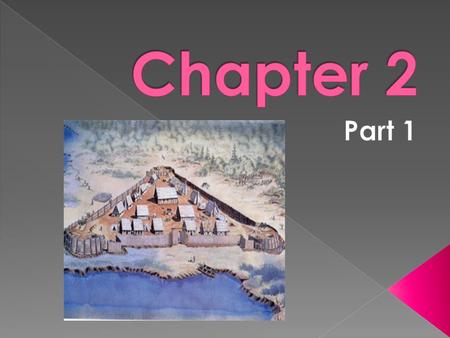 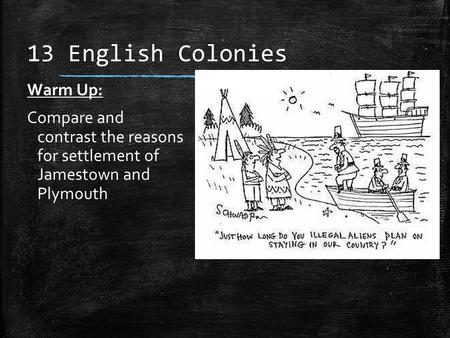 13 English Colonies Warm Up: Compare and contrast the reasons for settlement of Jamestown and Plymouth. 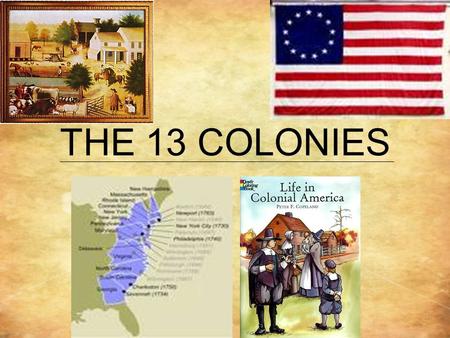