4 Christianity Founder How many gods? Holy writings Beliefs Types Where
Jesus Christ, who was crucified around A.D. 30 in Jerusalem. How many gods? One Holy writings The Bible Beliefs Jesus taught love of God and neighbor and a concern for justice. Types In 1054 Christians separated into the Eastern Orthodox Church and the Roman Catholic Church. In the early 1500s the major Protestant groups (Lutheran, Presbyterian, and Episcopalian) came into being. A variety of other groups have since developed. Where Through its mission work, Christianity has spread to most parts of the globe.

5 Islam Founder How many gods? Holy writings Beliefs Types Where
Muhammad, who was born in A.D. 570 at Mecca, in Saudi Arabia. How many gods? One, Allah Holy writings The Koran (Qu’ran) Beliefs The Five Pillars, or main duties, are: profession of faith; prayer 5 times a day; charitable giving; fasting during the month of Ramadan; and pilgrimage to Mecca at least once. Types Almost 90% of Muslims are Sunnis. Shiites are the second-largest group. The Shiites split from the Sunnis in 632 when Muhammad died. Where Islam is the main religion of the Middle East, Asia, and the north of Africa.

6 Hinduism Founder How many gods? Holy writings Beliefs Types Where
Hinduism has no founder. The oldest religion, it may date to prehistoric times. How many gods? Many (all gods and goddesses are considered different forms of one Supreme Being.) Holy writings The most ancient are the four Vedas. Beliefs Reincarnation states that all living things are caught in a cycle of death and rebirth. Life is ruled by the laws of karma, in which rebirth depends on moral behavior Types No single belief system unites Hindus. A Hindu can believe in only one god, in many, or in none. Where Hinduism is practiced by more than 80% of India's population.

7 Buddhism Founder How many gods? Holy writings Beliefs Types Where
Siddhartha Gautama, called the Buddha, in the 4th or 5th century B.C. in India. How many gods? None, but there are enlightened beings (Buddhas) Holy writings The most important are the Tripitaka, the Mahayana Sutras, Tantra, and Zen texts Beliefs The Four Noble Truths: (1) all beings suffer; (2) desire—for possessions, power, and so on—causes suffering; (3) desire can be overcome; and (4) the path that leads away from desire is the Eightfold Path (the Middle Way). Types Theravada (Way of the Elders) and Mahayana (Greater Vehicle) are the two main types. Where Buddhism is the main religion in many Asian countries.

8 Judaism Founder How many gods? Holy writings Beliefs Types Where
The Hebrew leader Abraham founded Judaism around 2000 B.C. Moses gave the Jews the Torah around 1250 B.C. How many gods? One Holy writings The most important are the Torah, or the first five books of Moses. Others include Judaism's oral tradition, the written form of which is known as the Talmud. Beliefs Jews believe in the laws of God and the words of the prophets. In Judaism, however, actions are more important than beliefs. Types The three main types are Orthodox, Conservative, and Reform. Conservative Jews follow most traditional practices, but less strictly than the Orthodox. Reform Jews are the least traditional. Where There are large Jewish populations in Israel and the U.S.

9 Other Religions Baha‘i: a religion founded in Iran in 1863 by Husayn عAlī (called Bahaullah) teaching the essential worth of all religions, the unity of all races, and the equality of the sexes. Confucianism: the system of ethics, education, and statesmanship taught by Confucius, a Chinese philosopher and his disciples, stressing love for humanity, ancestor worship, reverence for parents, and harmony in thought and conduct. Jainism: a dualistic religion founded in the 6th century b.c. as a revolt against current Hinduism and emphasizing the perfectibility of human nature and liberation of the soul, esp. through asceticism and nonviolence toward all living creatures. Shinto: the native religion of Japan, primarily a system of nature and ancestor worship.

10 Other Religions (cont.)
Sikhism: a monotheistic religion, founded in the Punjab c1500 by the guru Nanak, that refuses to recognize the Hindu caste system or the Brahmanical priesthood and forbids magic, idolatry, and pilgrimages. Taoism: the philosophical system evolved by Lao-tzu and Chuang-tzu, advocating a life of complete simplicity and naturalness and of noninterference with the course of natural events, in order to attain a happy existence in harmony with the Tao. Zoroastrianism: an Iranian religion, founded c600b.c.by Zoroaster, the principal beliefs of which are in the existence of a supreme deity, Ahura Mazda, and in a cosmic struggle between a spirit of good, Spenta Mainyu, and a spirit of evil, Angra Mainyu. Pre-Islam 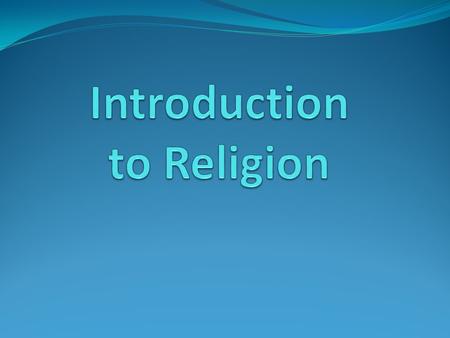 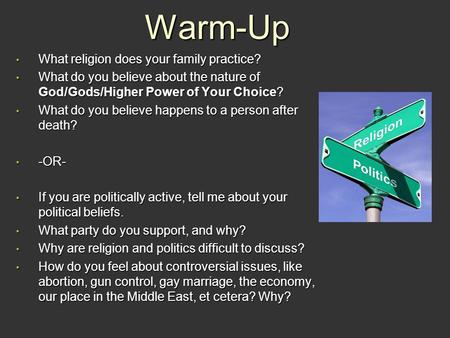