Presentation on theme: "Tuesday January 15, 2013 Learning Goal: I will be able to understand the types of law (civil, criminal, constitutional and military) that."— Presentation transcript:

8 Tuesday January 15, 2013 Learning Goal: I will be able to understand the types of law (civil, criminal, constitutional and military) that create the foundation of the American legal system. Bell Ringer: What makes a “good” law?

10 Why is there a Legal System? Rule of Law: All people, including politicians and other leaders, must obey the law.

12 Types of Laws There are two (2) types of law that affect Americans directly today that help maintain a peaceful and orderly society: “Criminal” Law PROTECTS SOCITY AS A WHOLE “Civil” Law

13 Other Types of Law Military Law The body of laws and rules of conduct administered by military courts for the discipline, trial, and punishment of military personnel Example: Court-Martial Constitutional Law The area of law that has to do with the subject matter and with the interpretation and construction of constitutions or that deals with the nature and organization of government. Example: Judicial Review

14 “Criminal” Law “Criminal” laws are laws that seek to prevent people from deliberately or recklessly harming each other or each other’s property.

15 Our Court System American courts operate on an “adversary” system of justice, meaning the courtroom serves as an “arena” in which lawyers for opposing sides try to present their strongest case.

16 “Criminal” Law In criminal cases, the government is always the “plaintiff”, or the party that brings the charges against the alleged criminal. The individual or group being sued is the “defendant”.

17 “Criminal” Law There are two (2) types of crimes: “Felonies” “Misdemeanors”

20 Criminal Process Once an arrest has been made by law enforcement, the suspect will be informed of his/her rights. This is a result of the 1966 Supreme Court case “Miranda v. Arizona”…

21 Criminal Process Suspects then appear before the court in a “hearing” to hear the charges against them and listen to the judge’s decision on the next step.

22 Criminal Process At an “arraignment”, suspects formally hear the charges and are asked to enter a “plea”. Plea Bargain– You will need to know this for the test! They will enter “guilty”, “not guilty”, or “no contest”…

23 Criminal Process During their criminal trial, each side will call witnesses to testify (or give answers under oath) in the case. These witnesses will also be “cross examined” by the other side.

24 Criminal Process Defendants are either found “guilty”, are “acquitted” (found “not guilty”), or the judge can declare a “hung jury” (a “mistrial” is declared by the judge)

25 Criminal Penalties Criminal penalties are designed to: Provide punishment so the criminal pays for the crime against a victim or society

26 Criminal Penalties Criminal penalties are designed to: Remove prisoners so they are not a threat to society

28 Criminal Penalties Criminal penalties are designed to: “Rehabilitate” criminals so they can reenter society and become productive members

29 “Civil” Law “Civil” laws are for disputes between people or groups of people in which no criminal laws have been broken. Since there is no threat to society, the state does not take action.

30 “Civil” Law When a civil case goes to court, it is called a “lawsuit”, which is a legal action in which a person or group sues to collect “damages” (an award of money) for some harm that is done.

32 “Civil” Law A case begins when a “complaint” is filed (a formal statement naming those involved and describing the nature of the lawsuit) Once filed, a “summons” OR SUBPOENA (YOU WILL NEED TO KNOW THIS) (a document ordering a defendant to appear) is sent by the court.

33 “Civil” Law A defendant may respond to the suit in a “pleading” (complaint and answer together). “Discovery” is the name of the process in which lawyers for the plaintiff and defendant check facts and gather evidence for the case

34 “Civil” Law In an “equity” lawsuit, issues are resolved by a judge based on the grounds of fairness. Judges often issue an “injunction” (or a court order commanding a person or group to stop a certain action)

35 Legal Protections in the U.S. Constitution Rulings in court cases are decided by written laws and precedents of earlier cases. “Stare decisis” means “let the decision stand”, or the practice of using earlier judicial rulings as a basis for deciding cases.

36 Legal Protections in the U.S. Constitution “Writ of habeas corpus” is a court order that requires police to bring a prisoner to court to plain why they are holding the person

37 Legal Protections in the U.S. Constitution “Bills of attainder” are laws that punish a person accused of a crime without a trial or a fair hearing in court.

38 Legal Protections in the U.S. Constitution “Ex post facto laws” are laws that allow a person to be punished for an action that was not against the law when it was committed..

39 Legal Protections in the U.S. Constitution “Due process” is the legal procedures established when dealing with the accused.

40 Amendment Protection Several of the amendments of the Constitution help protect the rights of the “accused”: Fourth Fifth Sixth Eighth

41 “Fourth Amendment” This amendment protects citizens from “unreasonable searches and seizures” Law enforcement must obtain a “search warrant” (signed by a judge) specifying the exact place to be searched and what objects may be seized.

42 “Fifth Amendment” This amendment protects the rights of the accused: No self incrimination Right of due process No “double jeopardy” (accused of the same crime more than once) Right to a “grand jury” (where a group of citizens determine if there is enough evidence to continue)

43 “Sixth Amendment” This amendment protects the rights of the accused by granting counsel (or a lawyer) If the accused can not afford one, the state must provide one.

44 “Eighth Amendment” This amendment protects the rights of the accused by forbidding “cruel and unusual punishments” or “excessive bail” “Bail” is a sum of money paid to court to win release while waiting for their trial.

46 Young People & the Courts Most crimes committed by juveniles are “misdemeanors” (less serious) However, juveniles do commit “felonies” (more serious).

47 Young People & the Courts The primary goal of the juvenile court is to “rehabilitate” the juvenile (or correct the behavior) rather than to punish. These courts basically handle “neglect” and “delinquency” cases

48 Young People & the Courts Many police departments have officers who try and “divert” (or steer away from the court system) these juveniles.

49 Young People & the Courts While court trials for juveniles are similar to adults, they do NOT have the right to a jury trial. The judge makes the decision.

50 Young People & the Courts The rights of juveniles were established in the 1967 “In re Gault” Supreme Court case (right to counsel, remain silent, confront witnesses etc.)

51 Young People & the Courts Unlike adult trials, the identity of juveniles is kept secret and the criminal records of these juveniles can be erased when they reach adulthood.

Download ppt "Tuesday January 15, 2013 Learning Goal: I will be able to understand the types of law (civil, criminal, constitutional and military) that." 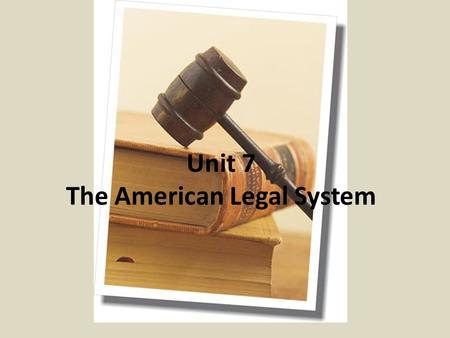