3 Routing Information Protocol (RIP)
RIP is based on Distance vector routing: RIP implement Distance vector routing with some considerations: Destination in the routing table is a network (first column defines network address) Metric(distance) is Hop count : is the number of networks that a packet encounters to reach its final destination Infinity is defined as value of 16 . Therefore, the Max limited of hops is 15 suitable for small networks (local area environments) Router sends update message to neighbors every 30 sec. If router does not receive update message from neighbor X within this limit, it assumes the link to X has failed and sets the corresponding minimum cost to 16 (infinity).

7 Initial routing tables in a small autonomous system
When a router is added to a network, it initializes a routing table for itself, using its configuration file. The table consists only the directly attached networks and the hop counts, which are initialized to 1. The next-hop field, which identifies the next router, is empty.

8 Updating Routing Table for Router A

10 Example of updating a routing table

11 Example of a domain using RIP

12 Link State Routing Each node in the domain has the entire topology of the domain. Analogous to a city map. Each node uses the same topology to create a routing table. but the routing table for each node is unique because the calculations are based on different interpretations of the topology.

13 Building Routing table
Creation link state packet (LSP) LSP is a tabular representation of the topology of the internet Every router in the same area has the same LSP After a node has prepared an LSP , it must be disseminated to all other nodes . The process is called Flooding Formation of shortest path tree for each node (router) using Dijkstra algorithm Calculation of routing table.

14 Building Routing table
Creation link state packet (LSP): LSP can carry a large amount of information such as : the node identity, list of links, sequence number,…etc. LSP are generated on two occasions: When there is a change in topology of the domain. Triggering of LSP dissemination to inform any node in the domain to update its topology On a periodic basis. The period in this case is much longer compared to distance vector routing . The timer set for periodically dissemination is in the range 1 or 2 h. It done to ensure that the old LSP is removed A longer period ensures that flooding doesn’t create much traffic on the network

15 Building Routing table
Flooding The creating node sends a copy of the LSP out of each interface A node receives an LSP compares it with the copy it has. If the newly arrived is older than one it has , it discards If it is newer the node do the following : It discards the old LSP and keep the new one It sends a copy of it out of each interface except the one from which the packet arrived.

16 Dijkstra Algorithm Calculates the shortest path between two points on a network, using a graph made up of nodes and edges. Algorithm divides the nodes into two sets: tentative and permanent. It chooses nodes, makes them tentative, examines them, and if they pass the criteria, makes them permanent.

20 Areas in an Autonomous System
Area is a collection of networks, hosts, and routers all contained within an autonomous system. Routers inside an area flood the area with routing information. Area border routers: Summarize the information about the area and send it to other routers. Backbone area [Primary area]: All the areas inside an autonomous system must be connected to the backbone. Routers in this area are called as backbone routers. This area identification number is 0. If, due to some problem, the connectivity between a backbone and an area is broken, a virtual link between routers must be created by the administration to allow continuity of the functions of the backbone as the primary area.

21 OSPF Each router should have the exact topology of the internet at every moment. From this topology, a router can calculate the shortest path between itself and each network using Dijkstra algorithm Types of Links

22 Types of Links 1. Point-to-point
Connects two routers without any other router or host in between. Directly connected routers using serial line. Only one neighbour. No need to assign a network address to this type of link The metrics are the same at the two ends

23 Types of Links 4. Virtual 2. Transient link 3. Stub
A network with several routers attached to it. Each router has many neighbours. 3. Stub A network that is connected to only one router. The data packets enter the network through this single router and leave the network through this same router. 4. Virtual When the link between two routers is broken, the administration may create a virtual link between them, using a longer path that probably goes through several routers.

24 Example of an internet & Graphical representation
Point to point : between A_D and B-E Stub: N5, N4 and N2 Transient : N1 and N3

32 OSPF Reaction to Failure If a link fails, Router sets link distance to infinity & floods the network with an update packet All routers immediately update their link database (LSP)& recalculate their shortest paths Recovery very quick NOTE: OSPF differs from RIP in that each router knows the exact topology of the network OSPF reduces routing bandwidth usage OSPF is faster than RIP. 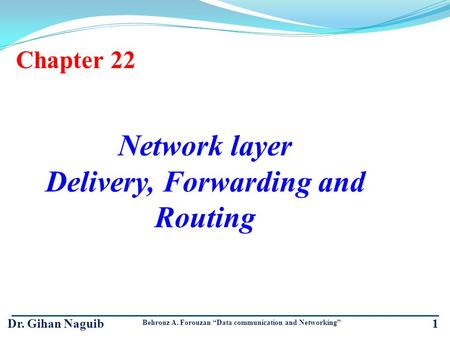 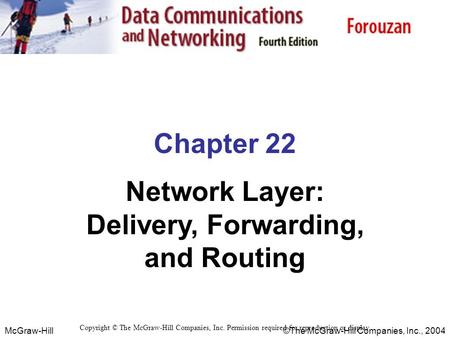 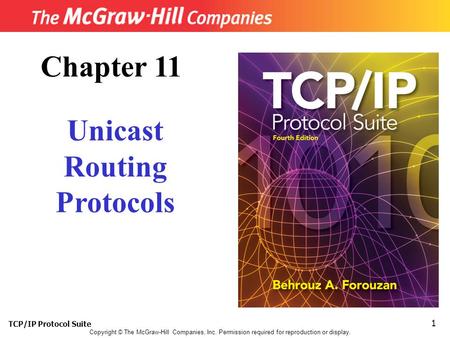 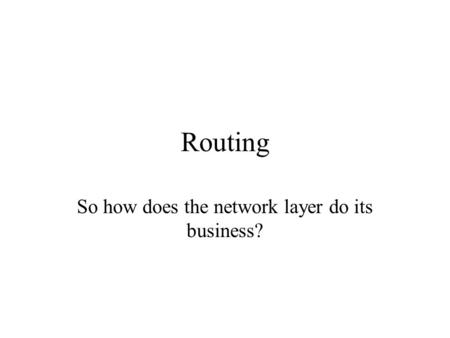 Routing So how does the network layer do its business? 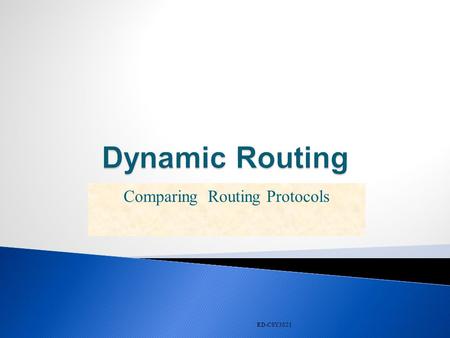 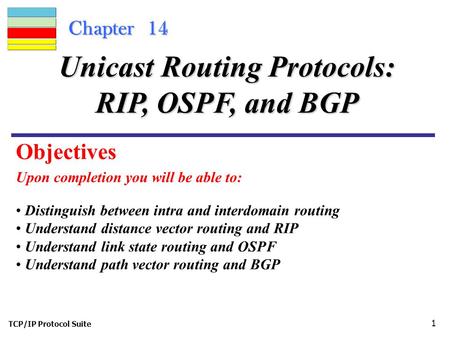 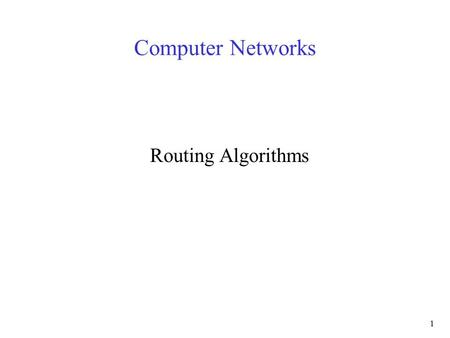 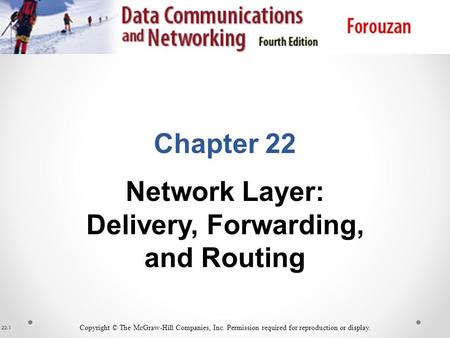 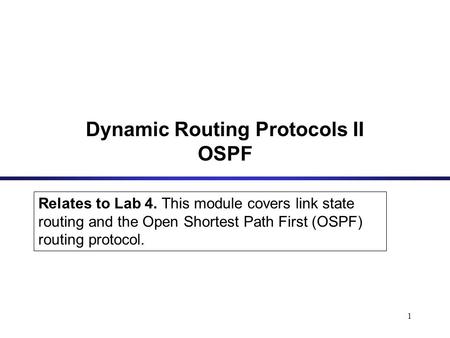 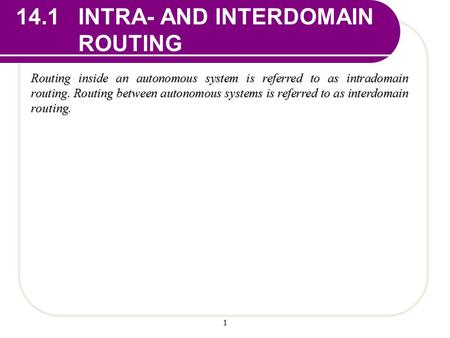 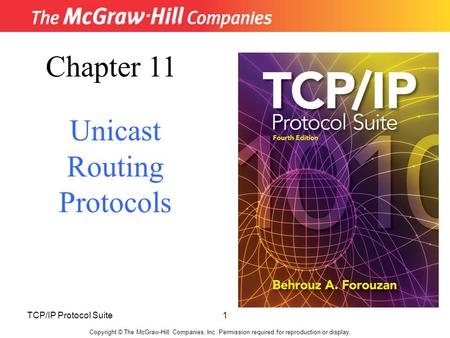 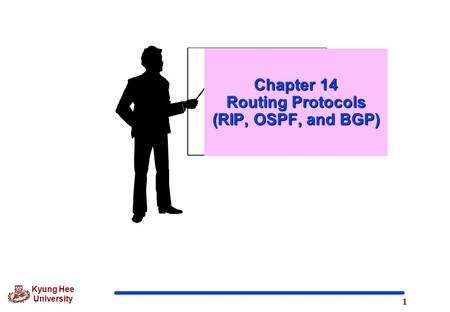 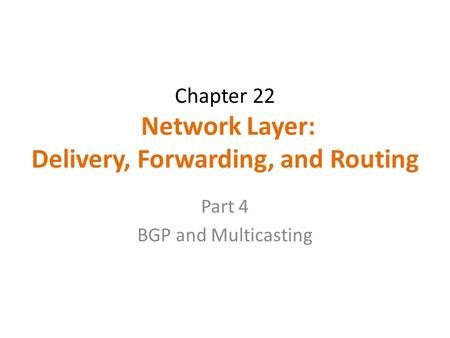 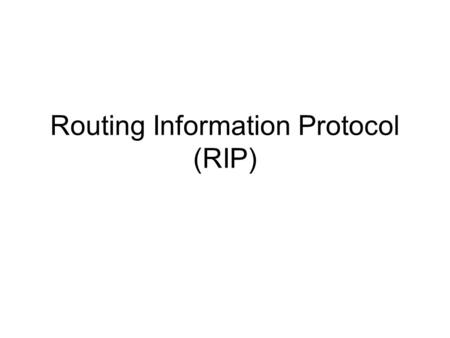 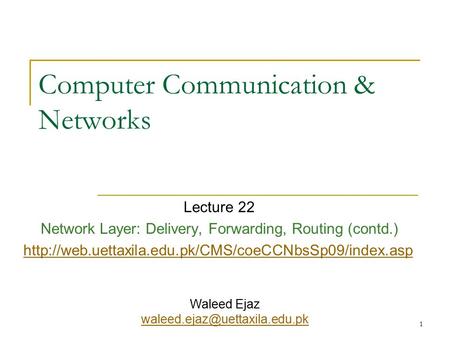 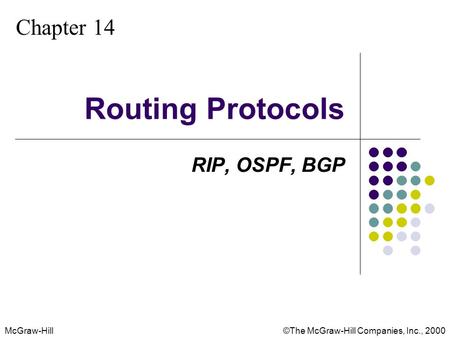 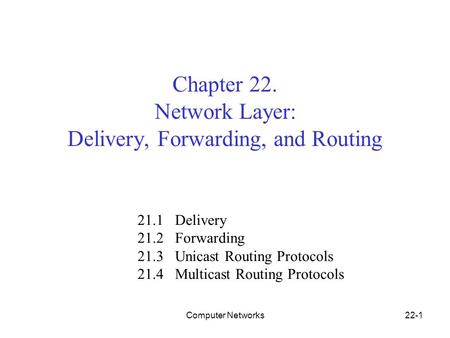 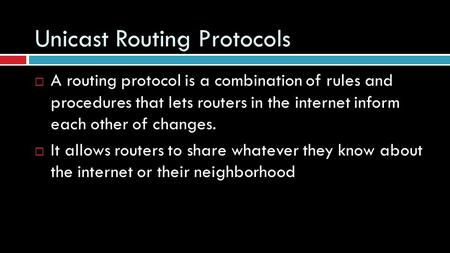 Unicast Routing Protocols  A routing protocol is a combination of rules and procedures that lets routers in the internet inform each other of changes. 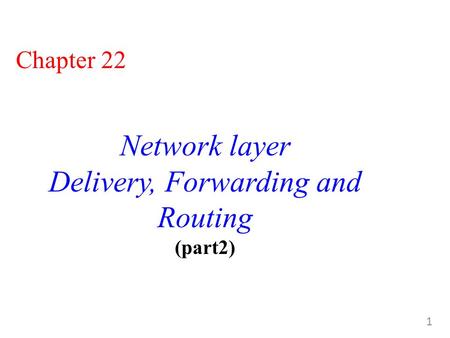 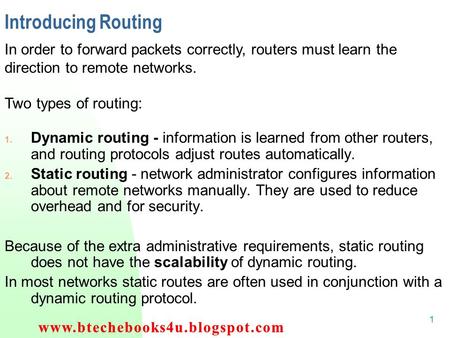