2 Definition of a transducer
Transducer is any device that converts energy in one form to another energy. The majority either convert electrical energy to mechanical displacement or convert some non- electrical physical quantity, such as temperature, sound or light to an electrical signal.

3 Functions of transducer
1. To sense the presence, magnitude, change in, and frequency of some measurand. 2. To provide an electrical output that, when appropriately processed and applied to readout device, gives accurate quantitative data about the measurand. Transducer Electrical output Measurand Excitation Measurand – refers to the quantity, property or condition which the transducer translates to an electrical signal.

4 Classification of transducers
Transducer can be classified into two major categories: A) Passive transducer: requires an external power output is a measure of some electrical parameter, such resistance, inductance and capacitance. E.g. : condenser microphone B) Self generating transducer: not require an external power, and they produce analog voltage or current when stimulated by some physical form of energy. E.g. : Thermocouple

6 Continued……….. Operating range – Operating range of the transducer should be wide, to permit its use under a wide range of measurement conditions. Repeatability – Input/output ralationship for a transducer should be predictable over a long priod of time. This ensures reliability of operation. Physical size – Transducer must have minimal weight and volume, so that its presence in the measurement system does not disturb the existing conditions.

9 6.1 RESISTIVE POSITION TRANSDUCERS
A displacement transducer uses a resistance element with a sliding contact or wiper linked to an object being monitored or measured. Thus, the resistance between slider and one end of the resistive element depends on the position of the object. (a) (b) Fig.6-1: (a) Construction of a resistive position transducer and (b) typical method

10 Continued……….. (a) (b) Consider Fig 1 (b), if the circuit is unloaded, the output voltage V0 is a certain fraction of VT, depending on the position of the wiper: or,

11 Continued……….. (6.1) This equation shows that the output voltage is directly proportional to the position of the wiper, if the resistance of the transducer is distributed uniformly along the length of travel of the wiper. EXAMPLE-1: A displacement transducer with a shaft stroke of 4 in. is used in the circuit of figure 1 (b). R1 +R2 is 1000 Ω and VT = 4 V. The wiper is 1.5 in from B. Find V0?

12 6.2 STRAIN GAUGE The strain gauge is an example
of a passive transducer that uses electric resistance variation in wires to sense the strain produced by a force on the wires. It is a very versatile detector and used for measuring weight, pressure, mechanical force, or displacement. Figure 6-2: Resistive strain gauges: wire construction

13 Continued……….. The construction of a bonded strain
gauge (see figure) shows a fine wire element looped back and forth on a mounting plate, which is usually cemented to the member undergoing stress. When a gauge is subjected to a stress, its length increases while its cross-sectional area decreases. Figure 6-2: Resistive strain gauges: wire construction

16 Since the resistance of a conductor is directly proportional to its length and inversely proportional to its cross-sectional area, the resistance of the gauge increases with strain. Strain, G is defined as elongation or compression per unit length, or: (6.4) where, L = the initial length in meters (without strain) ∆L = the change in initial length in meters

18 The constant of proportionality between stress and strain for a linear stress-strain curve is known as the modulus of elasticity of material E or called Young’s modulus. It is written as: (6.6) where, E = Young modules in kg/m2 S = the stress in kg/m2 G = the strain (no units)

20 6.4. CAPACITIVE TRANSDUCERS
A change in capacitance with changes in position of a moving element is used to provide an electrical indication. The general equation to determine the capacitance is given by (6.7) where, k = dielectric constant A = the area of the plate, in m2 εo = x in farads per meter (F/m) d = distance between two capacitive surface in m

21 Continued……….. From this equation, can be seen that the capacitance increases if the effective area is increased and it decreases if the distance between two capacitive surface (usually, spacing of parallel plates) is increased.

23 6.4.1 Rotary plate capacitor
This transducer is made up of a fixed plate called Stator and a movable plate called Rotor. When the rotor changes its position relative to the stator, the effective area between the plates is also changed and in turns, changing the capacitance.

24 6.4.2 Rectilinear capacitance transducer
It consists of a fixed cylinder and a movable cylinder. These pieces are configured so the moving piece fits inside the fixed piece but insulated from it.

25 6.4.3 Thin diaphragm Thin diaphragm is a transducer
that makes use of variation in capacitance resulting from a change in spacing between capacitive surfaces. This transducer is designed to measure pressure. The dielectric can be either air or vacuum.

26 The change in pressure may be easily detected by the variation of capacity between a fixed plate and another plate free to move as the pressure changes. The resulting variation follows the basic capacity formula: (6.8) where, A = area of one side of one plate in cm2 n = number of plates t = thickness of dielectric in cm K = dielectric constant

27 Advantages: Disadvantages: Applications:
Has excellent frequency response Can measure both static and dynamic phenomena. Simple to construct Inexpensive to produce Disadvantages: Sensitive to temperature variations. Sensitive to the possibility of erratic or distortion signals owing to long lead length Applications: As frequency modulator in RF oscillator In capacitive microphone Used as one part of an AC bridge circuit to produce an AC output signal

32 6.5.2 Thermally Resistor (Thermistor)
A thermistor is a thermally sensitive resistor that exhibits change in electrical resistance with change in temperature. Thermistor is fabricated from semiconductor material by sintering mixtures of metallic oxide, such as manganese, nickel, cobalt, copper and uranium oxides. Thermistors have Negative Temperature Coefficient (NTC), i.e. resistance decreases as temperature rises. Thermistor are available with Positive Temperature Coefficient (PTC), but PTC thermistor are seldom used for measurement since they have poor sensitivity.

34 Advantages of Thermistor:
Small size and low cost Fast response over narrow temperature range Good sensitivity in the NTC region Cold junction compensation not required due to dependence of resistance on absolute temperature. Contact and lead resistance problems not encountered due to large resistance

38 6.6 Photoelectric Transducer
Photoelectric devices Can be categorized as: photoemissive, photoconductive, or photovoltaic. No. Types Characteristics 1. Photoemmisive radiation falling into a cathode causes electrons to be emitted from cathode surface. 2. Photoconductive the resistance of a material is changed when it’s illuminated. 3. Photovoltaic Generate an output voltage proportional to radiation intensity 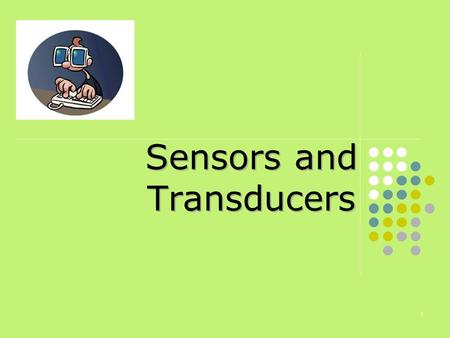 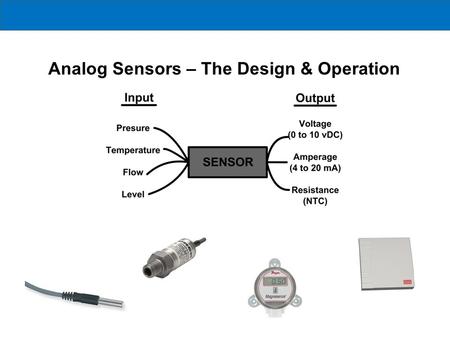 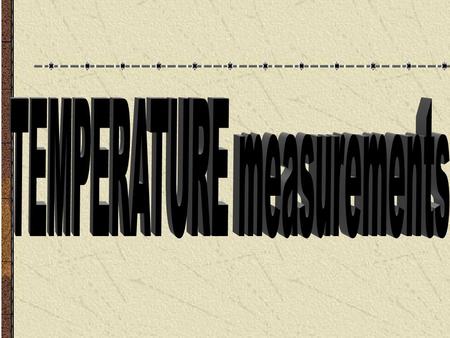 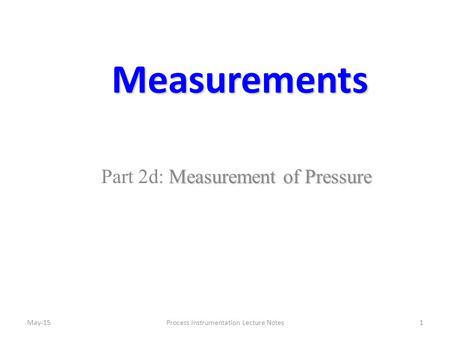 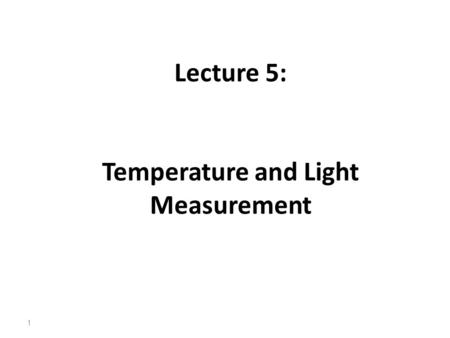 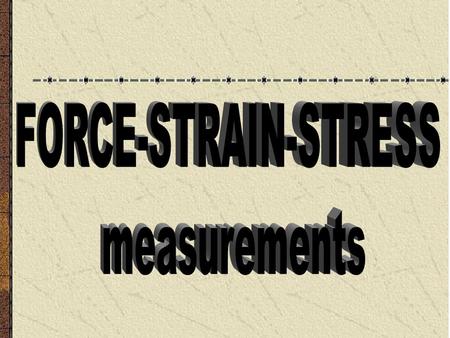 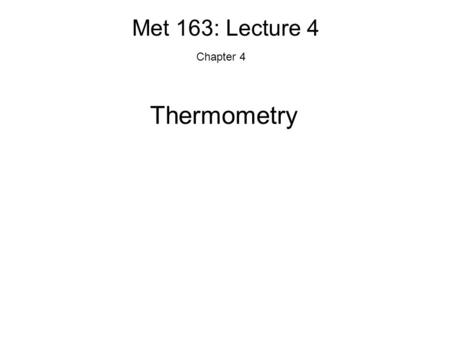 Met 163: Lecture 4 Chapter 4 Thermometry. Thermoelectric Sensors The junction of two dissimilar metals forms a thermocouple. When the two junctions are. 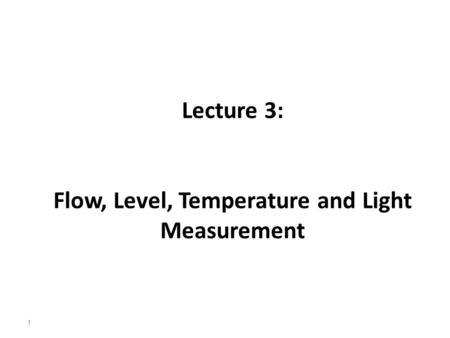 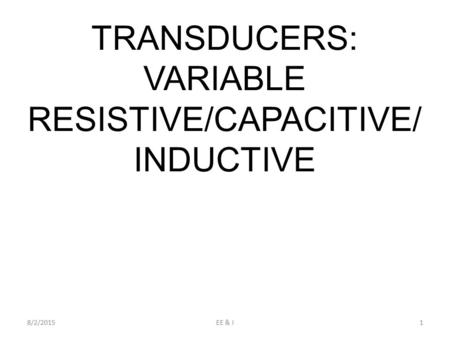 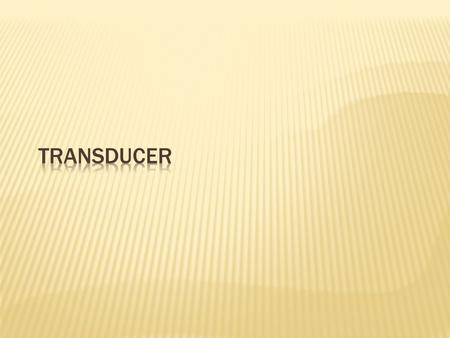 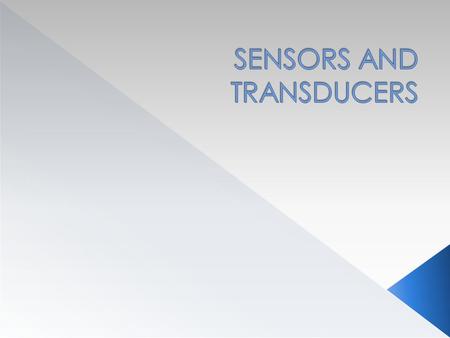 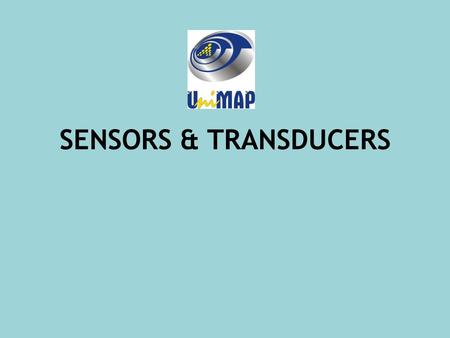 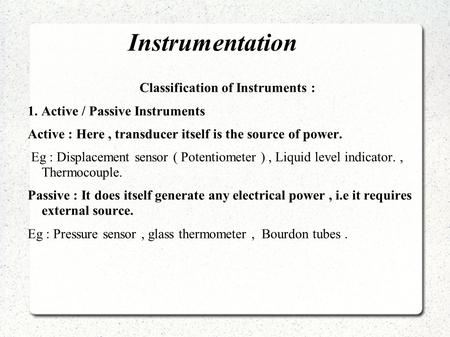 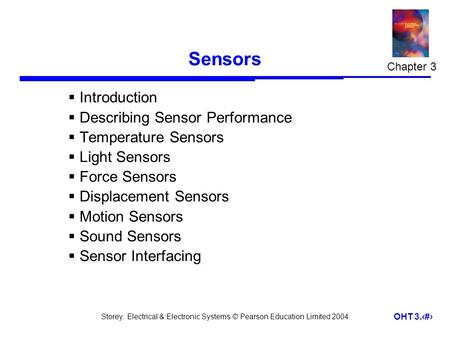 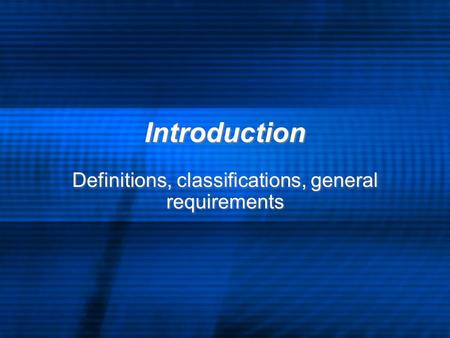 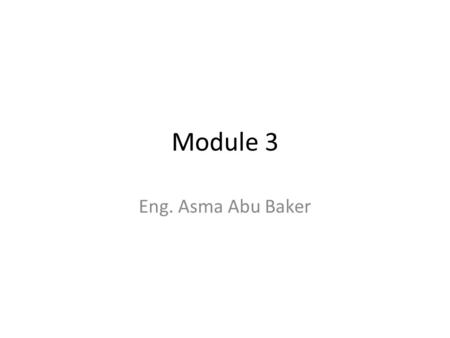 Module 3 Eng. Asma Abu Baker. Introduction One of the most important uses of instruments or measuring devices is in the field of process control. If you. 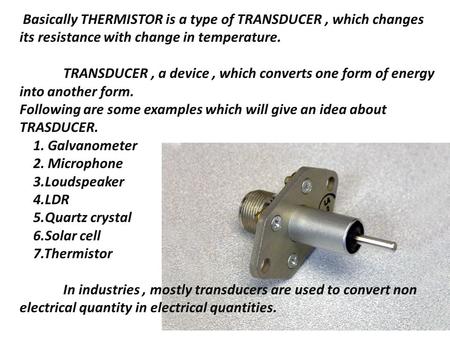 Basically THERMISTOR is a type of TRANSDUCER, which changes its resistance with change in temperature. TRANSDUCER, a device, which converts one form of. 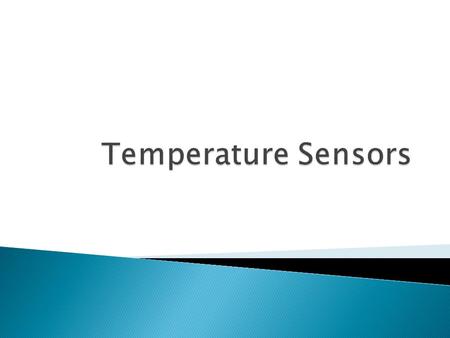 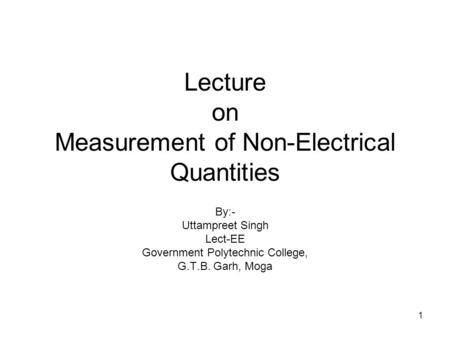 Lecture on Measurement of Non-Electrical Quantities 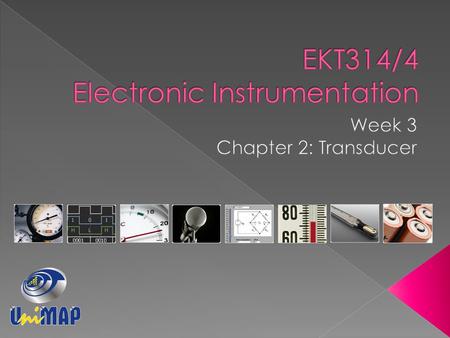