thinking hats Six of Prepared by Eman A. Al Abdullah ©

2 Six hats of thinking : a way of helping us
to think more effectively about problems and situations. Not real hats, but idea invented by Edward De Bono, expert on management and psychology. De Bono noticed that meetings often waste time with arguments: people take a certain opinion or position, and defend them to the death. Others criticize and discussion goes nowhere. E.g. someone suggests a new idea, and others say it’s impossible. Eman Al Abdullah 2007

3 The 6 hats = way of making discussions more constructive and useful.
In a normal meeting, if someone doesn’t support an idea it is easy for them not to look for positive sides - 6 hats technique challenges participants to see all sides. Some people see the negative side of everything; the 6 hats technique offers them the opportunity to think like this, but challenges them to think in other ways as well. The six hats represent six modes of thinking and are directions to think rather than labels for thinking . Eman Al Abdullah 2007

5 While wearing the white hat we ignore arguments and proposals :
We examine the facts , figures and information that we have We identify: what information we don’t have , and how we might get it . “I think we need a white hat thinking at this point … “* Means : Let’s drop the arguments and proposals , and look at the data base . Eman Al Abdullah 2007

8 What questions can we ask while wearing the green hat ?
* Are there any alternatives which we haven’t thought about ? * Could we do this in a different way ? * Could there be another explanation ? Eman Al Abdullah 2007

10 What can we say while wearing the yellow hat ? * That might work if we
changed the arrangements of the desks . * If we are to pay for each and every destroyed thing in the classroom, everyone would be more careful . Eman Al Abdullah 2007

11 When you wear the black hat
you look at all the bad points of the decision. Look at it cautiously and defensively . The black hat is the most used one, and perhaps the most valuable one, because mistakes can be disastrous . At the same time , it is very easy to overuse the black hat: It is easy to kill creative ideas by being negative too early. Black hat must always be logical ( must explain why ) Eman Al Abdullah 2007

12 What can we say while wearing the black hat ?
* The regulations do not allow us to do that . * We do not have enough teachers to do that . * When we tried harder exams pupils failed to pass them . * This teacher has no experience in the field . Eman Al Abdullah 2007

13 The red hat gives full permission to a thinker
to put forward his or her feelings on the subject at the moment . Try to think how other people will react emotionally . Try to understand the responses of people who do not fully know your reasoning . Red hat thinking lets people put forward their feelings without the need to apologize, explain them or try to justify them ! Eman Al Abdullah 2007

14 What can we say while wearing the red hat ?
* This is what I feel about the test . * My feeling is that it will not work . * I don’t like the way this is being done . * My intuition tells me that pupils will not like it . Eman Al Abdullah 2007

15 The blue hat is the thinking overview or process control hat .
It looks not at the subject itself but at the thinking about the subject. It is suggesting next step for thinking . Asking for summaries , conclusions and decisions . Eman Al Abdullah 2007

16 What can we say while wearing the blue hat ?
* We have spent far too much time looking for someone to blame * Could we have a summary of your views ? * I think we should take a look at the priorities . * I suggest we try some green hat thinking to get some new ideas . Eman Al Abdullah 2007

18 We can use the Six Hats of Thinking in almost any problem solving activity
that you might encounter in the classroom ( or in life in general ! ) Students talking while others are talking or teaching . State the facts . - Students are talking when the teacher is talking . - There is noise that others are distracted or can’t hear . - Students don’t know what to do after the teacher has given directions. Eman Al Abdullah 2007

19 Positives of the situation are examined .
State the emotions . - The teacher feels offended. - Students are frustrated because they can’t hear directions . Negative aspects . - Time is wasted . - Chaos in the classroom . Positives of the situation are examined . - Everyone gets to say what is in their mind . - It can be fun . - Not just the “ smart “ kids get to speak. Eman Al Abdullah 2007

20 Creative ideas that come with seeing the problem in a new light .
-The teacher will be more aware of the amount of time that she/ he “ talks “ . - Students will think about whether their comment will interfere with other people’s learning. Sum up what is learned. - The teacher needs to involve all students in discussion. - The teacher needs to realize that some students need “ think time “ before they are ready to contribute to a discussion. -Students now realize that when they talk when others are talking it makes the person talking feel like a fool or unappreciated. Eman Al Abdullah 2007

24 Thanks for coming and participating . Eman Al Abdullah 2007 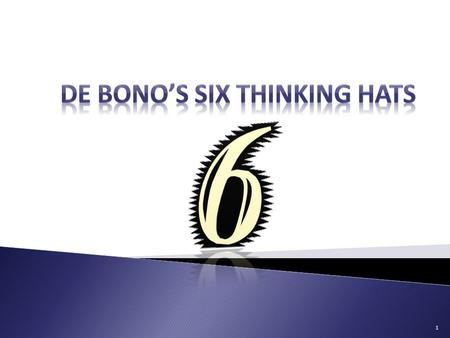 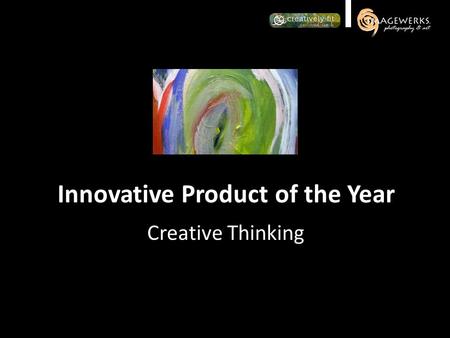 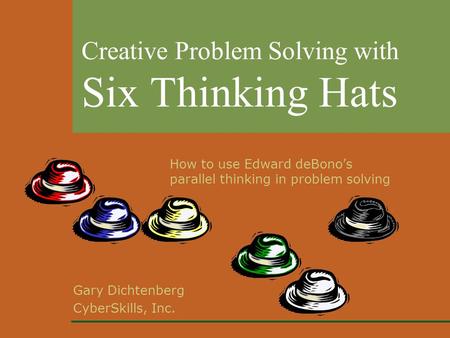 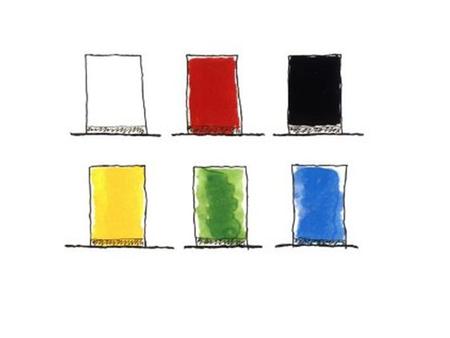 Six Thinking Hats From the part to the whole From the different/unique to the common From analysis to synthesis. 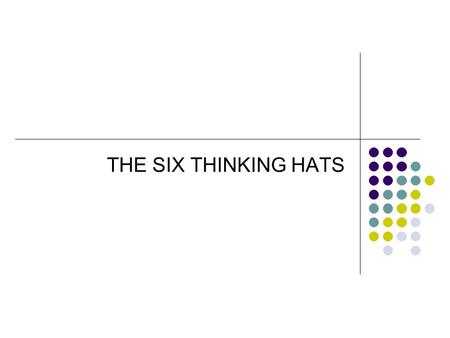 THE SIX THINKING HATS. SIX IMAGINARY THINKING HATS Only one is used at a time. When that hat is used then everyone in the group wears the same hats. This. 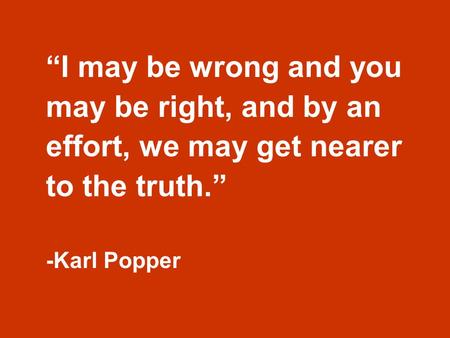 “I may be wrong and you may be right, and by an effort, we may get nearer to the truth.” -Karl Popper. 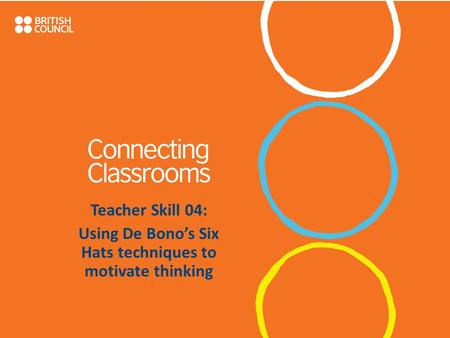 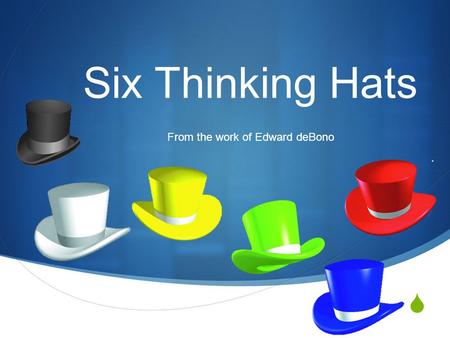 From the work of Edward deBono 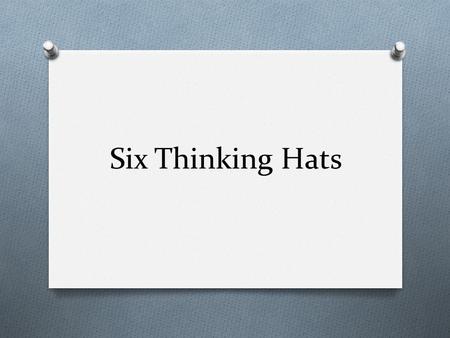 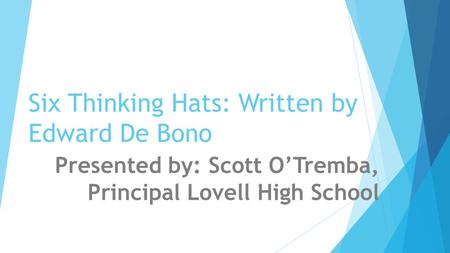 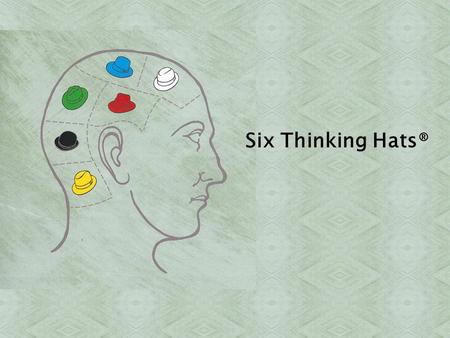 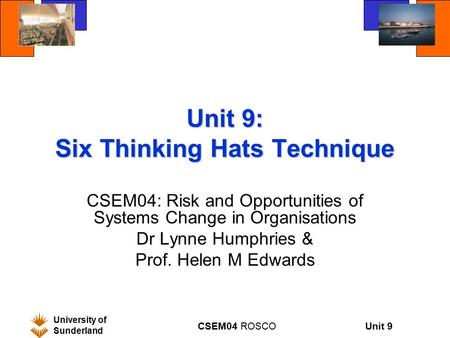 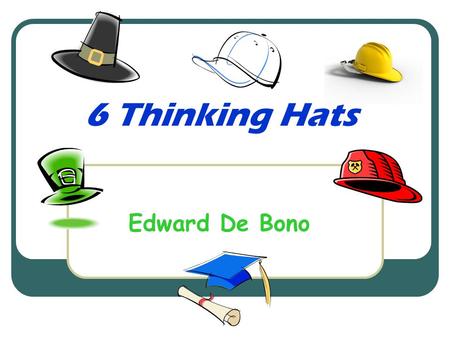 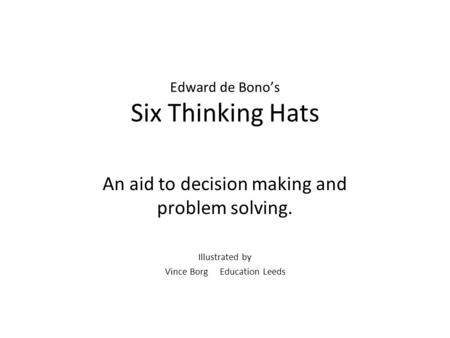 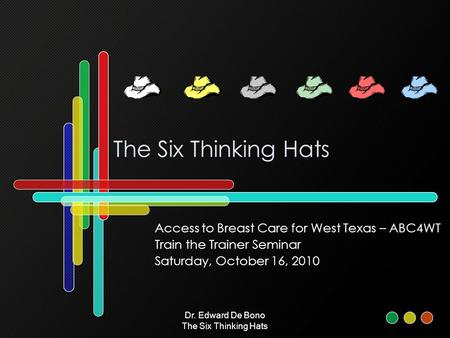 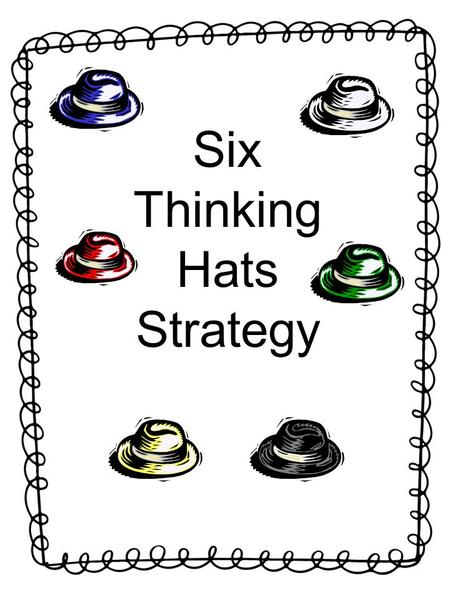 Six Thinking Hats Strategy. How do we look at a problem or situation from different perspectives to dig deeper into a character/story? 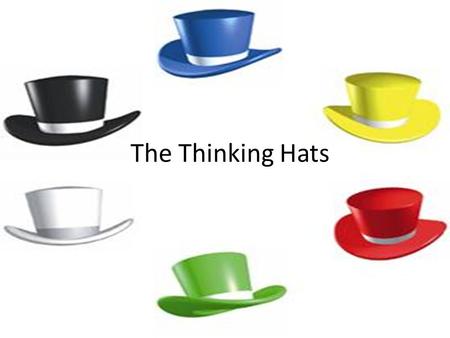 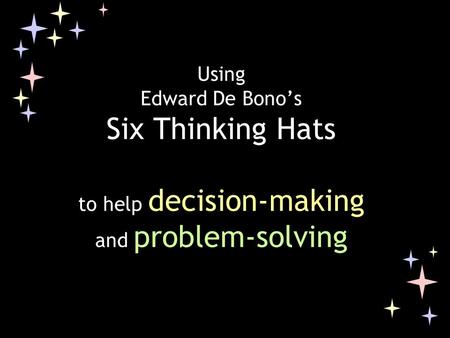 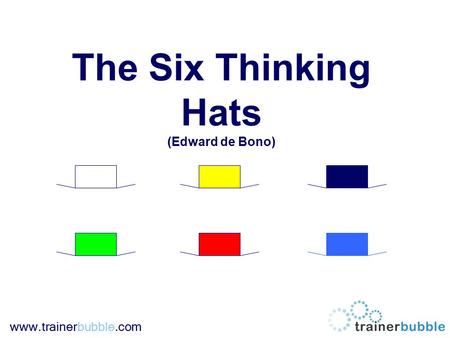 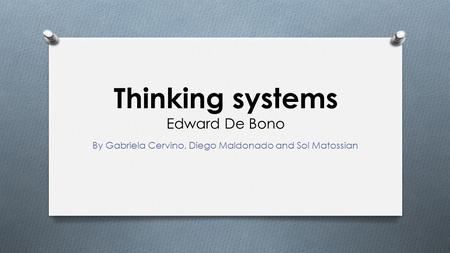